Migrations traced through the Name

Adapted from:
Was Germany once a Scythian country called "Greater Scythia”?
https://www.quora.com/Was-Germany-once-a-Scythian-country-called-Greater-Scythia/answer/Yair-Davidiy 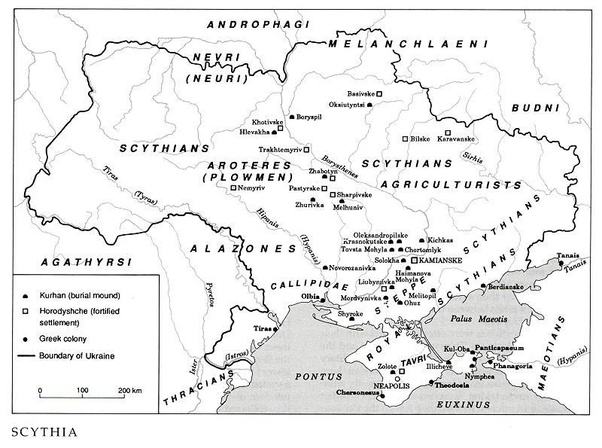 Germany at one stage was considered part of Scythia in Classical Writings. Later Germany was excluded by some, form the definition of Scythia, though still included by others. According to Snorri Surlassen (1179-1241 CE), Sweden was known as "Svithjod," i..e "Switheod," or as "Lower Switheod" as compared with Greater Switheod, which was equated with Scythia the Greater meaning at the time of Snorri, Russia.

It could be inferred from this that Sweden was considered the same as "Little Scythia" but it is not necessarily so.

The very name "Scandinavia" may originally have been a permutation of a term meaning Scythia. I never came across Germany being referred to as "Greater Scythia," though one never knows. Scythia in these cases is a geographical term but it may have had ethnic implications. 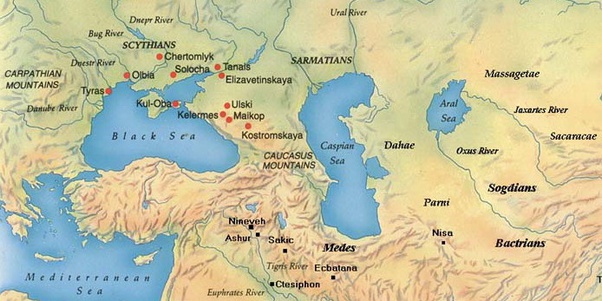 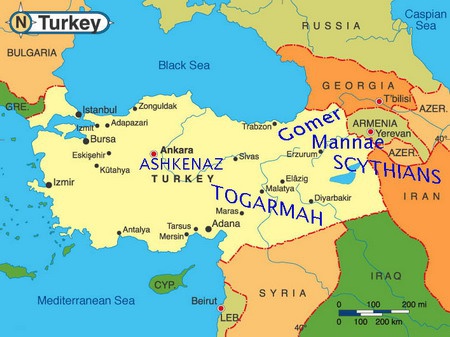 Below are some words of explanation followed by a few of the sources.

Epigraphic and archaeological evidence first finds the Scythians in the Middle East area in the regions of Armenia and Media. Their culture was Middle Eastern. Greek accounts, such as those of Herodotus, however trace them as having originated from Southern Russia. The Scythians in the Middle East did eventually move to southern Russia which together with the neighboring regions became known as Scythia. Linguistic evidence is often cited as relating them to the Iranians. This however, it has been pointed out, is not so clear-cut. Words ascribed to the Scythians sound Iranian when provenanced to regions neighboring Iranian peoples but where they dwelt by the Thracians they sound Thracian. Philip Lozinski points to evidence that by the Caspian Sea they spoke Aramaic (LOZINSKI, B. Philip. "The Original Homeland of the Parthians," Originally a paper read in Washington 1953, The Hague, Netherlands)..

There are those (such as ourselves) who trace part of the Scythians and company to the Lost Tribes of Israel. The Israelites had been exiled to different areas including the "Cities of the Medes" (2-Kings 17:6). At that time the Scythians were to be found in that region. The Scythians together with the Cimmerians were descended from Gomer son of Japhet (Genesis 10:2-3). The Exiled Hebrews federated with the Cimmerians, Scythians and Guti (Goths) and assimilated among them. This is described in symbolic terms in the Book of Hosea (ch.1) where the Prophet begats three children from a loose woman named Gomer. These children are then shown to represent the Ten Tribes who are temporarily disowned by the Almighty.

This answer however is not concerned so much with the question of ethnicity but rather with use of the name "Scythia" especially relating to Germany.

For the record it is worth remarking that "Scythia" became a name applied to geographic regions. Anyone who have ever dwelt in those areas could therefore be referred to as "Scythian."

There was anciently a people known as the "Scythians" who included the Royal Scythians, the Alans, Agathyrsi, and some of the other tribes in a Scythian federation and empire. This was in Southern Russia. Before that they had been in the Middle East south of the Caucasus. Together with Cimmerian and Israelites they had been previously employed as regular soldiers and auxiliaries in the Assyrian armies. At one stage they usurped control and took over the Assyrian Empire. The Scythians then established a center in Beth Shean in Israel and attempted to re-settle Samaria. These actions were coordinated with King Josiah son of Amon king of Judah (640-609 BCE in conventional chronology), whose reign is described in 2-Kings ch. 22, and 2-Chronicles ch. 35, and also in Rabbinical Literature. King Josiah himself had rebelled against Assyria, uprooted idolatry from Judah and the former lands of Israel, and invited the Ten Tribes to return. A few did come back but after the death of Josiah they returned to their places of exile. In archaeological terms they are identifiable as Scythians. The Scythian-Israelites had also destroyed the Philistine city of Ashkelon and raided Egypt.

Meanwhile the Assyrians had re-asserted control over their own lands. King Josiah of Judah was killed in battle against the Egyptian allies of Assyria. The Scythians joined remnants of the Cimmerians, and Medes, and Babylonians against Assyria whom they destroyed in ca. 609 BCE. The Medes betrayed their Scythian allies and massacred the leadership. Medes and Babylonians then divided the former Assyrian Empire between them. In stages they drove the Scythians northward out of the Meddle East and into Southern Russia.

Herodotus (c. 485-425 BCE) describes Scythia as more or less stretching from Southern Russia up to the Urals and Caspian Sea. Ptolemy tells us that east of them were the Sarmatians and others.

Scythians began moving out. A portion of Royal Scythians for a while occupied what is now Bulgaria. This was known as "Little Scythia." The Sarmatians advanced westward speeding the Scythian movement in that direction.

Early Greek and Roman writers applied the term "Scythia" to the whole of Northern Europe including Germany, Scandinavia and the British Isles.

Then the German presence in Germany progressively made itself felt from ca. 300 BCE. The conventional academic understanding is that the heavily forested and barren previously barely populated wastelands of what was then Germany gave rise to hordes of healthy Germans who apparently had sprung out of the ground! [I am of course being facetious but look at almost any Encyclopedia concerning the Ancient History of Germany and that it what they are trying to say, in high falutin' language!] Following increased awareness of the German presence some Classical sources no longer included Germany as part of Scythia though they do extend the term to other parts of the north. 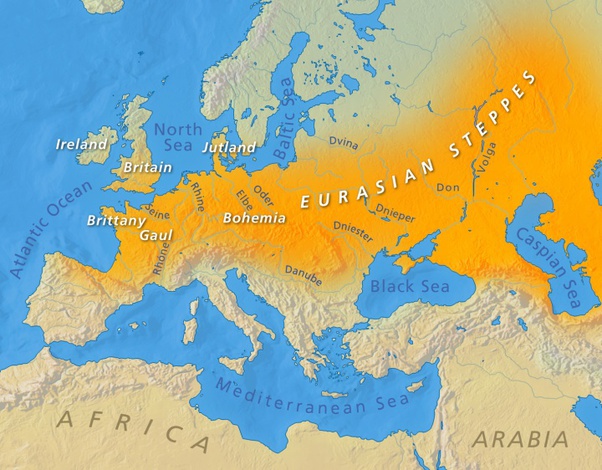 Source of Map: The Geography of Celtic-Scythian Commerce

Below are some sources:

The region known to classical authors as Scythia included:

Genetic evidence for ranging clear across the plains (steppes) from Black Sea to Lake Baikal.[14]

The Kazakh steppe: northern Kazakhstan and the adjacent portions of Russia

Sarmatia, corresponding to eastern Poland, Ukraine, southwestern Russia, and the northeastern Balkans,[15][full citation needed] ranging from the Vistula River in the west to the mouth of the Danube, and eastward to the Volga

Saka tigrakhauda, corresponding to parts of Central Asia, including Kyrgyzstan, southeastern Kazakhstan, and the Tarim Basin

Sistan or Sakastan, corresponding to southern Afghanistan, eastern Iran, and southwestern Pakistan, extending from the Sistan Basin to the Indus River. Following successive invasions of the Indo-Greek kingdoms, the Indo-Scythians also expanded east, capturing territory in what is today the Punjab region.

Parama Kamboja, corresponding to northern Afghanistan and parts of Tajikistan and Uzbekistan

Scythia Minor, corresponding to the lower Danube river area west of the Black Sea, with a part in Romania and a part in Bulgaria

"Britannia: Or a Chorographical Description of Great Britain and Ireland," written in Latin and translated into English, Volume 1, by Asonham Churchill, 1722:

Ireland was known as the Land of the Scots (Bede, Eginhardus a contemporary of Charlemange).

King Alfred in his translation of Orosius, refers to the Scots, as "Scytan" i.e. Scyths.

The Irish claimed descent from the Scythians.

The Cancani in Cantabria, Spain, were considered descendants of the Massagetae.

Ephorus and Strabo called all the nations of the north "Scythians."

Nennius seems to refer to Germany as Scythia.

The empire of the Svear was in the territory around Lake Malar near where Stockholm is today. This empire “was called the Lesser Svithiod, or Sweden, in contrast to the Larger Svithiod, or Scythia, from whence they had emigrated” (Vol.1, page 79, Scandinavia by Andrew Crichton and Henry Wheaton).

In his description of central Europe, from the Danube to the Baltic, Pliny states that,’The name of the Scythians is everywhere changed to that of Sarmatae and Germans. This old designation has not been continued for any except the most outlying sections of this nation who live almost unknown to the rest of mankind’ (Natural History, IV, xii). By outlying sections of the nation, he doubtless meant those on the north coast of Europe just mentioned. Unfortunately, the true meaning of this important statement has been completely obscured in the Loeb edition of Pliny by a mistranslation that reads: ‘The name of Scythian has spread in every direction as far as the Sarmatae and Germans.’

The reason why the name Scythian was changed was because the country immediately north of the Black Sea had long been called Scythia, but by the last century B.C., it had become occupied largely by Sarmatians.

# Scythia to the Classical authoros is a changing concept, the authors of early Imperial Rome, having defined "Germany," Scythia begins to the east of Germania, at the estuary of the Vistula; to earlier authors it may well have comprised both the eastern and northern parts of 'Germany."

"Pliny also relates that Xenophon of Lampsacus... says that three days sailing from the coast of Scythia is an enormous island called Balcia... Pytheras called this Basilia.

In the Medieval version of Fredegar, Scandinavia is called Scathanavia.

In the late Middle Ages Scandinavia was identified with the province of Skane in Sweden that previously belonged to Denmark.

The term "Scot" may have links to the ancient Persian Pahlavi term "Saka" or "Scythian". In some old Iranian dialects (such as some varaints of Digor Ossetian) "Saka" means "Friend". Some of the Alans also fused with the Khazar Turks of the Caspian Sea. Many of the Polish aristocracy identified themselves with the ancient Iranian Sarmatians/Alans. The Northern Iranians fused Greek and Persian architectural styles in what is now the Ukraine and helped found the basis of Gothic and Merovingian architecture.