Traces of Israelites in the North Ancient Geographers would take their information from several sources and apply it indiscriminately.  It often happened that the same place could be mentioned twice under different names. They also often described "Peninsulas" (half islands jutting into the sea such asJutland) as "islands."

Pliny was otherwise known as Gaius Plinius Secundus (23/24-79 CE), and referred to as Pliny the Elder (he had a nephew by the same name who was also important). Pliny was a Roman author, a naturalist and natural philosopher, a naval and army commander of the early Roman Empire, and a friend of the Emperor Vespasian. He wrote the encyclopedic Naturalis Historia (Natural History)... He had spent most of his spare time studying, writing, and investigating natural and geographic phenomena in the field.

Pytheas of Massalia whom Pliny mentions; lived in the 300s BCE, was a Greek geographer and explorer from the Greek colony of Massali (modern-day Marseille, France). He made a voyage of exploration to northwestern Europe in about 325 BC, but his account of it, known widely in Antiquity, has not survived and is now known only through the writings of others.

"Xenophon of Lampsacus tells us that at a distance of three days' sail from the shores of Scythia, there is an island of immense size called Baltia, which by Pytheas is called Basilia." [...] "Pytheas says that the Gutones, a people of Germany, inhabit the shores of an estuary of the Ocean called Mentonomon, their territory extending a distance of six thousand stadia; that, at one day's sail from this territory, is the Isle of Abalus, upon the shores of which, amber is thrown up by the waves in spring, it being an excretion of the sea in a concrete form; as, also, that the inhabitants use this amber by way of fuel, and sell it to their neighbours, the Teutones. Timeus, too, is of the same belief, but he has given to the island the name of Basilia.."

# Leaving these however, we come to the nation of the Ingevones, the first in Germany; at which we begin to have some information upon which more implicit reliance can be placed. In their country is an immense mountain called Sevo, not less than those of the Riphaean range, and which forms an immense gulf along the shore as far as the Promontory of the Cimbri. This gulf, which has the name of the 'Codanian,' is filled with islands; the most famous among which is Scandinavia, of a magnitude as yet unascertained: the only portion of it at all known is inhabited by the nation of the Hilleviones, who dwell in 500 villages, and call it a second world: it is generally supposed that the island of Eningia is of not less magnitude. Some writers state that these regions, as far as the river Vistula, are inhabited by the Sarmati, the Venedi, the Sciri, and the Hirri,...

Scholars reconstruct the intention of Pliny.
Baltia i.e. Basilia is Sweden or Scandinavia in general.
Scandinavia is also explicitly mentioned later. More ancient manuscripts of Pliny have SCADINAVIA, Scatinavia or Scathinavia or some such version.
The present form "Scandinavia" is not the original one.
Pliny has therefore mentioned Scandinavia under two names, "Scatinavia" and "Basilia" unless "Basilia" is part of the whole.
Also of interest to us is the Isle of Abalus, and the "Codanian" Gulf, i.e. the Gulf of Bothnia north of Germany and between Denmark and Sweden.

"SCATHINAVIA" could connote "Land of the Scythians." Scandinavia was identified as part of Scythia.

Adam of Bremen (ca. 1072) still referred to the Baltic Coast, including Norway, as "Scythia."

Basilia being Sweden or Scandinavia in general.
Diodorus refers to it as "Basileia."

Diodorus Siculus (v. 23):
"But as regards the tin of Britain we shall rest content with what has been said, and we shall now discuss the electron, as it is called (amber). Directly opposite the part of Scythia which lies above Galatia there is an island out in the open sea which is called Basileia. On this island the waves of the sea cast up great quantities of what is known as amber, which is to be seen nowhere else in the inhabited world".

The name "Baslia" applied to Sweden is interesting.

In Ancient Mesopotamia the region of Bashan was known as "Basil."

Bashan is mentioned in an  inscription of Gudea, king of Lagash (r. 2144-2124 BCE), who refers to  'Basalla (ba-sal-la), Mountain of the Amorites.' Gudea quarried stones for pillars from this area. "Mountain of the Amorites" could refer to the area of Bashan which had once been ruled by Amorite Kings.
The renowned Israeli archaeologists, Benjamin Mazar, pointed out that although written as Basalla,the alternations between s and sh as well as l and n are common in Sumerian. Bashan therefore was written as "Basalla." See Benjamin Mazar, "Cities and Districts in Eretz-Israel" (Jerusalem: Bialik, 1975), 184-185 [Heb.].

See:
https://hebrewnations.com/articles/archaeology/mana2.html#a2
In Biblical Times the area of Bashan east of the Jordan River was in part occupied by the Tribe of Gad.
Later the tribe of Gad became dominant in Sweden.

Bashan however was mainly in the region of Manasseh:

Deuteronomy 3:
13 The rest of Gilead, and all Bashan, the kingdom of Og, I gave to half the tribe of Manasseh. (All the region of Argob, with all Bashan, was called the land of the giants.

Dan was also associated with Bashan,

Many of the ancient Israelites  from the Ten Tribes, after being exiled and before moving to the north and west, confederated with the Scythians.
The leading group among the Scythians were known as the "Royal Scyths" or "Scythoi Baslioi." Since "Basil" in Greek connotes "Royal" it could be that "Basil" was their actual name and that the Greeks simply interpreted it to mean "Royal."

1-Kings (NKJV) 15:
20 So Ben-Hadad heeded King Asa, and sent the captains of his armies against the cities of Israel. He attacked Ijon, Dan, Abel Beth Maachah, and all Chinneroth, with all the land of Naphtali.

2-Kings (NKJV) 15:
29 In the days of Pekah king of Israel, Tiglath-Pileser king of Assyria came and took Ijon, Abel Beth Maachah, Janoah, Kedesh, Hazor, Gilead, and Galilee, all the land of Naphtali; and he carried them captive to Assyria.

The Naphtalite Huns at one stage migrated to Norway and "Abdal" was another name for them. This occurred in ca. the 500s-600s CE whereas Pliny had already recorded the name Abalus associated with Norway in his own time in ca. 50 CE.

That is the way names group. Different groups from the one ancestry tend to converge on specific regions.

Mela (ca. 43 CE)  speaks of a great bay ("Codanus sinus") to the north of Germany, among whose many islands was one, "Codanovia", of pre-eminent size.
Pliny mentioned,  "This gulf, which has the name of the 'Codanian,' is filled with islands."

He is referring to the Gulf of Bothnia in the Baltic Sea between Denmark and Sweden.

"Roman Reflections: Iron Age to Viking Age in Northern Europe," by Klavs Randsborg, 2015, p. 141:
Pomponius Mela also mentions  the "Bay of Codanus, but in two separate tales: in the first one it is 'above the Elbe, full of large and small islands sometimes flooded by the sea' [III; 31 f, III;54f]; in the other, it has seven islands, the biggest and most fertile of these being called 'Codanova' or in another version 'Scatanavia' as in Pliny. Clearly the latter "Codanus' is the Catteget/Baltic Sea....

In addition  to Codanus being the Gulf of Bothnia we would suggest the name was also given to the north German coast adjoining it. Further to the west we found the name CAUDINGE on the site of what became Hamburg. We saw how etymologically the name Caudinge may have been a form of "Sidon" the major city of Phoenicia. See  Identifying Sidon. The same reasoning applies to the name "Codanus". This too may be named after Sidon. 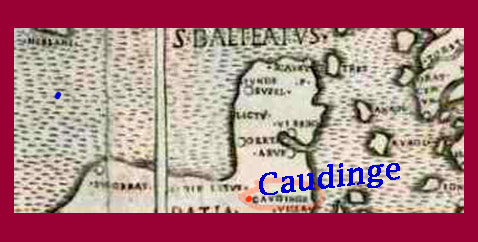 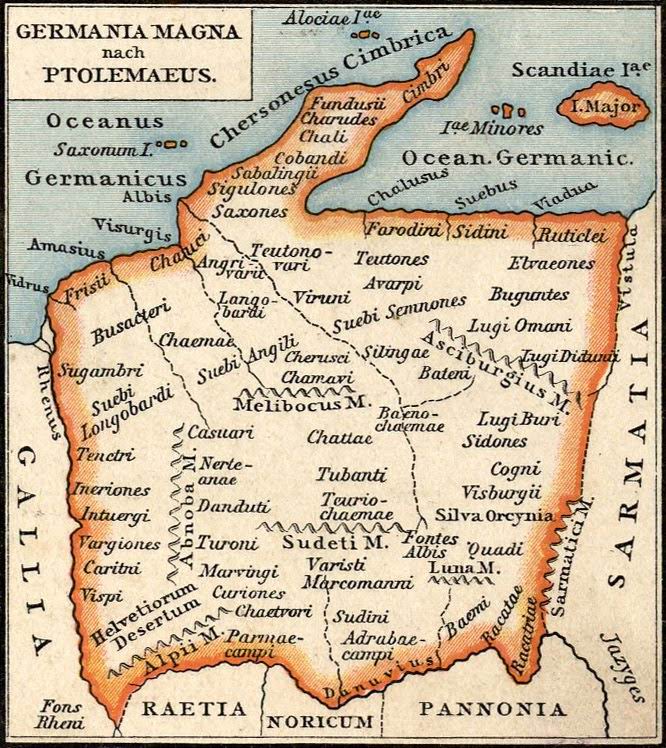 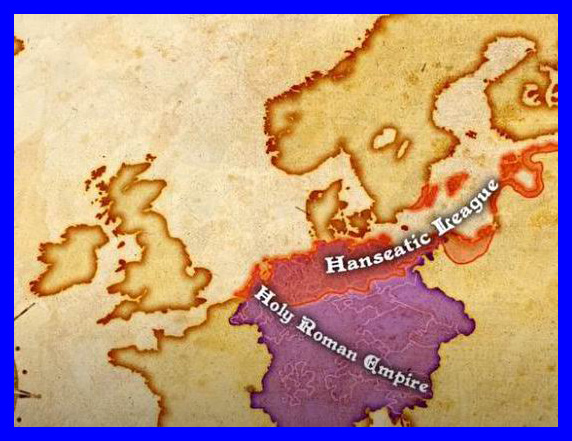 Ptolemy mentions the SIDINI people along the northeast coast of Germany east of Hamburg and Lubeck.