Dan, Oriel, and Ireland. The Book of Micah with Brit-Am/Hebrew Awareness Commentary

8 Rejoice not over me, O my enemy;
when I fall, I shall rise;
when I sit in darkness,
the LORD will be a light to me.

Concerning the expression,
# when I sit in darkness, the LORD will be a light to me (Micah 7:8) #

On this verse the Midrash commented:

# From the north Darkness comes to the world. This is paralleled by the Tribe of Dan.
How is that?
The Tribe of Dan caused darkness to enter the world. When Jeroboam son of Nebat made the two calves of gold he passed them before all the other Tribes and none of them wanted them in their oportion exscept the Tribe of Dan.

1-Kings (ESV) 12:
28 So the king took counsel and made two calves of gold. And he said to the people, 'You have gone up to Jerusalem long enough. Behold your gods, O Israel, who brought you up out of the land of Egypt.' 29 And he set one in Bethel, and the other he put in Dan. 30 Then this thing became a sin, for the people went as far as Dan to be before one.

For this reason the Almighty pre-ordained that Dan should be in the north.

Dan was set out last since whoever worships idols is set last and not first.
In the same way as God created four directions parallel to the four camps of Israel [when camped around the Tabernacle, the 12 Tribes were  divided into 4 groups of 3] so too has HE placed 4 angels around his throne, Michael, and Gabriel, Oriel, and Rafael.
Michael to his right parallel to Reuben [in the south]... Oriel to HIS Left parallel to Dan in the North. Why is he called "Oriel" ["Ori-El", Light of God]? To represent the Torah, Neviim [Prophets], and Ketuvim [Writings] [i.e. Tananak] through which God makes atonement for him, and illuminates Israel, as it says,  "when I sit in darkness, the LORD will be a light to me" Micah 7:8 ( Source: Midrash BaMidbar Rabah 2;9, Midrash Pesiktah Rabati 47;3). 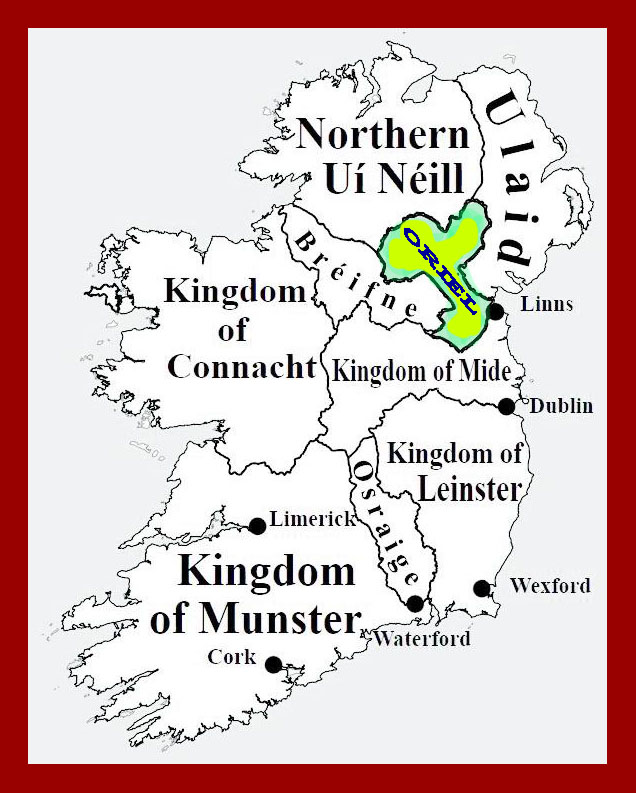 We see above that Dan was in the north where darkness comes from and is parallel by the angel Gabriel. We identify the Tribe of Dan with people in Denmark and in Northern Ireland. In Denmark they are part of Scandinavia and close to the North Pole.

We see above that Dan was in the north where darkness comes from and is paralleled by the angel Gabriel. The 12 Tribes of Israelites when camped around  the tabernacle were divided into 4 camps of 3 Tribes each. The Camp of Dan consisted of Dan, Naphtali, and Asher. We identify the Tribe of Dan with people in Denmark and in Northern Ireland. Naphtali is to be found in Ireland, and Asher in Norway.
Denmark and Norway  are part of Scandinavia and close to the North Pole.

https://www.thelocal.dk/20191223/dont-despair-the-days-are-already-getting-longer-in-denmark
Denmark's dark winters aren't as severe as in Scandinavian neighbours Sweden and Norway, which both experience polar nights - when the sun doesn't rise at all for several weeks.
The long hours of darkness can still be felt in Denmark, however.

We see that the Midrash understood the Tribal positioning around the Tabernacle to represent future locations BOTH in the Land of Israel and later after Exile in their present locations.

We also saw from the Midrash that the Angel Oriel was parallel to Dan in  the North. In the Land of Israel the tribe of Dan was at first in the southwest on the coast but later many moved northward (Joshua 18, Judges 19). We found part of the Tribe of Dan in Northern Ireland and another part in Denmark. In Ireland they were known as the Tribe of the God Dana, and in Denmark as the Danes.
Oriel was the name of the Kingdom in Northern Ireland!

Airgialla
From Wikipedia, the free encyclopedia
Airgiall  (Modern Irish: Oirialla, English: Oriel, Latin: Ergallia) was a medieval Irish over-kingdom and the collective name for the confederation of tribes that formed it. The confederation consisted of nine minor kingdoms, all independent of each other but paying nominal suzerainty to an overking, usually from the most powerful dynasty. Airgialla at its peak roughly matched the modern dioceses of Armagh and Clogher, spanning parts of counties Armagh, Monaghan, Louth, Fermanagh, Tyrone and Londonderry. Its main towns were Armagh and Clogher. The name's usage survives as a cultural area of folk tradition in South East Ulster and adjoining areas of County Louth.

Originally thought to have been under the dominance of the neighbouring Ulaid to the east, the territory of the Airgialla from the 6th century onwards was gradually eroded by the encroachment of their northern neighbours, the Cenol nEogain of the Northern Ui Neill,  as well as the Southern Ui Neill to their south. From 735 they fell under the dominance of the Cenel nEogain, and by 827 had become their vassals.o The kingdom of Airgialla was at its peak in the 12th century, under king Donnchad Ua Cerbaill. The later constricted kingdom of Airgialla survived in Monaghan, which was known as Oirghialla and Oriel after the Norman Invasion of Ireland, under the Mac Mathghamhna, until the end of the Gaelic order in Ireland.

9 I will bear the indignation of the LORD
because I have sinned against Him,
until he pleads my cause
and executes judgment for me.
He will bring me out to the light;
I shall look upon his vindication.

God might be angry with me. Fair enough. I will grin and bear the punishment and keep on praying and bettering my ways.
God will forgive me and then help me pick myself up.

10 Then my enemy will see,
and shame will cover her who said to me,
"Where is the LORD your God?"
My eyes will look upon her;
now she will be trampled down
like the mire of the streets.

The Prophet here switches from his own individual situation to the national collective one. What we said above was indeed pertinent to the singular private person. It was also symbolic of the Nation as a whole. The Prophet has now begun to address the Israelite Nations as one people.
The Jews and the Ten Tribes at some level always believed in God. Western Peoples, especially English-speaking ones to a degree were guided by the Bible. They had a Judeo-Christian ethic.
Other nations despised us for this.
Their end will come.
The way our inner heart told us to go, though we neglected to do so, we now realize was the correct one.
In continuation the Prophet speaks of the Ingathering and Return of Judah and the Ten Tribes in the End Times!