The Future Tasks of Ephraim

The Bible and Rabbinical Commentary indicate that the Lost Ten Tribes in the End Times, especially Joseph and Ephraim,  will be a World Power. They will have been a World Power throughout their history in order to fulfil the Task they had to civilize humanity. We therefore should expect to find them among one or other of the World Powers and not elsewhere! The Bible says that Ephraim was destined to rule!
By "Ephraim" we identify the Ten Tribes in general especially the Tribes of Joseph. The sons of Joseph were Ephraim and Manasseh. Both Britain and the USA contain within them many descendants of Ephraim. In the USA however Manasseh is more dominant.
In Biblical terms however "Ephraim" can refer to all of the Ten Tribies, or to both the Tribes of Ephraim and Manasseh, or to the Tribe of Ephraim as distinct from the other Tribes. It all depends on the context. In this present talk we shall refer to the Commentaries of Rabbi Moshe David Vale.

Rabbi Moshe David Valle (also occasionally spelt "Valley," or  "Vali"), 1697-1777, Padua, west of Venice in Northern Italy.
Rabbi Valle was  the author of a Comprehensive Commentary on nearly all books of the Bible. He was also a philosopher, a doctor of medicine, and an astronomer. Most of his works remained in manuscript form until recently being published in Jerusalem by Rabbi Joseph Spinner. Rabbi Valle probably influenced Rabbi Moshe Chaim Luzzatti (RAMCHAL) who attended the lectures of Rabbi Valle and wrote a poem in praise of him. RAMCHAL in many ways is considered one of the foremost Rabbis of his time and even of all time. The influence of Rabbi Valle on RAMCHAL in  itself would be enough to earn him a place in history. In addition to that, the works of Rabbi Valle have only just been released even though they were written more than 400 years ago. As times passes appreciation for Rabbi Valle will grow and already is steadily growing.
A lot of the work of Valle uses Kabbalistic terminology which is too abstruse for our needs. Nevertheless, aside from the Kabballah there is a great deal on  the straight-forward literally-intended level that we can use.
Rabbi Valle has a similar understanding concerning Joseph and the Ten Tribes to that which Brit-Am has.
Judah, i.e. the Jews,  has primarily to learn and develop its understanding and practice of the TORAH.
The task of Joseph is to elevate and civilize the Gentile Nations. In the End Times Judah and the Ten Tribes will unite.

Valle interprets Biblical verses (Genesis 49:11) to say that "Aigallah" is name of the Force through which the Messiah will rule the world. 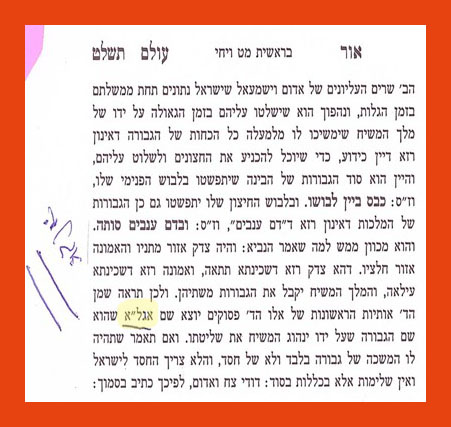 In our work "Hebrew Tribes" we have shown that "Aggiloi" was one of the names of the Angles before they invaded what became England.
Aigallah and Aggiloi in Hebrew Lettering are virtually the same name.
So too, the Soumboi Aggiloi were a branch of the Angles combining "Soumbioi" from  Shemida of Manasseh with the  Anglo-Aggiloi  of  Ephraim.

Biblical verses indicate the future Rule of Israel (especially Joseph - Ephraim and Manasseh) over the Gentiles in the End Times:

PSALMS 47:
1 O CLAP YOUR HANDS, ALL PEOPLES; SHOUT TO GOD WITH THE VOICE OF JOY. 2 FOR THE LORD MOST HIGH IS TO BE FEARED, A GREAT KING OVER ALL THE EARTH. 3 HE SUBDUES PEOPLES UNDER US AND NATIONS UNDER OUR FEET. 4 HE CHOOSES OUR INHERITANCE FOR US, THE GLORY OF JACOB WHOM HE LOVES.

MICAH 5:
8 THE REMNANT OF JACOB WILL BE AMONG THE NATIONS, AMONG MANY PEOPLES LIKE A LION AMONG THE BEASTS OF THE FOREST, LIKE A YOUNG LION AMONG FLOCKS OF SHEEP, WHICH, IF HE PASSES THROUGH, TRAMPLES DOWN AND TEARS, AND THERE IS NONE TO RESCUE.
RABBI VALLE SAYS THAT EPHRAIM INFLUENCES THE REST OF ISRAEL AND ALL OF MANKIND!

HOSEA 13:
1 WHEN EPHRAIM SPOKE, TREMBLING,
HE WAS EXALTED IN ISRAEL.
BUT HE INCURRED GUILT THROUGH BAAL WORSHIP AND HE DIED.

Ephraim will be a power in the world. Rabbi Valley says that all mankind is influenced through Ephraim. When Ephraim transgresses in his deeds and opinions he engenders division and contention to themselves and to all of Israel. This is what is meant by the expression "trembling" (Hosea 13:1). In Hebrew the word is "retet." It connotes "reverbation." When Ephraim speaks or acts it has a resonating effect on the rest of Israel and on the world in general.

Judah was also Punished for Not Reforming the Ten Tribes!
Rabbi Valley understands Hosea to say that Judah was also to be Punished because of Ephraim! Judah did not attempt to turn Ephraim back to the right track. Consequently, says Rabbi Valley, they themselves were influenced by the Ten Tribes and were to be punished in a similar way as to they had been.

Ephraim has "an innate purity. "

cf.
HOSEA (NKJV) 14:
1 O ISRAEL, RETURN TO THE LORD YOUR GOD,
FOR YOU HAVE STUMBLED BECAUSE OF YOUR INIQUITY;
2 TAKE WORDS WITH YOU,
AND RETURN TO THE LORD.
SAY TO HIM,
TAKE AWAY ALL INIQUITY;
RECEIVE US GRACIOUSLY,
FOR WE WILL OFFER THE SACRIFICES OF OUR LIPS.

Rabbi Moshe David Valley opines on the above:

14:2 Valle. # ... The impurity and debasement of the Ten Tribes was not their true nature. The Power of Repentance can elevate a Person to a greater height than he ever had before.
The Israelites have an innate purity. They therefore do not have to try very hard to return to where they should have been if they had not sinned.
The non-Israelite people are not like this.... #

The Ten Tribes needed to Reform the World!

HOSEA (NKJV) 14:
8 EPHRAIM SHALL SAY, 'WHAT HAVE I TO DO ANYMORE WITH IDOLS?'
I HAVE HEARD AND OBSERVED HIM.
I AM LIKE A GREEN CYPRESS TREE;
YOUR FRUIT IS FOUND IN ME.

Valle: # It is a known matter that Israel did not descend into the Realms of Pollution other than for the Need to Clarify his Destiny. He needed to fulfill the will of God and reform the world through redirecting its forces. When this is done they shall return to their Source. There will be no need to remain in that situation any more. This is the meaning of,  'Ephraim shall say, 'What have I to do anymore with idols?'" (Hosea 14:8). #

The Task of Ephraim, of the Lost Ten Tribes was to civilize humanity and at the End of Time welcome the Messiah son of David.

The Messsiah has not yet come. In the meantime we can all lead good lives, pray to the Almighty, and help Brit-Am/Hebrew Awareness spread this message.