^^^^^^^^^^^^^^^^^^^^^^^^^^^
1. Introduction. The Gate of His Enemies.
Brit-Am/Hebrew Awareness proves that the Lost Ten Tribes are to be found mainly among Western Peoples. The Jews are Judah.  The Ten Tribes comprise part of the populations of the USA, Canada, Australia, New Zealand, South Africa, Ireland, North Ireland, Scotland, Wales, England, France, Belgium, Switzerland, Netherlands, Denmark, Norway, Sweden, Finland. Each one of these nations to a smaller or greater degree is dominated by a specific Israelite Tribe.  The English-speaking peoples are mainly from the Tribes of Joseph, Ephraim and Manasseh.
Joseph was to receive the Blessing promised to all Israel Tribes but to a much more pronounced degree.
See:
Genealogy of the Blessings
https://hebrewnations.com/articles/biblical-proof/genb.html

One (out of many) of our proofs affirming Tribal Identity is the Possession of International Strategic Points, see:

Gates of the Enemy.
Possessing Major Strategic Points is a Biblical Proof of Israelite Descent.
https://hebrewnations.com/articles/biblical-proof/blessings/blessgates.html

Genesis 22:
17 THAT IN BLESSING I WILL BLESS THEE, AND IN MULTIPLYING I WILL MULTIPLY THY  SEED AS THE STARS OF THE HEAVEN, AND AS THE SAND WHICH IS UPON THE SEA SHORE; AND THY  SEED SHALL POSSESS THE GATE OF HIS ENEMIES;

Genesis 24:
60 AND THEY BLESSED REBEKAH, AND SAID UNTO HER, THOU ART OUR SISTER, BE THOU THE MOTHER OF THOUSANDS OF MILLIONS, AND LET THY SEED POSSESS THE GATE OF THOSE WHICH HATE THEM.

Our interpretation of "Gates" to main strategic foci and pathways of international importance was confirmed by the Midrash. Several of the nations identified by us as Israelite in their history fulfilled aspects of this blessing, Denmark once controlled access to the Baltic Sea at a time when that was important.
The Netherlands had an Empire based on the same principles and so did France.
Netherlands it was Great Britain that developed the concept as a guiding principle and at one stage controlled nearly all major strategic points on the planet that had some relevance to its trading and foreign policy needs.
In our time the USA has taken over and in its own way even excelled the achievements of Britain on this point.
We have written several articles on this subject as well as exploring it at length in several of our books, e.g.

"To Rule the World. How the British and Americans Proved they descend from Joseph & the Ten Lost Tribes,"  and others.
https://hebrewnations.com/publications/books/ruleworld.html

For articles, See:
Ruling the World. More on the Blessing to Joseph and Ephraim
https://hebrewnations.com/articles/biblical-proof/attributes/ruling.html

China and Israel. An Example of Possessing "the Gates of the Enemy" in Action
https://hebrewnations.com/articles/biblical-proof/blessings/china.html

To Rule the World. Policeman of the Globe: A Proof of Israelite Descent
https://hebrewnations.com/articles/biblical-proof/blessings/rule.html

Recently, on Quora a question was asked,
Why does the United States need 900 military bases around the world?
https://www.quora.com/Why-does-the-United-States-need-900-military-bases-around-the-world

There were numerous (more than 50) replies to this query. We too may add one of our own.
Nearly all the answers had something to say. Some of them had valuable items of information and informative insights.
All this is relevant to Brit-Am Beliefs.

In the article below we have given extracts from some of the different answers citing the points that most resonated with our own understanding.

Third, a lot of nations actually want these military bases in their territory, for a variety of reasons. Mainly, however, it's to provide extra security. It invokes the promise of the US helping its allies out in a time of crisis. Think of Japan, South Korea, and their relationship with the US. Europe has a similar relationship with the US. This means that these countries don't have to spend as much on their military, so they can focus on their own economies and making them grow.

When it helped rebuild Europe after WWII, US got favorable trade agreements and contracts for its own companies. Thus, the 50s was a big period of prosperity for the Americans. And same strings gets attached to a lot of US favors

However, the key you can derive is, US forces are concentrated around the key trade routes - Panama Canal, Suez Canal, Malacca Straits and around Japan & Europe, where its key rivals [China and Russia] are to be checked. On the other hand, there are almost no bases in South America, most of Africa - where there are no key trade routes.

Like the various major powers in the past, US coordinates among the small nations and provides security in return for key access for its companies.

... this was not necessarily done out of compassion by the US, but it just so happened that the conditions and desires the United States wanted for itself to thrive, were really, REALLY awesome and beneficial for other parties too. Americans realized that peace was more profitable than war, and they were the only nation with the means to carry out the implementation of free trade. ...history tells us that the countries we have bases in want our bases. They want our security. And now, they profit from the greatest era of economic growth and peace in world history ...

For global free trade to thrive, it needs to be protected by one power (or alliance). If two or more large powers have conflicting interests in trade, you get massive wars like the ones seen in the first half of the 20th century. If you have one, overwhelming power, global trade can (and has) thrived, incentivizing the profitability of peace and trade, over war. In order to enforce this overwhelming power, a world-wide global military presence needs to exist. If there is a threat to free trade in Asia or Europe, it's easier to respond from Singapore or Ramstein (Germany), than it is from Norfolk.

Proximately, we need these bases for force projection. Roughly put, force projection is the ability of a state to apply its power at a given location. The US has the ability to apply military force anywhere on Earth, in most cases within 24 hours. Other countries have a military which can defend their territory and invade neighboring countries. The USA can defend our territory, the territory of entire other countries, and invade multiple other countries. This kind of force projection is a logistical nightmare; to accomplish it we have bases throughout the globe, many of which have significant forces in a high state of readiness. ...

However you slice it, America likes to be in charge. One of the major ways we do this is by controlling the warfighting capabilities of other countries. We do this in a number of ways. One of the more overt is by siting bases in allied countries: in addition to defending the allied country, it makes their own military somewhat redundant, which allows them to devote resources elsewhere. If an allied country wished to engage in hostilities without the blessing of the US, they would find their defensive posture greatly weakened, and of course if they sought to attack a US ally, they would be facing a military force far greater than the other nation could possibly field.

One of the other ways the US controls the military abilities of other countries is with foreign aid. We sell top-of-the-line military hardware to other countries; this gives them hardware which is far superior to what their opponents may have and they don't have to spend money on R&D. But they are beholden to the US for replacement parts and expertise. The effectiveness of this particular strategy was demonstrated in the Iran-Iraq war of the 80s: by withholding spare parts for the Iranii military, the US crippled what had once been the dominant military in the region.

The main reason is Full Spectrum Dominance. United States is arguably going to become the largest empire in human history. It may well be so already.

This is a formidable (and some may think shocking statement) but even though the United States government does not literally paint the globe in its own 'colour' it effectively controls those lands. The airspace, ports, undersea and oversea lanes, physical landmasses and now even cyber space and atmospheric outer space are under control. There has not been such as expansive entity as this.

At the end of the Second World war, our roads, bridges, homes, factories and schools were intact and unscathed, while the rest of the world lay in ruins. The geographical advantage of having two very large moats or oceans on either side of the homeland and friendly neighbors and allies on the North and South shielded our civilian population and infrastructure. ...

This worldwide capability to project power whenever we feel the need is a vital component to our defense and a lynchpin of our military influence.

The overseas bases are irreplaceable in that respect. Should a major war develop, we'll have the ability to begin the fight on someone else's soil, rather than our own. Very few wars have been won by fighting them on your home soil and no nation in modern history has ever successfully beaten back an all out invasion of their country. By the time an enemy attacks your borders, it's too late.

We became a world superpower by fighting the Germans in Europe, not New York and the Japanese in the Pacific, not Los Angeles.

United States is the largest contributing member of the UN Security Council which is basically the worlds police. And the world needs a lot of policing that most member nations don't want to be responsible for even though they commit to spending 2% of GDP on their own defenses which most countries don't actually spend.

A hundred years ago there was a German empire around the world. Then after WW1 the allies took over all German colonies and territories. Germans resented this loss for years until Hitler's Nazis invaded its European neighbours causing WW2. German's lost again but this time the UN was formed and since then a large number of US bases have been permanently stationed not only in Germany but also in Japan, South Korea and Hawaii. Other bases are established wherever there is need for policing such as in Kuwait after Saddams Iraqi armies invaded, and in Afghanistan where Taliban and AlQuaeda harboured terrorist fugitives and many other places around the world at different times of conflict.

How many countries does the US have its military stationed in?
https://www.quora.com/How-many-countries-does-the-US-have-its-military-stationed-in

The U.S. Department of Defense's Defense Manpower Data Center (DMDC) publishes quarterly, public reports about the locations of America's military personnel -   at least to the extent that can be declassified. 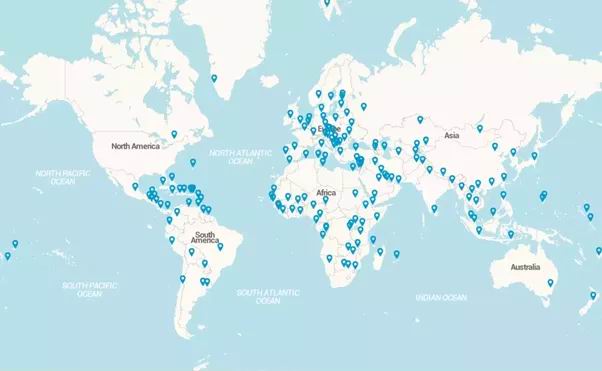 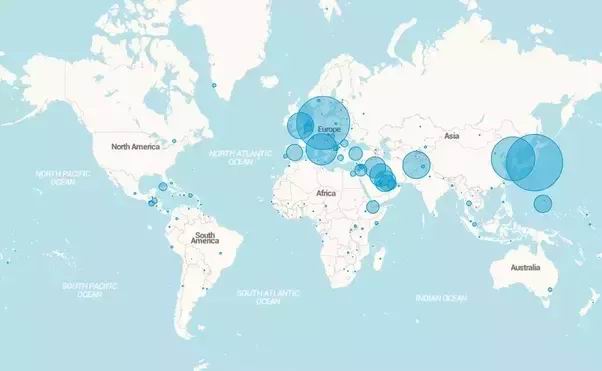