Ancestors and Descendants of the First King of Israel 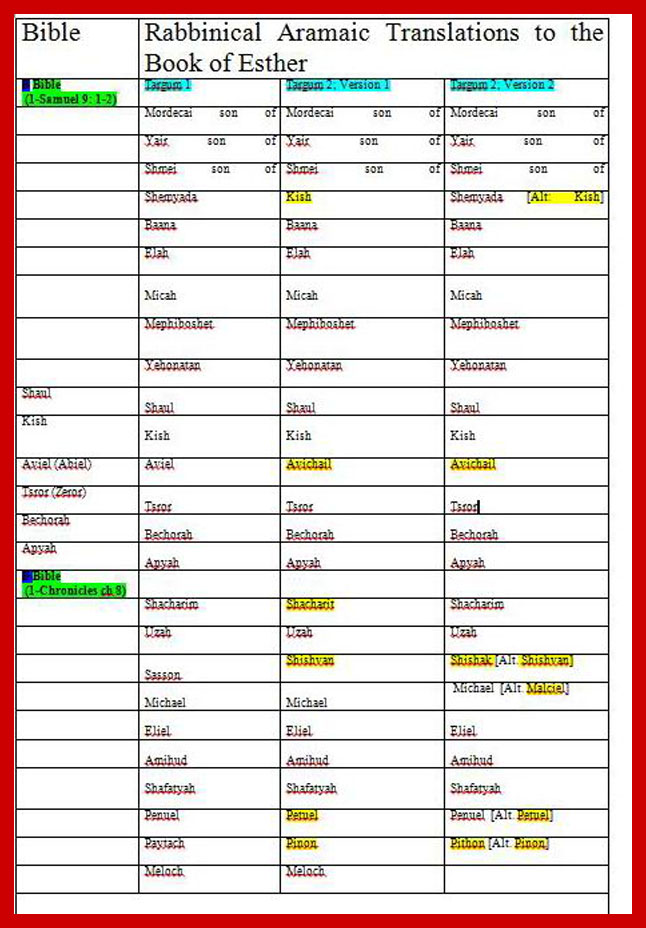 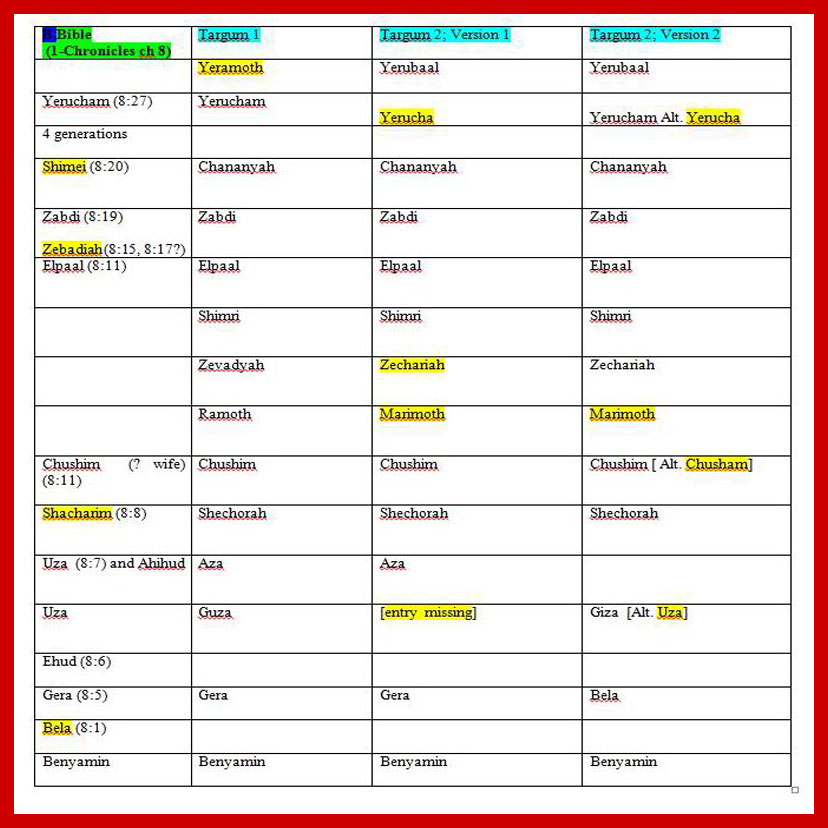 Introduction. Many are Interested in the Tribe of Benjamin

King Saul was from the Tribe of Benjamin. We have written somewhat more about this Tribe, than we have for some of the others, and also produced Video Clips on it. There was no conscious reason for this.
It just turned out that way. Surprisingly a large number of people expressed interest and appreciation for what we had written.
The following article is in response to a request by our friend, Michael Greenwood.
Part of the sources were supplied by Rabbi David Feldman on behalf of Brit-Am.
Yair Davidiy was responsible for the editing and for an attempt to unravel and reconcile the genealogical trees.

The articles in its present state does not gibve any definitive directions. Many points are still confused. Nevertheless it has value as an initial attempt that others may build on.

King Saul was a descendant of Bela son of Benjamin son of Jacob son of Isaac son of Abraham the Hebrew.

One of the brothers of Bela was named Gera and so was a son of his. This has caused confusion in some genealogical lists.

We find here 7 Names including Bela as a separate name apart from his two sons, Ard and Naaman.

Comparing the two lists we find in both lists the names Bela, Ashbel, Naaman, Ard.

Zeev Erlich  points out that the problem of not being able to associate family names with previously mentioned ones is a recurring occurrence with Benjamin.

We often find that Biblical personalities were  known by more than one name. This can confuse understanding their genealogies.
An example is  Jeiel, the father of Gibeon, who was the father of Kish father of Saul.

We see here that Jeiel was known as the father of Gibeon. He begat Ner who begat Kish who begat Saul.

1-Samuel 10:
21 Then he brought the tribe of Benjamin near by its families, and the Matrite family was taken. And Saul the son of Kish was taken; but when they looked for him, he could not be found.

From the above we see that Saul belonged to the Matri (Matrite) family. We know little about it. The name "Matri" is believed to derive from the word-root "matar" meaning rain, or from an Aramaic-related root "Natar" connoting guardian or protect.

Zeev Erlich  points out that there is a place name, "Chuirvat el-Matri,"  literally meaning in Arabic: "The Ruin of Matri". This is close to place-names in the territory of Benjamin such as Giveon (Gibeon) and Ha-Kafira.

From 1-Chronicles ch. 8 we may tentatively trace the ancestry of Saul back to Bela firstborn son of Benjamin

Kish was the brother of Abdon sons of Jeiel, possibly sons of Shashak.

Here are extracts from the passage:


Going backwards from Saul we obtain the following lineage:

Saul - Kish- Ner -  Jeiel (lived in  Gibeon. 8:29, before that his forefather had been in the Benjaminite section of Jerusalem) - Jeiel appears to have been one of the brothers (under another name of Shashak, 8:14), -  Elpaal (8:11) - Shaharaim (by Hushim his wife) - Ehud (8:6, he may have been the grandfather of Shaharaim and perhaps Ahidud his son was the father of Shaharaim (8:7) - Huram (or one of his brothers, sons of Bela, son of Benjamin.

The ancestors of Saul had dwelt in Gibeon (pronounced "Giveon").

1-Chronicles 8:
29 Now in Gibeon, Jeiel, the father of Gibeon lived, and his wife's name was Maacah; 30 and his firstborn son was Abdon, then Zur, Kish, Baal, Nadab, 31 Gedor, Ahio and Zecher. 32 Mikloth became the father of Shimeah. And they also lived with their relatives in Jerusalem opposite their other  relatives.

1-Samuel 14:
50 The name of Saul's wife was Ahinoam the daughter of Ahimaaz. And the name of the captain of his army was Abner the son of Ner, Saul's uncle.

The Wives of Saul

It is usually accepted that Saul had two wives:

1-Samuel 21:
8 So the king took the two sons of Rizpah the daughter of Aiah, Armoni and Mephibosheth whom she had borne to Saul....

Continued at: Descendants of Saul