A Collation of Sources 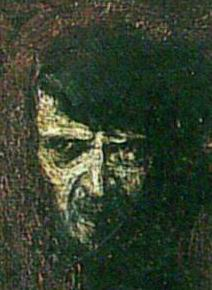 Detail from a painting in 1889 by Franz von Stuck depicting “Wotan.” This is what Hitler modeled himself upon, see Below.

The question, or the quotation it is based upon, is not sufficiently specific. There are many "heros" in German Mythology. The main heroes however seem to be Thor and Wotan, also known as “Odin.” 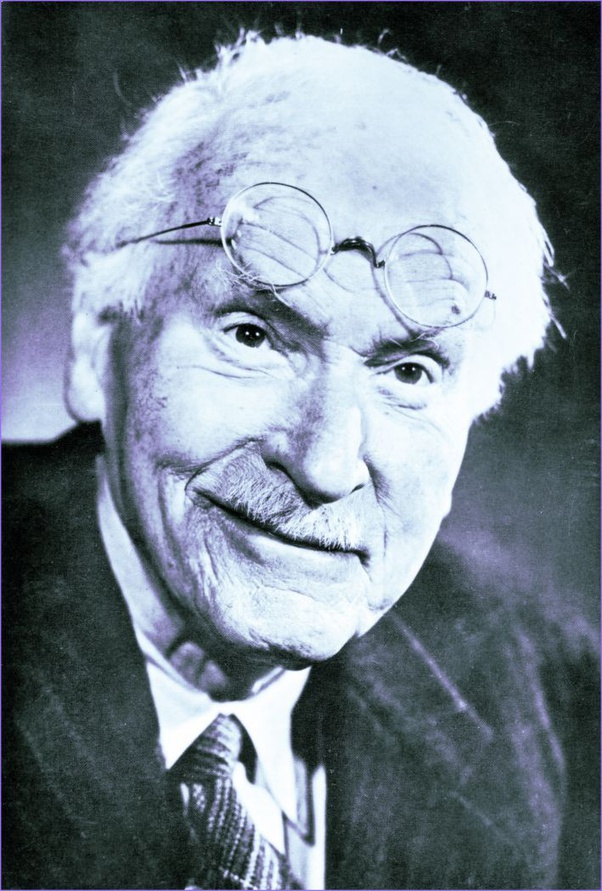 Carl Gustav Jung (1875 1961), often referred to as C. G. Jung, was a Swiss psychiatrist and psychotherapist. He helped found Analytical Psychology. The work of Jung (pronounced as “Yung”) has been influential not only in psychiatry but also in philosophy, anthropology, archaeology, literature, and religious studies. Jung claims to have never been pro-Nazi. Nevertheless his writings at the time of the Nazi rise to power and concerning it seem to indicate some degree of identification with the subject matter. Jung saw the figure of Wotan, as “the truest expression and unsurpassed personification of a fundamental quality that is particularly characteristic of the Germans.” Jung considered Wotan to be represented in his time by Hitler. Jung saw both Hitler and Wotan as the one embodiment of the Ideal of Germany. Hitler also played with such notions.

The god Wotan traditionally had been depicted as a “Wild Hunter” deity characterized by a "Teutonic" rage. He would appeared in the skies of Germany inspiring the Germans. Wotan was the god of the wind and of the dead. In North Germany he was associated with the "Wild Hunt" and in south Germany with an enraged host of spiritual beings riding the skies. The peasants of North Germany when they heard a howling in the air would say ''Wode Hunts" (Wodejaget). Wotan was believed to be marching at the head of his heroes accompanied by his wolves who followed him, taking delight in strife, and pouncing upon the bodies of the fallen. In the years leading up to WW2 numerous Germans reported seeing Wotan in their dreams. Jung wrote much on this. Wotan had come to represent the archetype of Germanic racial nationalism. Wotan was awakening.

# "The Hitler movement literally brought the whole of Germany to its feet, from five-year-olds to veterans, and produced the spectacle of a nation migrating from one place to another. Wotan the wanderer was on the move."

Wotan disappeared when his oaks fell and appeared again when the Christian God proved too weak to save Christendom from fratricidal slaughter.

I venture the heretical suggestion that the unfathomable depths of Wotan's character explain more of National Socialism than all economic, political and psychological factors put together.

The gods are without doubt personifications of psychic forces..

And when one is possessed by such a god there is not much one can do about it and in the case of Wotan we're talking about a fundamental attribute of the German psyche.

Wotan is a restless wanderer who creates unrest and stirs up strife, now here, now there, and works magic. He was soon changed by Christianity into the devil, and only lived on in fading local traditions as a ghostly hunter who was seen with his retinue, flickering like a will o' the wisp through the stormy night. In the Middle Ages the role of the restless wanderer was taken over by Ahasuerus, the Wandering Jew, which is not a Jewish but a Christian legend. The motif of the wanderer who has not accepted Christ was projected on the Jews, in the same way as we always rediscover our unconscious psychic contents in other people. At any rate the coincidence of anti-Semitism with the reawakening of Wotan is a psychological subtlety that may perhaps be worth mentioning. ...He is the god of the storm and frenzy, the unleasher of passions and the lust of battle; moreover he is a superlative magician and artist in illusion who is versed in all secrets of an occult nature. #

Note what Jung is saying: Wotan represented something about German origins in ancient times. He had been half forgotten, changed by Christianity into the devil and made into a ghostly hunter seen in visions of a stormy night. The Jews had replaced him and taken over his role. Now he is coming back. His return is accompanied by a rejection of Christianity. This goes together with the abnegation of the Jews.

'Hitler seemed like the 'double' of a real person, as if Hitler the man might be hiding inside, and deliberately so concealed in order not to disturb the mechanism.... You know you could never talk to this man; because there is nobody there.... It is not an individual; it is an entire nation.'

“He is a medium, German policy is not made; it is revealed through Hitler. He is the mouthpiece of the Gods of old… He is the Sybil, the Delphic oracle” (see Jung in Contexts, ed. by Paul Bishop, 1999).

The researcher Richard Koenigsberg has quoted Dr. Otto Dietrich, the Press Secretary of Hitler, in 1936, as saying:

The cult of Wotan in Germany in its early stages was linked in Gaul and West Germany with the figure of Esus and his consort "Ros Merta" (The Magnificanet Red-one) . This too connects back with Esau.

The name “Wotan” is another form of the cognomen “Edom” who was also known as Esau, the hirsute, rufous and hunting brother of Jacob. The name of Jacob was changed to that of Israel (Genesis 32:28, 35:10. Esau-Edom was his brother.

Another name for Odin was “Kos” (Theta p.17 quotes from Kemble, "Saxons in England" vol.1, p.370). The national god of the Idumeans of Edom southeast of Judah was also known as Kas or Kos. This may be a dialectical version of Esau.

Genesis (NASB) 25:
27 When the boys grew up, Esau became a skillful hunter, a man of the field, but Jacob was a peaceful man, living in tents.

Genesis (NASB) 27:
40 By your sword you shall live,
And your brother you shall serve;
But it shall come about when you become restless,
That you will break his yoke from your neck.

Genesis (NASB) 27: 41 So Esau bore a grudge against Jacob because of the blessing with which his father had blessed him; and Esau said to himself, ‘The days of mourning for my father are near; then I will kill my brother Jacob.’

Amos (NASB) 1:
11 Thus says the LORD,
For three transgressions of Edom and for four
I will not revoke its punishment,
Because he pursued his brother with the sword,
While he stifled his compassion;
His anger also tore continually,
And he maintained his fury forever. 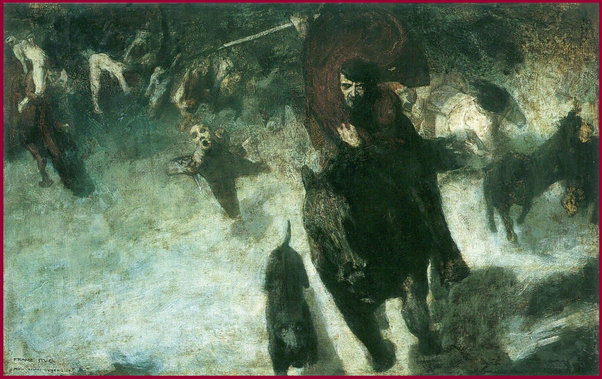 In 1889, Franz von Stuck depicted Wotan in a painting named "The Wild Chase." The image of Wotan resembles that of the man later known as Adolf Hitler who came to power in 1933.

# Hitler was a huge fan of Stuck’s work, and was fascinated with his paintings even from childhood. The young Hitler first glimpsed this painting aged 13 and would later have it displayed in his own gallery.

It has been said that Hitler copied his hair, mustache and even his oratorical style from the painting. # Did this gloomy painting predict the rise of Adolf Hitler?

Yair Davidiy's answer to What nation came out of Esau?

Yair Davidiy's answer to What two nations were Jacob and Esau?

Yair Davidiy's answer to Who are the Edomites/descendants of Esau? And where are they today?