Adapted from:
In light of the Torah, how did the Nazis rise against the Jews?
https://www.quora.com/In-light-of-the-Torah-how-did-the-Nazis-rise-against-the-Jews/answer/Yair-Davidiy

The Query that triggered this essay was,

"In light of the Torah, how did the Nazis rise against the Jews?"

The Divine Order according to Scripture is that the Jews keep the Torah and the Gentiles Nations respect, help, and allow themselves to be helped by them. The Nazis by rejecting this and attempting to do the the opposite were rising up against what should have been.

In the Holocaust more than 6 million Jews were massacred and millions more uprooted, physically harmed, impoverished, and fleeing for their life. The perpetrators originated in Germany but were assisted by many others. The Jews in Germany had been known for assimilation and for identifying with the German Nation. Even so, most German Jews managed to flee or somehow survive though many died including relations of mine in Germany and France.

The Jews in Europe at that time were Secular or undergoing a process of Secularization. Nevertheless, Religious and Hareidi Jews in Eastern Europe relatively speaking probably suffered more than others. Many questions may always remain open ones.

Nevertheless, the answers are there, at least in part.

The Query at the head of this article referred to the Torah. This term is often applied only to the Pentateuch, i.e. the Books written by Moses, meaning the First Five Books of the Bible. We however are going to use the term "Torah" as applying to the whole of Bible and related studies as a whole.

We will limit our answer to three aspects of the study.

(2). The description of the fate of Jews in Exile given in Isaiah 53.

(3). The Name "NAZI," the Bible, and Zionism. The meaning of the word "Nazi" (נאצי) in the Hebrew tongue as used in the Hebrew Bible.

Deuteronomy 28 starts out by promising great blessing if the nation of Israel travels the right path.

Deuteronomy (NASB) 28:49 “The LORD will bring a nation against you from far away, from the end of the earth, as the eagle swoops down; a nation whose language you will not understand.

This happened when the Romans destroyed the Temple and Kingdom of Judah. The Romans used an eagle as a symbol, so did the Nazis. The Roman and Nazi eagles were almost the same. The Nazis consciously imitated Roman models. 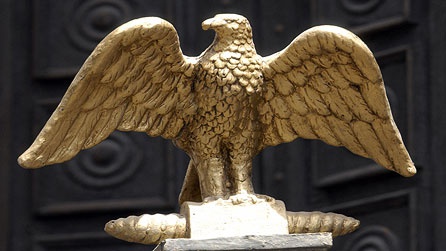 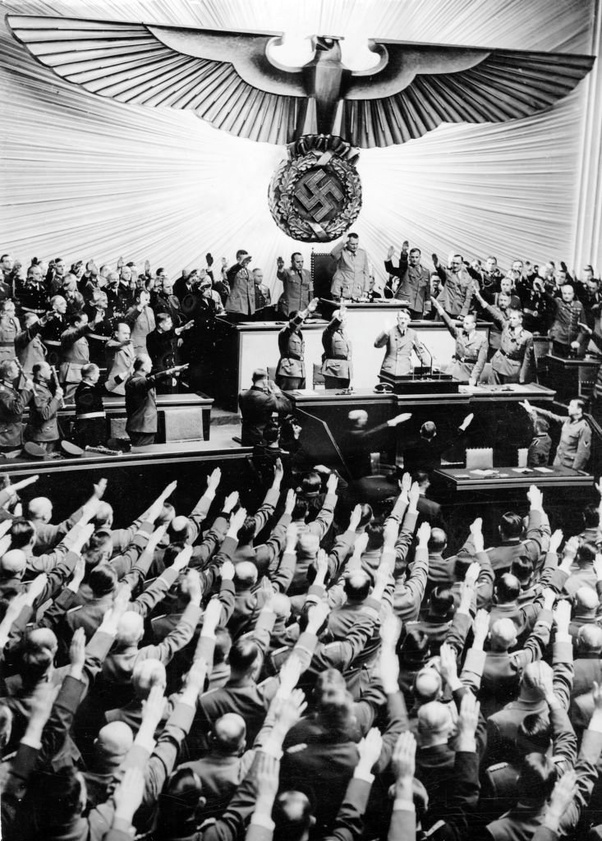 [Incidentally the Romans also sent captive Jews in ships to Egypt to be sold as slaves as prophesied in Deuteronomy 28:68].

In Deuteronomy 30 the Israelites, i.e. Judah, are warned that if in their places of Exile they still do not return to the Almighty then further disasters will come upon them.

Deuteronomy 32 repeats the promise of forgiveness and blessing if the Israelites in Exile repent BUT it repeats the warnings if such is not done.

The Germans and their followers presented themselves as a master race. They even came to believe it and so did others. The objective reality however suggest something much less than this. It may be that they, or at least their leaders, were even “not a people” but a foolish nation.

Deuteronomy 32 predicts that a situation will arise where the very continued existence of the Jewish People may have been in question.

Deuteronomy (NASB) 32:
26 I would have said, ‘I will wipe them out,
I will remove the mention of their name from humanity,’
27 Had I not feared the provocation by the enemy,
That their adversaries would misjudge,
That they would say, ‘Our hand is triumphant,
And the LORD has not performed all this.’

Isaiah chapter 53 describes a figure who suffers. There are those who understand this to stand for some special holy man, or even to the Messiah. The simplest solution however is that which sees the passage as representing the Jews during their Time of Exile. This would include the Holocaust. The person or people spoken of is not considered a handsome one. He was despised and abandoned (53: 2,3). He suffered pain and sickness and was not respected by others.

It was however the afflictions of others that he bore (53:4-5). It was other people who projected onto him their own failings and impairments. They attributed to him their own sins (53:5). This reminds us of the propaganda campaign conducted by the Nazis against the Jews. This was a prelude to extermination. It received a certain degree of acceptance throughout much of the world. They claimed the Jews were a sick, genetically deprived people, who commit perversions and crime and prey on others. In reality it was the Nazis and their fellow-travelers who were the criminal perverts.

Isaiah (NASB) 53:
5 But He was pierced for our offenses,
He was crushed for our wrongdoings;
The punishment for our well-being was laid upon Him,
And by His wounds we are healed.

He suffered and was killed for the sins of others. He did not resist but went like a sheep to the slaughter (53:7-8). This is what happened to the Jews. He was killed alongside public offenders (53:9). To be a Jews was considered a crime! Nevertheless this was a Divine Decree. Its reason is not entirely clear to us.

This too is a description given elsewhere in Scripture for the Jews:

Psalms (NKJV) 44:
22 Yet for Your sake we are killed all day long;
We are accounted as sheep for the slaughter.

Isaiah (NKJV) 42:
22 But this is a people robbed and plundered;
All of them are snared in holes,
And they are hidden in prison houses;
They are for prey, and no one delivers;
For plunder, and no one says, 'Restore!'….

24 Who gave Jacob for plunder, and Israel to the robbers?

Zechariah (NKJV) 8:
13 And it shall come to pass
That just as you were a curse among the nations…

In the End Times the Jew will be saved. He will be rewarded for despite everything basically keeping the Faith (53:10).

Isaiah (NASB) 53:
10 But the LORD desired
To crush Him, causing Him grief;
If He renders Himself as a guilt offering,
He will see His offspring,
He will prolong His days,
And the good pleasure of the LORD will prosper in His hand.

Isaiah (NKJV) 49:
26 I will feed those who oppress you with their own flesh,
And they shall be drunk with their own blood as with sweet wine.
All flesh shall know
That I, the LORD, am your Savior,
And your Redeemer, the Mighty One of Jacob.

The Transgressors who carried out the Holocaust called them selves "Nazis." They identified with the ideology and practices associated with the Nazi Party, or in its full name the "Nationalsozialistische Deutsche Arbeiterpartei," i.e. the National Socialist German Workers' Party.

In Hebrew and Yiddish writings the name “Nazi” is written as "Natsi" (נאצי).

This is similar to a Hebrew word from the word-root "NATs" [נאץ]. It connotes "anger, insult, humiliate, blaspheme."

It may be a cognate of the English word "Nasty." Iמ English "Nasty" means "highly unpleasant," disagreeable, disgusting, distasteful, awful.

In the Hebrew Bible we find this word and its extensions, according to the Concordance of Iben Shushan, about 29 times. Mostly it is used in the sense of “despise, reject, humiliate.” For example, "a day of distress, rebuke, and humiliation" [Hebrew: "Natsah"], Isaiah 37:3; "my heart disdainfully rejected [Hebrew: "Nats"] rebuke!" Proverbs 5:12, "those who despise me” [Hebrew: "le-meNatsi"] , Jeremiah 23:17.

We also find a cognate of the expression “NATs” concerning the Spies who brought back a bad report about the Land:

Numbers (NASB) 14:
11 And the LORD said to Moses, ‘How long will this people be disrespectful [Hebrew: "YiNatsuni"] to Me? And how long will they not believe in Me, despite all the signs that I have performed in their midst?’

Here we have the Hebrew word "YiNatsuni" [ינאצוני] (translated as "disrespectful") derived from the word-root "NATs."

The quotes verse in its context concerns the Israelites who did not want to enter the Land of Canaan. The Hebrews had come out of Egypt, passed through the Wilderness, and reached the border areas of the Promised Land. They then sent 12 spies to check out the region and bring back a report. Ten of the emissaries when they returned brought a discouraging description. Consequently the people refused to keep going and conquer Canaan. God was angry with them. Punishment was decreed against them and a black mark placed over the Israelite Nations forever.

The verbal form used here (Numbers 14:11) is "YiNatsuni." This is translated as "be disrespectful" according to the context. It could also however in the light of Modern Hebrew usage be rendered as "They caused the Nazis to come!"

One of the reasons for the Holocaust, as suggested by Rabbinical Thinkers of the National Religious camp, was in order to completely disengage the Jews from their non-Jewish surroundings and bring them to Israel.

When the Holocaust came about the British ruled over Palestine. There was a Jewish community of about 300,000 Jews. Prior to that, Nazi agents and agitation had helped foment the 1936–1939 Arab revolt in Palestine. The British rulers successfully suppressed it but faced with the threat of an approaching world war they wished to pacify and reconcile the Muslim World. Consequently the White Paper of 1939 limited Jewish immigration to the Land.

In Hindsight however one may say that the Ultra-Orthodox Jews, i.e. Hareidim, should perhaps have taken action. They should have refused to accepted the Secular anti-Jewish Zionist hegemony in Palestine. They may have been able to importune or pressure the British to change their mind, and so on. They may then have been able to bring more Hareidi and Observant Jews to the area and thus help save more Jews altogether. We do not know. This is speculation.

At all events after World War-2 another 300,000 Jewish refugees from Europe were brought over. The War of Independence was fought (1948). The State was established. More Jews came in, fleeing from Muslim countries. The Secular Zionists were in control. They caused many Jews to be less religiously observant than they previously had been. The State of Israel is still suffering from the negative effects of these actions.

We may say that according to the Bible the Jews had not been acting as they should have been. In the past, they had not done what they needed to do in the past. Divine Providence had reasons of its own. These may have necessitated an active rejection by the Gentiles of Jewish Presence. This was what the Nazis brought about. A closer study of the sources may yet show a more exact correspondence between what was indicated to happen and what did indeed take place.