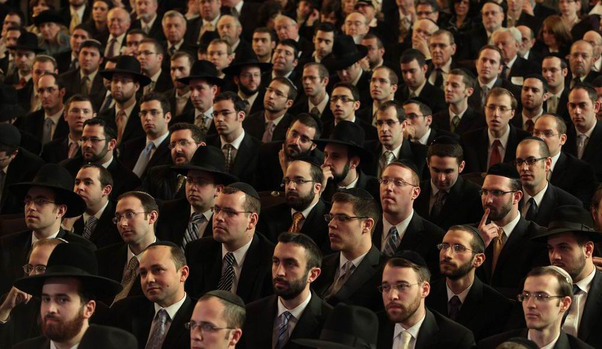 Are the majority of Jews traced back to Europeans who converted to Judaism or people who came from Israel?

DNA findings indicate that at least 50% of the present-day Jews can trace themselves back to the Middle East. This 50% does not mean half the Jews but rather that all known Jews have some such ancestry in some cases it being mostly from one area and in others less. DNA is only an indication. European type peoples were also to be found in Ancient Israel and its surroundings. The West European R1b Y(male-transmitted) genogroup was also known from Ancient Egypt and Canaan, admittedly as a minority phenomenon but it was there. Today only about 12% of Sephardic Jews are R1b whereas very few of the East European Jews are. On the other hand the Jews of Eastern Europe had about 30% of R1a which is common at much higher rates among East Europeans. This is not surprising when it is realized that DNA is in part an outcome of environment and the Jews of Europe had spent a good many centuries in European surroundings.

The Jews throughout their history accepted converts and over the centuries this accretion would have accumulated. So from Secular sources we may assume that much Jewish ancestry is traceable to Jewish forebears whereas some may not be. It does not matter. The Jewish People had been with the Christian and Muslim Nations since before most of the Gentile masses could read and write. When the Gentiles decided to kill Jews for allegedly crucifying one of their own no-one really bothered whether their ancestors could be traced back to the Middle East or not. The Jews were always visible and always being found fault with. Their ancestry was not a consideration. Nevertheless it seems that to a substantial degree their physical heritage was indeed that of Judah of old.

The Bible is what determines who is who! The Jews were who they are because the Jews believed in the Torah, i.e. the Bible. The Bible says (see below) they are Jews. The Bible also allows they who believe to become Jewish. The Bible defines who a Jew is. Someone who does not like Jews being born that way, or choosing be become so, should take their complaint to the Author of the Bible who decided what and how a Jew should become.

The Bible says that the present-day Jews are Judah!

If ANYONE FINDS THIS DIFFICULT TO ACCEPT THEN THAT IS THEIR PROBLEM!

In Scripture one finds numerous proofs and indication proving that the Jews are Judah. These proofs in some cases are straightforward and in others require A LITTLE INITIAL EXPLAINING. Not everybody is open to be immediately convinced or even to even comprehend what the argument is saying. In this age of instant Media Delivery, Reading Comprehension is not always a strong point for many amongst us. We therefore chose the most simple direct points of evidence derived directly from the Bible.

Hosea 11:
12 Ephraim compasses me about with lies, and the House of Israel with deceit: but JUDAH yet rules with God, and is faithful with the Holy Ones.

This is what the Jews have always done. They learn Torah, keep the commandments, and develop Biblical Exegesis according to principles embedded in Biblical Text.

Genesis 49:
10 The scepter shall not depart from Judah,
Nor the ruler's staff from between his feet,
Until Shiloh comes,
And to him shall be the obedience of the peoples.

Genesis 49:
10 The scepter [Hebrew: "shevet" meaning both "staff" as well as "Tribe" i.e. His descendants shall be recognized as the Tribe of Judah]
shall not depart from Judah,
Nor a Lawmaker from between his feet [i.e. from his descendants] for ever [Hebrew: "ad"]
Shiloh will come,
And to him shall be the obedience of the peoples.

The Jews have always been recognizable as Jewish i.e. as coming from Judah. There is no-one else. The Bible says the Jew will continue to exist, will be scattered and persecuted for being what they are but will remain who they are until their Redemption. The Bible says they will always learn the Law and understand how to promulgate it. They are the Lawmaker (Psalms 60:9). This is what they are. This is what has happened. There are no other candidates for being Judah neither could there ever be.

Zechariah 1:
15 But I am very angry with the nations who are at ease; for while I was only a little angry, they furthered the disaster.

In the verse above, the expression "they furthered the disaster" should be rendered as "they helped deleteriously" i.e. they [the Gentiles] did more negatively than they should have against Judah.

Zechariah 8:
13 It will come about that just as you were a curse among the nations, O house of Judah and house of Israel, so I will save you that you may become a blessing. Do not fear; let your hands be strong.

The above verse (Zechariah 8:13) says that the House of Judah and those of the other Tribes attached to Judah will have been considered a curse among the Gentiles.

The Jews were exiled and scattered as it was prophesied that they would be. The Jews have been periodically persecuted for being what they are, just as it was foretold would happen to them.
It did not happen to anyone else. They are the ones who fit the bill!

4. The Jews will have kept the four fasts lamenting Destruction of the Temple (Zechariah 8:19).

[These four fast are the four fastdays the Jews still keep to mourn the destruction of the First and Second Temples:

The four months mentioned fit the months of the Hebrew Calendar. On each of the designated months there is a Fast-Day associated with Destruction of the Temple and Exile of the Jewish People. These are the only Fast Days (recognized throughout the Jewish Diaspora) in the Jewish Calendar apart from the Fast of Esther just before Purim and Yom Kippur which is a different case. The Jews still keep these fasts. The Bible says the Jews would keep these fasts. No-one else keeps them. Has the Bible made a mistake? Confused the Jews with somebody else.
The Jews are the only ones who keep the Four fasts in the numbered months. Therefore the Jews are the Jews of Judah mentioned in the Bible.

5. In the End Times not only the other Tribes of Israel but also the non-Israelite Gentiles will Acknowledge Judah (Isaiah 60:14).

Isaiah 60:
14 The sons of those who afflicted you will come bowing to you,
And all those who despised you will bow themselves at the soles of your feet;
And they will call you the city of the LORD,
The Zion of the Holy One of Israel.

We may be nearing the End Times. The establishment of the State of Israel may presage the beginning of Redemption. At all events Redemption will come. The Jews are the ones it was prophesied about and they are the ones fulfilling it, or they will be in the future.

For more articles on the subject of identifying the Jews with Judah of the Bible see:

25 Jewish Identifiers . Proofs that the Jews of Today are Judah of the Bible

23 Identifiers - Hebrew Nations. Expanded Version. Proofs that the Jews of Today are Judah of the Bible