Do you know about the Dolmens of Finland. There are huge rocks standing on three smaller rocks. There are so many that It cannot be caused by Iceage, If there ever was one. These are not studied, because the general science don't accept them as manmade but only natural. But why Is it that allways there is only three rocks under the huge rock; one reddish, one whitish and one grey one. It cannot be coincidence. This much have been learned, that they stood on the ancient shores, before land was risen and made Finland as It is today united with the Eurasian Continent. It used to be part of Scandinavian Island. On the Otherhand, there was Doggerland, which went under to the Sea. Someplace land lowered like in the Coast of Britains and someplace as in Finland, It rose.


There is a forum that is unfortunately in Finnish, that discuss about these giants. These rocks are called as Jalkakivet - Footstones or Feetstones as they seem to have three legs. Now, Finland is very rocky ground. There is not much soil on the ground, only in the Western Finland. Everywhere else the baserock comes depending on the location 5 cm to 2 meters. If you cannot follow conversation, please look at the pictures. Some of the rocks are of other purpose, but some clearly three legged stones. Maybe these three legged "Dolmens" are early versions of the samekind or ladder versions, I don't know. Maybe here the weather was so harsh and cold, that they only could do this much. So maybe these served also burial monuments and people were buried next to them. We don't know, because the ground in Finland is so sour, that It doesn't preserve any kind of animal bodies. It maybe that in only 10 years or maybe less, the body is totally vanished. In the best cases they have lasted 1000 years, but that must have been a good place.


People think of them as religion purposes, of course what else ? Or that they are some kind of fireplaces because on the shore there must have been wind and in the shed of the rock the fire lasts longer. I am not shure what Is the case, but that I am shure that these rocks cannot be natural. People used natural rocks of course, but they settled them to serve a purpose. Maybe here in Finland there was not so many people, that they only could do this or they forgot the original model or crafstmenship or that they only continued to do as done before and forget why these even were made.


I can not collect the pictures, since they have copyrights, but you can go watch yourselves. If you understand the text, just do not mind It. There is so little understanding of these, because people just have been found them as ancient new phenomenom. I think, we have found dolmens of Issachar. Since these are not precise the looking same as dolmens usually are, there is a question, who and when. These are like poor copy. Why, I don't know. Or these maybe the first models and maybe later they learned to do better dolmens... Which way earlier or later, that is the only question. But I am sure the these are dolmens. What else could they be ? 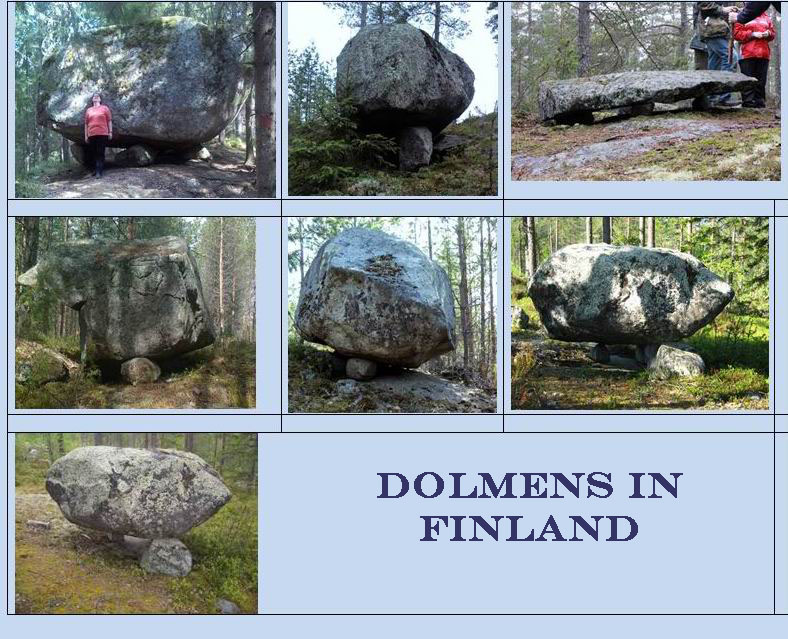 Must be at least dozens or even hundreds in the woods and forests lying and nobody knows how many has been destroyed to take building roads, houses or just clean area for farming or something.


I think this is a matter of investigation. Atleast not something that can easily be bypass.