Contents:
1. The Tudor Rose of England and the Rose of Israel
2. Roses and Poppies
3. The Poem "In Flanders Fields" by Lieuteneant-Colonel John McCrae
4. Moina Michael, the Silk Poppies and "We Shall Keep the Faith."
5. The Poppy Becomes the National Flower of the State of Israel and of Belgium
===============

1. The Tudor Rose of Enfgland and the Rose of Israel

In our article Tudor Rose. The Tudor Rose Symbol of ALL Israel! we discuss the Rose symbol of all Israel. The opening passage of the Zohar says that the Nation of Israel is represented by a rose with 13 petals.

We pointed out that one of the official symbols of England is the Tudor Rose which has ten petals, five white ones on the inside surrounded by 5 red ones around it. It also has five green leaves on its outside. This resembles the Rose of Israel as described by the Zohar. The discrepancy in numbers, between 13 as compared to 10, is explainable by the Rose in the Zohar representing all of Israel while that of England of only 10 Tribes. When Ephraim and Manasseh are considered full Tribes (instead of both together counted as "Joseph") and Levi is also inlcuded then there 13 Tribes. "Brit-Am, Movement of the Ten Tribes" has adopted a variation of the Tudor Rose as its own symbol since the publication of "Ephraim" in 1995 if not before then.

The flower in question is definitedly a rose. This is the meaning of the word in Hebrew, "vered," used by the Zohar and what the Tudor Rose was consdiered to be. Nevertheless, in popular representations the Tudor Rose often looks something like a poppy. An artificial version of the poppy is worn on Armistice Day in Britain and the Commonwealth to remember they who died in the Wars against the enemy.

3. The Poem "In Flanders Fields" by Lieuteneant-Colonel John McCrae

Take up our quarrel with the foe:
To you from failing hands we throw
The torch; be yours to hold it high.
If ye break faith with us who die
We shall not sleep, though poppies grow
In Flanders fields.

4. Moina Michael, the Silk Poppies and "We Shall Keep the Faith." 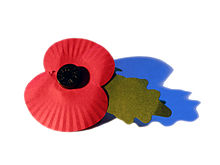 Inspired by "In Flanders Fields", American professor Moina Michael resolved at the war's conclusion in 1918 to wear a red poppy year-round to honour the soldiers who had died in the war. She also wrote a poem in response called "We Shall Keep the Faith". She distributed silk poppies to her peers and campaigned to have them adopted as an official symbol of remembrance by the American Legion. Madame E. Guerin attended the 1920 convention where the Legion supported Michael's proposal and was inspired to sell poppies in her native France to raise money for the war's orphans. In 1921, Guerin sent poppy sellers to London ahead of Armistice Day, attracting the attention of Field Marshal Douglas Haig. A co-founder of The Royal British Legion, Haig supported and encouraged the sale. The practice quickly spread throughout the British Empire. The wearing of poppies in the days leading up to Remembrance Day remains popular in many areas of the Commonwealth of Nations, particularly Great Britain, Canada and South Africa and in the days leading up to ANZAC Day in Australia and New Zealand.

The wearing of poppies by British sports teams and the like has led to it acquiring an unofficial national significance, see Remembrance Poppie.

Extract from "We shall Keep the Faith," by Moina Michael, 1918

We cherish, too, the poppy red
That grows on fields where valor led;
It seems to signal to the skies
That blood of heroes never dies,
But lends a lustre to the red
Of the flower that blooms above the dead
In Flanders Fields.

And now the Torch and Poppy Red
We wear in honor of our dead.
Fear not that ye have died for naught;
We'll teach the lesson that ye wrought
In Flanders Fields.

5. The Poppy Becomes the National Flower of the State of Israel and of Belgium

In 2013 by popular vote citizens of the State of Israel decided to make the poppy their national flower.

Following the completion of an online election campaign held by the Society for the Protection of Nature, the flower was chosen.

The bright red calaniot (anemones) that cover the country's southern fields each spring have now become Israel's national flower, following the completion of an online election campaign held by the Society for the Protection of Nature (SPNI) and Ynet.
Achieving 28 percent of the vote, the calanit won first place ahead of the rakefet (cyclamen) and the purple iris, which scored 23% and 12% of the votes in second and third place.

A variant of the Red Poppy is also the National Flower of Belgium. Like the British and others, a portion of the inhabitants of Belgium are also descended from the Lost Ten Tribes of Israel.

Bright and valiant, the magnificent beauty of poppies is something to behold. But this bloom does more than light up any countryside. It also serves as an important symbol to the veterans lost in the World War I and is used in honoring those that have been lost. In the Memorial Day parade, people are handed a red poppy made from crepe paper showing consolation to the dead.

This tradition dates back to 1915, when the entire European villages were shattered in battle. After a long and gloomy winter, red poppies began to appear across the battlefields. This event led to the acceptance of red poppies as important national symbol. The Tudor Rose is one of the official symbols of England and the British Monarchy. The United States Congress in 1986 chose the rose as the national flower of the USA.