What if all reform and conservative Jews turn into ultra-orthodox Jews? What consequences would this have?
https://www.quora.com/What-if-all-reform-and-conservative-Jews-turn-into-ultra-orthodox-Jews-What-consequences-would-this-have/answer/Yair-Davidiy 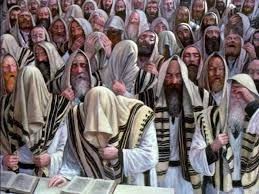 Source of picture: The Ancient Hebrews

Reform and Conservative Jews who are still legally Jewish are not so much the problem. It is just as much the Secular Jews we need to hope would become more religious in the Ultra-Orthodox or National Religious-Orthodox (nicknamed "Haredalim" in Israel) manner.
What consequences would this have?
There would be more Jews since the UOJs (Ultra-Orthodox Jews i.e. hareidim) have more children. The children would be healthier, happier, and better educated. Some may be surprised by this but such is the reality. UOJs in general live longer. They have less sickness. More of their children learn to read at an early age and understand what they are reading. They have more general knowledge as well as a deeper appreciation of Jewish sources. They have less psychological problems. In objective terms the intellectual level of UOJs is much higher despite less of them going on to university. Or maybe because of it? Their IQs and ability to learn are much greater as testified to by tests conducted by the IDF. Today the Israeli government invests five times more in each secular child than it does in hareidi ones. And still the UOJ infants manage to do much better!
There would be less crime.
Women would have a much higher self-image of themselves!! Again many will be surprised at this but such is the case.
People who work would be more gainfully employed with less crime, less exploitative work, less superfluous effort. There would probably be less bureaucracy, less corruption, and less oppression of the poor. Secular society today is a bluff, based on money, power, brow-beating, exploitation, and deception. The ordinary person is turned into a zombie by the exigencies of work, TV, social pressures, debt, and Media brain washing. There would be less of that. Life in Israel would be simpler, and better for everybody with respect for parents, family harmony, and people respecting and assisting each other. In general there would be more efficiency. Anyone who doubts all this are invited to compare how hareidi cities, such as Beitar Ilit, are run and the results achieved per shekel invested as compared to their secular counterparts.
And so on.

There are those who used this query to attack the hareidi community.
It was said that less Orthodox Jews now work and that they live at the expense of others. In reply we say that if Hareidi men were not discriminated against by Israeli government bureaucracy then more of them would work and the work would get done more often and more well. It is actually the Hareidim who are subsidizing the secular by having to pay for an IDF which is top heavy and designed for social engineering more than fighting. The same applies throughout Israeli society. Through indirect taxation the religious give the government money to pay their secular servants high wages which they spend overseas holidaying in Turkey and the such! Actually, Society would be better off if certain secular people who do work stopped doing so.

If everyone was religious there would be more equality of opportunity. There would also be more people learning Torah. This enhances the spiritual, moral, and intellectual level of the Jewish people. This is the secret weapon of the Jews. Without this there is nothing left.