Do Israelis feel ashamed that former Israeli prime ministers were leaders of the terrorist groups Irgun and Lehi?
http://hebrewnations.com/articles/quora/palestine/lehi.html
https://www.quora.com/Do-Israelis-feel-ashamed-that-former-Israeli-prime-ministers-were-leaders-of-the-terrorist-groups-Irgun-and-Lehi/answer/Yair-Davidiy 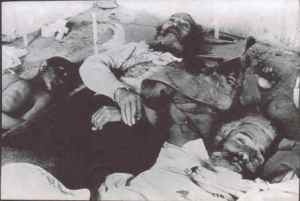 Source of Picture: Jews fair game for murder since 1920

The picture shows Jewish victims of an Arab Massacre (Nebi Musa) of Jews in Palestine in 1920. This is the background, along with the Holocaust that followed, upon which the subject should be considered.

The British abandoned the Mandate over Palestine in 1948 due to opposition by Jewish and Arab forces. Most Jews in the country at that time wished the British to stay. The Jewish Underground Movements, Irgun and Lehi, had been against them.

Do Israelis feel ashamed that former Israeli prime ministers were leaders of the terrorist groups Irgun and Lehi?

The British in Palestine were not as bad or as good as they should have been nor as bad as they are sometimes portrayed. This is a complicated subject and should merit an exhaustive study. Here are a few points:

Where I used to live in Rehaviah, Jerusalem, there is a memorial plaque to a 16 year old Jewish boy, Alexander Rubowitz. He had been tortured and murdered by British detectives in May, 1947. His alleged crime was posting Underground posters on walls.

There were also terrorist attacks against Jews carried out by British soldiers.
An example is the attack on Ben Yehudah street:

Ben Yehuda Street bombings
https://en.wikipedia.org/wiki/Ben_Yehuda_Street_bombings
On February 22, 1948, three British Army trucks led by an armoured car driven by Arab irregulars and British deserters exploded on Ben Yehuda Street killing from 49 to 58 civilians[1][2] and injuring from 140 to 200.[3][4][5][6] The bomb had been created by Fawzi al-Qutb. .... Two British deserters, Eddie Brown, a police captain who claimed that the Irgun had killed his brother, and Peter Madison, an army corporal, had been persuaded to join the attack, also by the promise of substantial financial rewards.[7].... Lehi also reacted several days later by blowing up a train full of British soldiers as it drew out of Rehovot station, killing 27.[3]

Some of the British personnel in Palestine had been against Jews and some had not. Most were not but they who were did harm. The Underground movements, known as Irgun and Lehi, fulfilled historical roles in their own right. Despite the above, my personal impression is that on the whole the British helped the Jews much more than they hindered them. Some of the crimes the British are occasionally accused of were not necessarily their fault.

The Hebron massacre refers to the killing of sixty-seven or sixty-nine Jews on 24 August 1929 in Hebron, then part of Mandatory Palestine, by Arabs incited to violence by rumors that Jews were planning to seize control of the Temple Mount in Jerusalem.[1] The event also left scores seriously wounded or maimed. Jewish homes were pillaged and synagogues were ransacked. Some of the 435 Jews who survived were hidden by local Arab families,[2] although the extent of this phenomenon is debated.[3] Soon after, all Hebron's Jews were evacuated by the British authorities.[4] Many returned in 1931, but almost all were evacuated at the outbreak of the 1936-39 Arab revolt in Palestine. The massacre formed part of the 1929 Palestine riots, in which a total of 133 Jews and 110 Arabs were killed, and brought the centuries-old Jewish presence in Hebron to an end.

It was claimed that the British police had not provided sufficient protection in 1929. Out of the policemen present only one was British, one was Jewish, and the rest were Arab. Some of the Arab police protected Jews and killed Arab rioters whereas other policemen joined the attackers. The Jews of Hebron were anti-Zionist and had refused protection, by the Hagana, believing they would not be attacked. See Wikipedia.

Patria disaster
https://en.wikipedia.org/wiki/Patria_disaster
From Wikipedia, the free encyclopedia
The Patria disaster was the sinking on 25 November 1940 by the Jewish paramilitary organization Haganah of a French-built ocean liner, the 11,885-ton SS Patria, in the port of Haifa, killing 267 people and injuring 172.[1]

The semi-official Jewish militia known as the Hagana had miscalculated. They had not intended to sink the ship but rather to cripple it and prevent the British from towing it away. The plan went wrong.

The Struma.
This was a ship carrying nearly 800 Jewish refugees that was sunk in the Black Sea by a Russian submarine on 24 February 1942. Previous to the sinking the British had refused permission for the refugees to disembark in Palestine. Later they relented and were prepared to accept the children but this came too late.
See:
Struma disaster
From Wikipedia, the free encyclopedia
https://en.wikipedia.org/wiki/Struma_disaster

The British were not entirely responsible for the Struma disaster but Underground propaganda at the time blamed them for it. The Russian role in sinking the ship was only made public much later.

We could go on and on. Each and every case can be examined and argued about.
We repeat, the British were sometimes impartial, sometimes against the Jews, and at other times for them. During World War-2 Britain and its dominions had taken in ca. 40,000 Jewish refugees, facilitated the transfer to the USA of another 40,000, and allowed a further number of the same degree i.e. ca. 40,000 to take refuge in Palestine or in Cyprus. Those in Cyprus were later moved to Palestine.
Maybe they could have done more but they still did a lot.

The British had also helped the Jews develop Palestine and prepared it for what was to follow:

cf. The following extracts are from Tom SEGEV:

# The British kept their promises to the Zionists. They opened up the country to mass Jewish immigration; by 1948, the Jewish population had increased by more than tenfold. The Jews were permitted to purchase land, develop agriculture, and establish industries and banks. The British allowed them to set up hundreds of new settlements, including several towns. They created a school system and an army; they had a political leadership and elected institutions; and with the help of all these they in the end defeated the Arabs, all under British sponsorship, all in the wake of that promise of 1917. Contrary to the widely held belief of Britain's pro-Arabism, British actions considerably favored the Zionist enterprise. #
Tom Segev, "One Palestine Complete", USA, 2001, p.5.

# Pollock [a British military administrator in Palestine] and others like him wanted the state administration to continue to function properly, and so they did in fact make a great effort to transfer it to the Jews. Some functions were handed over to the municipalities, others to the Jewish Agency. In addition, the evacuation plan, from south to north, left responsibility for Jewish population centers in British hands, almost to the very last minute, thus impeding Arab war plans. # Segev, ibid., p.513.

At the beginning of the World War-2 restriction on Jewish immigration to Palestine had been in place. At first British forces intercepted ships carrying Jewish refugees from the Balkans, etc, trying to reach Palestine. When Churchill heard of this he ordered it stopped and the boats be allowed through. Winston Churchill was then First Lord of the Admiralty before becoming Prime Minister in May 1940. After the War there was an attempt by the British to curtail Jewish immigration. This resulted in confrontations, tragedies, and animosity. Nevertheless, from an overall view British rule had been positive, cf.

Immigration to Israel: Aliyah Bet
(1939 - 1948)
http://www.jewishvirtuallibrary.org/aliyah-bet-1939-1948 In total, it is estimated that between 1939 and 1948 approximately 110,000 Jewish immigrants had participated in Aliyah Bet by sailing to the territory of the British Mandate. The number of immigrants during the entire mandate period, legal and illegal alike, was approximately 480,000, close to 90% of them from Europe. The population of the Yishuv expanded to 650,000 by the time statehood was proclaimed.