How did Abdul Nabi (shot in the back, running away from the Israeli wall) pose a threat to Israel?
https://www.quora.com/How-did-Abdul-Nabi-shot-in-the-back-running-away-from-the-Israeli-wall-pose-a-threat-to-Israel/answer/Yair-Davidiy 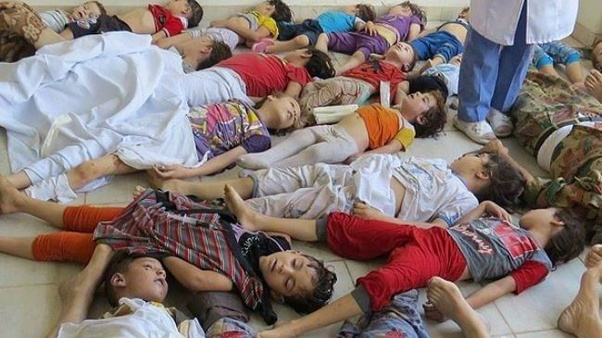 Source of picture: An out-cry against the madness going on in Syria! http://rovinginformant.blogspot....

The image shows victims of chemical warfare in Syria. These people are also Sunni Arabs just like the people in Gaza. They difference is that the victims in Syria were killed by other Syrians. Why is the media not occupying itself with them?

The question was: How did Abdul Nabi (shot in the back, running away from the Israeli wall) pose a threat to Israel?

Soldiers at war often get shot in the back. It may not be a gentlemanly thing to do but that is what is done. In this case, assuming that is what happened which may not be so, it was an exception. Considering the circumstance it testifies to Israeli restraint (and/or foolhardy chivalry) that only one such case has occurred so far.
You may protest that this is not war but rather a peaceful demonstration. Peaceful demonstrators do not come to demonstrate armed with Molotov cocktails and live ammunition. The Palestinians have come to the scene with the intention of causing harm to Israel. Their government has the expressly declared aim of wishing to exterminate all the Jews not only in Palestine but everywhere else. Their leader at the scene of the demonstration just before it began threatened that the Palestinians would eat the liver of Israeli citizens. They want as many Palestinians (i.e. their own people) dead as possible. It is more impressive in the media. That is also one more reason why the Israeli soldiers defending their nation try to wound and not kill. Most of the few moralities have involved wanted terrorists identified by biometric film identification. Meanwhile Turkey and Syria are massacring thousands of civilians, men, women, and children, in the north. And nobody says anything. Why is that? There is no real difference between the Arabs being killed by Asad in Syria and the Palestinians in Gaza. If anything those in Syria may even be a little more refined. Why then is the Media not concerned with them?
We all know the answer.
The Palestinians are opposing Jews. Defending the Palestinians at the expense of the Jews allows Jew-haters to express their antipathy in what is depicted as a worthy cause though such it is not.