In Defence of Modesty

Note:  The article below was written by Yair Davidiy for Quora in response to a question posted on Quora.
It concerned the wearing of the "Frumka" burka-type garment by a handful of Ultra-Orthodox women.

This is the notice I received: 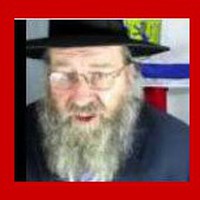 In Defense of the Jewish "Frumka" Women! 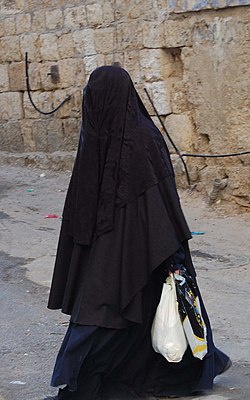 Freedom of travel and movement!

The question concerns a kind of Jewish version of the Burka which is the cloak-like garment worn by extreme Islamic groups. The Jewish version is also called “Frumka,” a play on the words “Frum” (Yiddish: "devout") and "Burqa." It covers the whole body from head to foot leaving only a place to see out from. The Islamic prototype has been made famous by the Iranian Muslims and the Taliban in Afghanistan. An American woman who converted to Islam in Persia once remarked that wearing the burka actually allowed freedom of travel and movement. In Teheran there are numerous young unmarried and unemployed young men. The burka averted the attention of these young bucks who otherwise can be troublesome.

In Israel there are a small group of females who recently have begun wearing a similar type of garment. They have been nicknamed "Taliban Women." Some of them are to be seen in the Ultra-Orthodox neighborhood of Mea Shearim and its surroundings in Jerusalem. I sometimes go there or pass through it and stop off to do some shopping. I see these ladies walking around. Many of them are very young, only little girls, copying their mothers. These ladies usually move around in pairs. I had to stand in line behind a few of them on occasion at the shopping center.

They are quite assured of themselves. They speak with confidence and intelligence. Even the young ones give the impression of being quite personable and mature for their years. They also seem rather pleased to be doing what they do.

They are not the ones who look miserable! 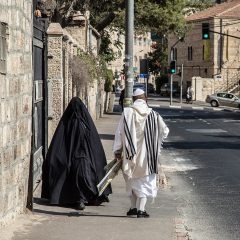 Ultra-Orthodox Women have the Highest Level of Self-Esteem!

A few decades back the Secular Israeli daily newspaper, "Yediot Acharonot," published the results of a sociological study. Female members of the Left-wing Secular Kibbutzim were found to have the lowest levels of Self-Regard from all other socio-economic groupings. The highest ranking pertained to women from the Ultra-Orthodox community!

Is "Womens Lib" all a failure?

I once had to see a lawyer. At the entrance sat a women behind a typewriter. She was showing a very generous cleavage. When she saw me with my Ultra-Orthodox garb she became flustered. I understood she was dressed in that way since her employer wanted it. Women apply make-up, wear expensive clothes, reveal parts of their body and/or emphasize them all for the sake of male approval. They also shake hands, touch, allow employers and co-workers to hug and caress. They are open to conversation with strangers and may even initiate them. On beaches they expose much of their bodies. Sometimes even in public thoroughfares they do the same.

This is the world we live in. We are part of it.

We even to a limited degree partake of it and benefit from it.

Nevertheless, who says it is all that good?

A certain way of life may not be suited to you but if others like it that way, see value in it, why begrudge them?

Do we all have to fit into little boxes and act in the same manner?

Who the hell are we to judge other people?

Who says the "Taliban Women" are all that mistaken?

Do our women have to be subjugated to the stares and attentions of every male who so wishes to look their way?

Do not be mistaken. What women endure and experience their men will afterwards have to pay for whether they know about it or not.

Most women in the Secular World have experienced Sexual Molestation or worse at least once in their lives if not quite often. In some quarters attempts to do the same are almost taken for granted and considered natural.

Is that what "Liberation" really means? Freedom to be degraded and exploited?

The Video Narrative. Is this really so bad?

I watched the video from a girl who "infiltrated" the Taliban Women and brought back impressions from them. A lot of it made sense to me.

A young married lady relates that she understands that by virtue of how she dresses her children will be virtuous and succeed. She believes it and wants it.

# Virtuous women by being kind, doing good deeds, and being modest can bring Redemption to the world.

Her father told her that her husband can tell her how to dress and act at home but in the street he cannot prevent her from dressing modestly, even if excessive.

# In contrast to Jewish men whose task it is to learn Torah the role of a woman is to dress modestly. That is why she came into the world. She knows of "Taliban Women" who are full of holiness, modesty, and peace. They reach high levels. She believes God will help her too to reach such a level. She has a Great Rectification to make. God will help her. This will bring a blessing on all her surroundings.

# Children who grow up that way are full of happiness and innocence. They are happy all the time. They like living that way. She walks quickly when obliged to go out on the street. She does not want men to look at her with strange eyes.

Perhaps we need such a Counter-Balance?

The girl providing the Narrative for the Video says she feels sorry for girls who grow up in such an environment. She says they will never know there is another world, with trips, sea, trains, friends, beautiful clothes, etc. They are imprisoned in a world chosen for them.

As far as I see it the people who have all these other things for their part will probably never know that an inner world also exists.

Everything comes with a price.

When all the world goes one way to an unnatural degree maybe we need a few others to pull in the opposite direction?

Warning: Despite my sympathetic view point posted above it is worth noting that some Rabbis from the Jewish Ultra-Orthodox Community have severely condemned the practice of Jewish women wearing the “frumka.” Nevertheless, my observation is still pertinent: In the same way as some find it legitimate to criticism the zeal of the Taliban Women then even more, much more so, may we protest in the opposite direction. The immodest dress and behavior of present-day Jewish women is a national disaster and liable (G-d forbid) to bring harm on everyone! The Frumka Women in their own way are DOING SOMETHING ABOUT IT!

At all events I posted the following "Appeal" (i.e. protest) below to Quora:

I do not see why protesting against female nudity in public places should be considered any more offensive than practicing it. Apparently because of this article I have been banned for two weeks by Quora Moderation. To my mind this is bigotry against religious sensibilities. Please explain what was wrong with what I wrote. Perhaps I am missing something?

Here is the answer we received: