The Kaiser and the Holocaust

Kiaser Wilhelm-2 was the Emperor of Germany. He was also a diplomat and politician. From an early age he had surrounded himself with racial theorists who were also anti-Semitic. Even so he used Jewish ministers and appreciated some Jews as individuals. During World War 1 the Germans had been allied with Ottoman Turkey. The Turks ruled over Palestine. In 1914 there were ca. 85,000 Jews in Palestine. This number was reduced to 56,000 due to emigration, deportations, economic stringency, disease, and hunger. At one stage the Turks intended to treat the Jews in Palestine as they had the Armenians in Turkey. German officials intervened. The Kaiser had given instructions to prevent actions against the Jews (1). At this stage (ca. 1917) however the Germans still hoped to receive support from the Zionists in the USA.

After the war the Kaiser was deposed and moved to the Netherlands. When Hitler came to power and invaded France and the Netherlands the Kaiser was proud of their achievements. Nevertheless he was critical of the Nazi style.
He is reported to have expressed dismay as to how 'his' Jewish subjects were being treated. His wife denied such a report saying that nothing positive on behalf of the Jews had been uttered. Nevertheless it seems that some such sentiments may have been expressed. Wilhelm also spoke as if a restoration of his own dynasty was a possibility. His reported sympathetic expressions regarding his Jewish subjects should be seen in this light.

Wilhelm had earlier spoken against the Jews and as if he was in favor of their extermination. There are therefore apparent contradictions in his attitude. However one understands this, both attitudes reflect trends of thought in Germany regardless of the Nazis. Hitler and his cohorts put into practice what many Germans had been thinking before them and independently of them.

On 2, December 1919, the now-deposed Kaiser had written to General August von Mackensen calling for a "regular international all-worlds pogrom", as "the best cure" against Jews.
'The Jews and mosquitoes said Wilhelm were,

"a nuisance that humanity must get rid of in some way or other"...

In the mid-1920s Wilhelm called for a struggle against Jewry throughout the world. He urged that the Bible be re-written to eliminate most of the Old Testament, so leaving only genuinely Christian elements, which he claimed were Zoroastrian and therefore 'Aryan' in origin and 'not Semitic-Jewish' at all.

Not only the Jews were on target however. Others were also in line:

In 1923, after hearing a lecture by the anthropologist Frobenius, the Kaiser had an almost religious revelation. Suddenly he realized, he said, that the French and the English were not whites at all but blacks. The future mission of the German people was now clear to him:

'We shall be the leaders of the Orient against the Occident! We belong on the other side!'

The Germans were not part of the West, but the 'face of the East against the West'. The main thing was that England, France and America should 'go under!'

The Kaiser with his second wife. 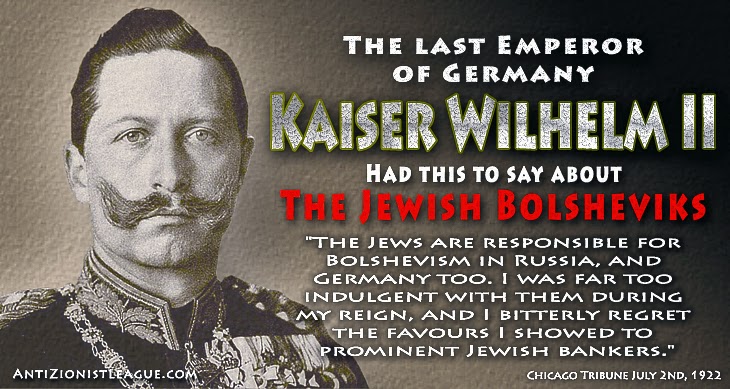