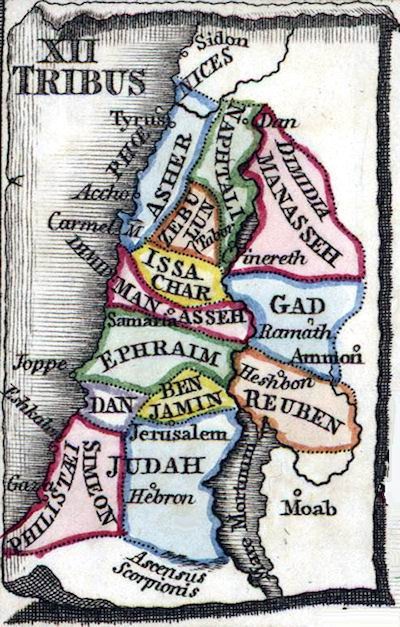 What happened to the 12 tribes of Israel?
https://www.quora.com/What-happened-to-the-12-tribes-of-Israel/answer/Yair-Davidiy

There were actually 13 Tribes but for metaphysical reasons a quorum of 12 is always maintained in Scripture. This is done either by (1) not counting Levi who was scattered among the other Tribes; or (2) by counting the two Tribes of Ephraim and Manasseh as the one Tribe of Joseph; or (3) by not counting Simeon who in some ways was subsumed with Judah. The Commentary of Nachmanides (1194 - 1270) discusses this (Deuteronomy 33:6). The 12 sons of Israel were Reuben, Simeon, Levi, Judah, Issachar, Zebulon, Asher, Gad, Naphtali, Dan, Joseph, Benjamin. The descendants of Joseph were to be counted as two separate Tribes, Ephraim and Manasseh (Genesis 47:5).
See:
Quorum of 12
http://hebrewnations.com/articles/bible/quorum.html
After the death of King Solomon the Israelites divided into two sections. In the south was the Kingdom of Judah ruled by the House of David. It comprised the Tribes of Judah and Benjamin (1-Kings 16:23). Later most of Levi joined them along with minority Representative of the other Tribes (2-Chronicles 11:13-14, 15:9). From the Kingdom of Judah emerged the Jewish People as we now know them.
In the north was the Kingdom of Israel ruled at first by Jeroboam from the Tribe of Ephraim (1-Kings 12: 16-20). It comprised:
(a) In the North: The Tribes of Ephraim, Manasseh, Dan, Asher, Issachar, Zebulon, Naphtali.
(b) In the east: The Tribes of Reuben, Gad, and the half-tribe of Manasseh.
(c) To the south and southeast was the Tribe of Simeon which was also associated with the northern Kingdom (2-Chronicles 34:6). These divisions (a, b, and c) became known as the Ten Tribes (1-Kings 11:31, 35).

The Ten Tribes were exiled by the Assyrians, and lost awareness of their ancestry. This is described in the Bible and corroborated by Assyrian inscriptions and archaeological findings.
2-Kings 15:29 records the exile of the Tribes further to the north, (a) above.
2 Kings 17:6, 18:11 speaks of the Tribes north of Benjamin in Judah, especially those of Samaria i.e. Ephram and Manasseh, (a) and (b) above.
1-Chronicles 5:26 describes the exile of the Tribes east of the Jordan, (c) above.
The Tribes exiled by Assyria are referred to as the "Lost Ten Tribes," after the Tribes who were lost (Hebrew "ovdim") in the Land of Assyria (Isaiah 27:13). [Many from the Kingdom of Judah were also taken with the Ten Tribes into Exile as hinted at in Scripture (2-Kings 18:13, 2-Chronicles 32:1), mentioned by the Midrash, and confirmed by archaeology].
Brit-Am/Hebrew Nations teaches that the Lost Ten Tribes eventually became foundational elements in the ethnogenesis of certain Western Nations especially those of the British Isles and the coastal areas of Europe.
See:
http://hebrewnations.com/
In addition to the above, a section of the Tribe of Simeon and some of the others created the Kingdom of Khazaria, converted to Judaism, and in part re-united with the Jews.