Were the ancient Greeks aware of Ireland?
https://www.quora.com/Were-the-ancient-Greeks-aware-of-Ireland/answer/Yair-Davidiy
Answered Aug 15 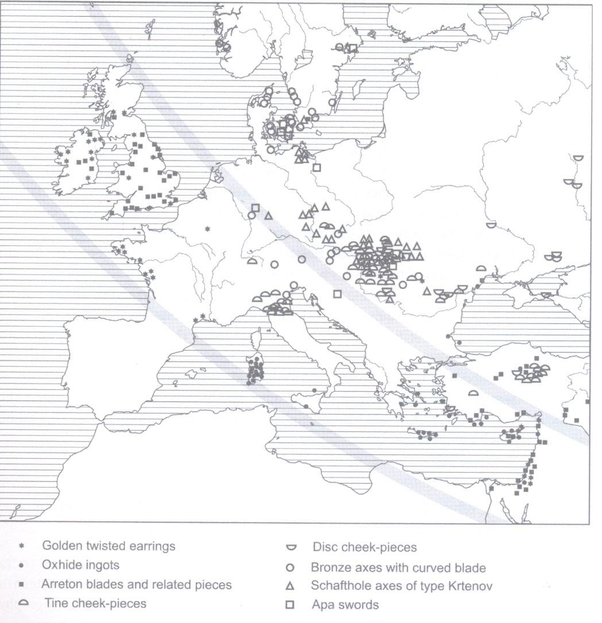 Source of Map: "The Rise of Bronze Age Society. Travels, Transmissions and Transformation" by Kristian Kristiansen and Thomas B. Larsson, Cambridge, 2005, p.211.

Map shows (among other things) links in the Bronze Age between Ireland and Britain with the Ancient Middle East including Greece and Israel.

Were the ancient Greeks aware of Ireland?

It is almost certain that the Ancient Greeks knew about Ireland. Archaeology has shown that a group of people associated with the Mycenean Greeks traded with the British and/or settled in Britain itself.
See accompanying map from "The Rise of Bronze Age Society. Travels, Transmissions and Transformation" by Kristian Kristiansen and Thomas B. Larsson, Cambridge, 2005, p.211. It shows Arreton Blades and related pieces in Ireland, Britain, the Mycenean Greek area and much more heavily in the region of Ancient Israel and Phoenicia.
See also, " The Dirks and Rapiers of Great Britain and Ireland, Volume 7," By Colin Burgess, Sabine Gerloff, p. 17 where the authors suggest that the preponderance of Arreton type findings in IRELAND indicates Ireland having been an early major center (or THE major center) for the culture in question. This is all a part of the so-called "Wessex Culture" which the experts date to the Bronze Age and say it lasted from ca. 2000 to 1400 BCE. We however would date it from ca. 700 BCE to 100 BCE or later.

The Notes below concern both Ireland and Britain since the sources often refer to both of them together.

Ireland and Britain were identified by the Greeks with the Elysian Fields i.e. the Place of the Dead. Other identifications have been suggested but these appear to be latter amendments.

The Elysian Fields in Greek Mythology were Isles in the West where the Dead went to.

These places were mostly identified with Ireland and Britain.
This belief has been traced (tentatively) to the Assyrians and the lore of Ancient Mesopotamia, see: Emil FORRER, "Die Provinzeiteilung Des Assyrischen Reich,"
"Zeitscrift Fur Assyriologie," Berlin And Leipzig 1929, Strasbourg 1909.

Another name for the Elysian Fields is Elysium.

Extract:
Elysium or the Elysian Fields is a conception of the afterlife that developed over time and was maintained by some Greek religious and philosophical sects and cults. Initially separate from the realm of Hades, admission was reserved for mortals related to the gods and other heroes. Later, it expanded to include those chosen by the gods, the righteous, and the heroic, where they would remain after death, to live a blessed and happy life, and indulging in whatever employment they had enjoyed in life.
The Elysian Fields were, according to Homer, located on the western edge of the Earth by the stream of Okeanos. In the time of the Greek oral poet Hesiod, Elysium would also be known as the Fortunate Isles or the Isles (or Islands) of the Blessed, located in the western ocean at the end of the earth. The Isles of the Blessed would be reduced to a single island by the Thebean poet Pindar, describing it as having shady parks, with residents indulging in athletic and musical pastimes.[
The ruler of Elysium varies from author to author: Pindar and Hesiod name Cronus as the ruler, while the poet Homer in the Odyssey describes fair-haired Rhadamanthus dwelling there.

The Elysian Fields are identical in Mythology with the Fortunate Isles or Isles of the Blessed.

Fortunate Isles
From Wikipedia, the free encyclopedia
https://en.wikipedia.org/wiki/Fo...
The Fortunate Isles or Isles of the Blessed were semi-legendary islands in the Atlantic Ocean.. inhabited by the heroes of Greek mythology. .... A feature of the fortunate islands is the connection with the god Cronus; the cult of Cronus had spread and connected to Sicily, in particular in the area near Agrigento where it was revered and in some areas associated with the cult of the Phoenician god Baal.

This connection with both Cronus and Baal helps confirm the identification with the Isles of Britain. The Isles in the West appear to have included Ogygia in Homer. Plutarch identified Ogygia with an island off the coast of Britain which fits the position of Ireland. Plutarch also equates Ogygia with the place of Exile of Cronus also known as Saturn. The Romans identified Israel with Saturn (Cronos). They said that Saturn had been driven out of the Middle East and had gone with his followers to one of the Isles of Britain.
Baal was also associated with Britain.

"The Honey Isle of Bel" was a name applied to Britain. "Bel" is the equivalent of Baal. "Bel" was the chief god of Ireland and Britain.

The Edomite Connection
Ogygia was described as being the neighborhood of Scheria, recalled by Homer. This has been identified with island of Corfu off the coast of Greece. Strabo, however, and others placed Scheria along with Ogygia in the Atlantic Ocean. Scheria was populated by the Phaiakians who name means "dark-skinned." Otherwise the Phaiakians were expert seafarers and remind researchers of the Phoenicians.

In fact Strabo, when speaking of Tartessos and the Atlantic Ocean, asserts that it was a literary method of Homer to name peoples and places after those familiar to his readers and after slightly altering them. The Phaiakians would therefore have been named after the Phoenicians.

Gerardo CROESI ("Siv Historia Hebraeorum Ab Homer," Dordrecht, Holland 1704) believed that the Scheria of Greek mythology was in Thrace and that the name derived from Mount SEIR which in the Bible is associated with Edom (e.g. Genesis 33;16) and often used as synonymous with Edom. We disagree with Croesi concerning Scheria being in Thrace but agree with him in his linguistic equation of Scheria with Seir. There were Edomitie polities in the north as well as the south. In ancient times place-names moved often according to set patterns from one area to another. Different identifications for the same names are therefore not mutually exclusive.
The Prophet Amos speaks of Israelites being exiled by ships [Amos 4:2] by the Philistines [Amos 1:7-8] and Phoenicians [Amos 1:9] to an area controlled by Edom.
http://britam.org/amos.html

Scheria may been part of this region. We have additional evidence of Edomites controlling Britain and ruling over captured Israelites. The Edomites worked as agents of the Assyrians in overseeing their overseas possession.

Another sources relevant in this context is Aylett Sammes (1674).

BRITANNIA ANTIQUA ILLUSTRATA: OR, THE ANTIQUITIES OF ANCIENT BRITAIN, Derived from the Phoenicians

Sammes quotes Cambden that the Isles of Britain were the Islands of the Blessed, being also known as the ELYSIAN FIELDS. They were part of The Kingdom of Darkness and Places of Rest, to which Virtuous Souls were carried after their departure out of a temporal Being.

Sammes shows that the Phoenicians were also called the Idumaeans of Tyre and that they had colonies in Britain. Tyre was the principal Phoenician city.
See Also:
Aed and the Lost Tribes in Britain. The Lost Ten Tribes in Celtic and Arabic Lore
http://www.britam.org/aed.html

In some version Ireland is referred to as Isle of the Blessed whereas Britain is considered the Isle of the Dead.

See Also:
James H. Charlesworth , THE HISTORY OF THE RECHABITES, Vol. I: The Greek Recension (Scholars Press (c) 1982)., quoted by George Brooks.
Refers to the Rechabites (in Later Jewish Tradition) being found in the Isles of the Blessed.

Sammes also shows that the Domnonii who settled in the southwest of Britain (in Devon and Cornwall) were originally known as Dan. This people was linked with the Tribe of the deity Dana in Ireland.
See:
The Names of Ireland and the Ten Tribes
http://www.britam.org/NamesErin....

The Celts of Gaul also viewed Britain as a place for the dead to dwell in.

"There were also superstitions regarding Britain herself: for example the eerie story that she was the abode of the dead and that souls were rowed across in unmanned boats, which left the coast of Gaul at nightfall and returned before dawn. Thanet, the name of Kent's north-eastern extremity may originate in this legend." Greek thanatos 'death'. Related in garbled form by Procopius in de Bello Gothico (I.iv.20).
Romans and Barbarians by Derek Williams (p.122).

to the West and to the Isles of the Blessed, see:
A. J. WENSINCK, "The Ideas of The Western Semites Concerning the Navel of the Earth," Amsterdam, Holland, 1916.
Both the Children of Moses and the Rechabites were associated with the Ten Tribes (See Rashi on Numbers 24:21-22, regarding descendants of Jethro).Â
See:
Shimeon Menachem LAZAR, "Eseret HaShevetim VePitronan," Drohobycz, 1908, p.14.

Another name used for Ireland by Latin writers is Insula Sanctorum or the Island of the Saints.