Amal, the wife of George Clooney, comes from a Druze family:

Source of Image: We talked to young Druze about being part of a Lebanese minority 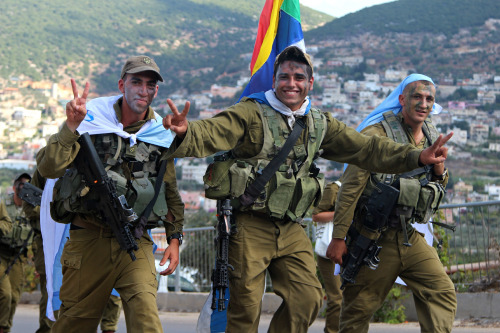 Druze Soldiers in the IDF. Source: New soldiers of the Herev Battalion complete their...

The question was,
Are the Druze people descendants of Jethro, the father-in-law of Moses?

The Druze Religion was founded by Mohammad Al Darazi who had been associated with the maverick heretical (borderline Muslim) ruler of Egypt, Al Hakim (985-1021 CE). At first the religion was open to all but it quickly closed its ranks and ceased officially to allow newcomers. Nevertheless, over the centuries new people came in from such places as Kurdistan. The initial adherents had been concentrated in Lebanon among a group that is believed to have initially come from Persia and to already have had beliefs similar to those later associated with the Druze. The Druze in Israel revere Jethro and consider him their forefather. Jethro (Yitro) was the father of Zippora (Tsipporah) the wife of Moses. Jethro together with his clan attached themselves to Israel. Descendants of Jethro seem to have been divided into two sections: There were those who became completely Jewish and gave rise to some of the Sages. Others remained separate, led a nomadic type of existence and at times were only loosely associated with Israel. Jael (Yael) , who slew the Canaanite military leader Sisera in the story of Barak and Deborah (Judges chapter 4), was the wife of Hebrew the Kenite who would have been a descendant of Jethro. The Rechabites who kept the traditions of their ancestors, did not drink wine, and dwelt in tents (Jeremiah chapter 35) were also descendants of Jethro.
In the past the Druze claimed to be distantly related to the British, French, and Jews. The claim to have had a Jewish connection was repeated in recent years by their religious leader, Sheik Tarif. So too, MK Kara has reiterated belief in Israelite descent of the Druze community.

MK (Member of Knesset) Kara: Druze are Descended from Jews
http://www.israelnationalnews.co...
by David Lev
Extracts:
For centuries, practitioners of the Druze religion took care not to reveal any information about the nature of their beliefs, rituals, and traditions. Under penalty of communal ostracism, or worse, members of Druze communities have refrained from telling any outsider more than basic details about their religion.
'Druze here are too fearful to loudly proclaim their sympathies with Israel, or to convert to Judaism, although some do ' because of the fear of what might happen to their brethren in Syria and Lebanon.'
But now, the secret is out. Druze MK Ayoub Kara (Likud) says members of the Druze communities believe in many of the same things that Jews do. And that's not surprising, he adds, since the Druze are actually descended from the Jewish people ....

According to Kara, who is politically allied with the Jewish nationalist camp, there are many aspects of Druze beliefs that mesh with Judaism: 'All our prophets are Jewish ones: Moses, Judah, Jethro, and Zevulun, the son of Jacob.' In fact, he says, the Druze are likely one of the lost tribes of the Jewish people, probably Zevulun, considering his special status among them.

According to Kara... one symbol has stuck with the Druze throughout the centuries. 'Only among Druze do you find a red Star of David, in homes, cemeteries, and places of worship,' Kara says. 'This is one sign that has been open and visible for centuries, unlike most of the other ones, yet few have noticed.'