Contents:
1. Introduction
2. Africa and Afriki in the Sources.
3. Afriki in Western Europe.
==========
1. Introduction.
In some Jewish sources we find the term "Afriki" or "Africa" connected with the Lost Ten Tribes. it seems to have two main meanings.
(1) It can refer to the Roman province named "Africa" i.e. present-day "Libya" or North Africa in general.
(2). It can mean some place to the north of the Land of Israel such as Phrygia in Northwest Turkey, or the Caucasus or nearby Media.
In addition to the above we have just come across a third possibility where it means the Atlantic Coast Line of western Europe!
In the present article we do not intend to come to any firm decision but rather to simply explore the possibilities.
==========
2. Africa and Afriki in the Sources.

Where were they [the Ten Tribes] exiled to? Matr Zutra said, "To Afriki." Rabbi Chaina said: 'To the Mountains of Slug[Snow]' (Talmud Sanhedrin 94).

The name Caucasus according to Pliny means "Mountains of Snow"

There are those who identify Afriki with Phrygia in northwest Anatolia.

The City of Girgas in Anatolia identified by Herodotos as Thracian. Egyptian records (1000 s and 1100 BCE) speak of Kirkhasha or Kirgasha people in the region. Thse may be names indicative of the Girgashites.
The Gentile Georgians from the Caucasus were  identified with Canaanite Girgashites in some Jewish sources.

Midrash Breishit Rabah 37;1  the sons of Japhet, Gomer and Magog.  Saild Shmuel bar Ami, this is Afrika and Germania.

Rabbi Akiva said: when I went to Afriki (Talmud, Rosha HaShanah, 26:a).

Where were they [the Ten Tribes] exiled to? Matr Zutra said, "To Afriki." Rabbi Chaina said: 'To the Mountains of Slug[Snow].'  The name Caucasus according to Pliny means "Mountains of Snow."

Significantly in ancient Egyptian, ftu or fot means four, while tot can denote a gathering, resemblance, divine, or hard leather. Hence, totafoth may have had the connotation of a fourfold amulet, made of leather, as the Tefillin indeed are.

https://judaism.stackexchange.com/questions/82769/why-would-people-assume-that-afriki-is-africa?noredirect=1&lq=1
Maharal (Netzach Yisroel 34) explains that this is indeed not the Africa of today. He proves it from Tamid 32a that Afriki is a place where there are mountains so high so there is never sunlight. Thus, one couldn't travel there, therefore it's not Africa. And Africa isn't known to have such described mountains.

Gomer in Ber. 10:2 is translated by Targum Yonathan as Afriki. Gomer is identified as Phrygia by Aruch HaShalem.

Le Comte de GOBINEAU  "Histoire Des Perses," Paris, 1869, wrote a history of Ancient Persia and its surroundings according to Ancient Greek, Persian, and Arabic sources. He mentions a place name "Afriki" in Media and says it was an important religious site and a populous city.

Aruch Hashalem (Alexander "Chanoch Yehuda" Kohut 1842 - 1894) says that "Afriki" can refer both to Africa (the province in North Africa -Tripoli-, not the continent) as well as Phrygia.

https://judaism.stackexchange.com/questions/82683/did-rabbi-akiva-go-to-africa
Yitzchak Meitlis in the appendix to his book "Excavating the Bible" writes that the tale of Rabbi Akiva refers to Africa as the same story is found in the works of Procopius (Byzantine historian) where it is related that the Canaanites were afraid of Joshua Bin Nun (Girgashites according to Yerushalmi) and settled in Libya. 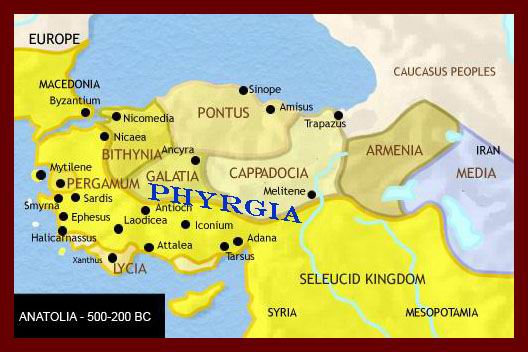 The terms "Afriki" and "Afrika"  appear to be interchangeable.

Afriki is a place where the Lost Ten Tribes were to be found, at least according to one opinion. It is associated with Media or with the Caucasis area or with the region of Phrygia further to the west. It may be near the descendants of Gomer and/or Germany. Phrygia became a center for the Cimmerians before they passed into Europe. The Caucasus was a focal point for the Scythians as was Media. Both the Cimmerians and Scythians were associated with the Lost Ten Tribes under the heading of "Gomer" as symbolized in the Book of Hosea. The Bible also mentioned the Cities of the Medes (i.e. Media) as one of the places whereto the Lost Ten Tribes had been taken (2-Kings 17).

Another opinion identifies Afriki with the Province of Africa (Libya) after which the Continent of Africa received its name.

==========
3. Afriki in Western Europe.
The scholar Francis Wilford held that according to Ancient Greek sources the term "Afriki" could also have been applied to the West Atlanic shoreline including the British Isles and Western Europe.
Francis Wilford (1761-1822) was probably originally from Hanover in Germany. He arrived in India in ca. 1781, and was employed by the army of the British East India Company. He married an Indian woman, and their daughters later married East India Company soldiers.
Wilford became a member of the Sanskrit Scholars and Orientalists circle associated with the Asiatic Society of Bengal that included the foremost scholar William Jones,  and others. Wilford resigned from the army and devoted himself to a study of Indian sources.  His writing shows familiartiy with ancient Greek, Arabic, and Persian literature. He also employed a large staff of Indian assistants, copyists, translators, and surveyors and concentrated on reconstructing ancient Hindu Geography. In 1788 Wilford claimed to have found innumerable references to ancient Egypt, its Kings and holy places in Hindu Literature; He inferred that a group of Indians had settled on the banks of the Nile, Egyptian and Hindu learning had been linked, and that  Western learning received through the Greeks was of partly Hindu origin.

Francis Wilford "Asiatic Researches," vol. 8  An Essay on the Sacred Isles in the West, and other Essays connected with that Work are available online.
https://archive.org/stream/in.ernet.dli.2015.190826/2015.190826.Asiatic-Researches--Vol-viii-Th_djvu.txt

Here are some relevant excerpts of possible interest. We have made some minor editorial changes but the basic text is the same and on all major points we have left the words as they were.

Quote:
VI. The Sacred Isles in the West.
In Hebrew, the word Ophir, without vowel points is written Aupir; ...That country, we are told, was thus called from a certain Apheos, or Aphraus, who was the son of  Saturn and the nymph Pheaura, according to the Paschal chronicle. He was the brother of Piscus and Chiron, and is called Aphar by Cedrenus.. Another ancient author, as I have somewhere read, calls him Ophris and Aphra; and says he was a companion of Hercules :...Isidorous adds  that the apellation of Aser was supposed to have been Aper originally. The word "Aparica" is then synonymous with Ibericus, Iberka, etc. The Latin word Apricus seems to have been used to denote a westerly situation. Apareyam and Apareya are regular derivative forms from Apara ; and from there is obviously derived Iberia, the ancient name of the Western parts of Europe, including Gaul and Spain. Homer uses, in that sense, the appollations of Hypereia... Abera is found in Apollodorus; for thus we must read instead of Abdera, as we shall see hereafter....

Crauncha includes Germany; 'Saeam, the British isles;...
The fifth division is called Crauncka, and Crauri'dd, which included Germany, France* and the Northern
parts of Italy. . Crauncha is the same with Cronus, confounded with Saturn by Western mythologists; and the Baltic and Adriatic seas were, probably, called Cronan, from the Land of Craunca.

The sixth division is called Saca, and Sucum, and includes the British isles. It is surrounded by the Sea of Milk, or the White Sea; ... It is call-
ed also ...Sea of Amrlta, synonymous with Amalaci, from which they made Amalchium in the West.

It is well known to the learned, that, at a very remote period, Europe and Africa were considered but as one of the two grand
divisions of the world ; and that the appellation of Africa was even extended to the Western parts of Europe, all along the shores of the Atlantic. Hence the West wind, or Zephyrus, is called the Lybian or African wind...

In Europe they called the West Hesperus, and the country toward the West Hesperia. That country is considered by the Paurdtiics, as the abode of the gods, or Suralayam, an appellation well known to the learned, and applied by them, in conformity with the Puranas, to the Westernmost part of Europe, or the British Isles.
Another denomination for Suralayam, and which might be Sanscrit, is Isdura, ... This was pronounced by the Gothic tribes As-burh, As-byrig, As-purg'ium: they said also As-gard, which implies the same thing.

Suralayam the name for Britain may be derived from an Assyrian form for Israel.
"Saca" is the name given to the Scythians who moved to Western Europe.

From our point of view, AT PRESENT THE MOST IMPORTANT POINT MAY BE THE DECLARATION:

the appellation of Africa was even extended to the Western parts of Europe, all along the shores of the Atlantic.

This equates Afriki with the coastal areas of Western Europe and this indeed is where the Lost Ten Tribes were to be found.