1. Introduction.
The Theory of Evolution dominates the thought of scientists and others in the world today.
For many it is related to like an Article of Faith of Major Religions.
This Theory was necessary to explain known phenomenon. It was not perfect but it was all there was in place of the arbitrary FIAT of a Creator.
The transference of genes when needed between living organisms in effect nullifies the need for  Evolution and fits the known facts much better.
^^^^^^^^^^^^^^^^^ 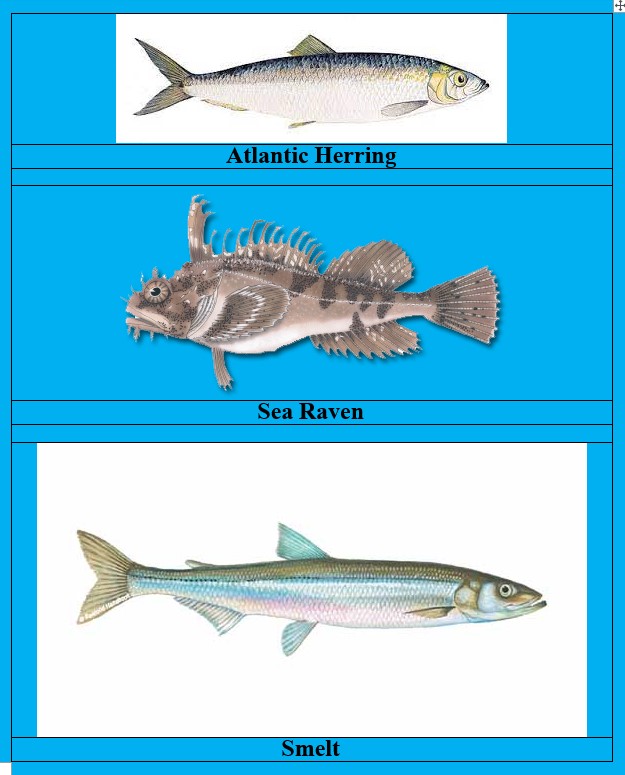 A Fishy Storey, Herring.
Herring live in the North Atlantic and in the North Pacific. There are different types of herring.
They spawn (hatch eggs) in one place and then move to another.  They   seasonally migrate between wintering, spawning and feeding grounds
Their migratory path provides fish for fisherman on the coast.
Sometimes the pathways change. Factors determining changes in the migratory routes may be the relative salinity of the oceans, temperatures of the water, predators such as whales, etc..
Within recorded history the breeding grounds of herring have changed several times over.
At one stage Herring in the North Atlantic needed to move further northward. The problem was that the water in that area was colder and more icy than what they were built for.
They therefore acquired an "anti-freeze" gene from another breed of fish hypothesized to be a species of sea raven.
Later another breed of fish, smelt, a species of sardine, also needed the anti-freeze factor so they got it from the herring.

And how did these fish get the gene from each other?
Apparently through Horizontal Gene Transfer (HGT).

The fish with the gene received a biological message to excrete the gene into the water. The fish without the gene then picked it up.
The gene moves from one body to another. This movement can affect WHOLE populations in a short period of time.

This occurs throughout the animal kingdom possibly even between species and plants.
This is similar to Genetic Modification in GMOs.

Genetically Modified Organisms (GMOs): Transgenic Crops and Recombinant DNA Technology
https://www.nature.com/scitable/topicpage/genetically-modified-organisms-gmos-transgenic-crops-and-732/
# Some benefits of genetic engineering in agriculture are increased crop yields, reduced costs for food or drug production, reduced need for pesticides, enhanced nutrient composition and food quality, resistance to pests and disease, greater food security, and medical benefits to the world's growing population. Advances have also been made in developing crops that mature faster and tolerate aluminum, boron, salt, drought, frost, and other environmental stressors, allowing plants to grow in conditions where they might not otherwise flourish (Table 1; Takeda & Matsuoka, 2008). Other applications include the production of nonprotein (bioplastic) or nonindustrial (ornamental plant) products. A number of animals have also been genetically engineered to increase yield and decrease susceptibility to disease. For example, salmon have been engineered to grow larger and mature faster, and cattle have been enhanced to exhibit resistance to mad cow disease (United States Department of Energy, 2007). #

Artificially,
Red Tomatoes sell quicker than green ones do. GMOs may take a red coloring gene from another plant, such as a berry, and graft it into the tomatos making sure that it turns out nice and red and aleable.
Nature does the same.

And how does this take place in nature?

Transformation,
The gene is released into the atmosphere, or water, and travels to the needy party.

Transduction foreign DNA is introduced into a cell by a virus or viral vector which acts to spread segments of DNA from one organism to another.

Conjugation
Bacterial cells temporarily join together and in the process segments of DNA in one cell are replicated which after renewed division of the two parts become copies of each other.

Most gene transfer appears to take place through Gene Transfer via the air or water.
^^^^^^^^^^^^^^^^^
5. Frequency of Genetic Transfer
Several plants are known to have acquired a single mitochondrial gene by horizontal gene transfer (HGT),
https://www.pnas.org/doi/10.1073/pnas.0408336102

Horizontal Gene Transfer Happens More Often Than Anyone Thought
https://www.the-scientist.com/features/horizontal-gene-transfer-happens-more-often-than-anyone-thought-70118
DNA passed to and from all kinds of organisms, even across kingdoms, has helped shape the tree of life, to a large and undisputed degree in microbes and also unexpectedly in multicellular fungi, plants, and animals.

In  the past the phenomenon was known concerning microbes and throught not to be pertinent to highter forms of life BUT now that has changed.
# Today it is estimated that between 1.6 and 32.6 per cent of the genes of each microbial genome have been acquired by horizontal gene transfer (Koonin et al. 2001). Moreover, a recent study by Dagan et al. (2008) using a network analysis of shared genes in 181 sequenced prokaryotic genomes shows that this increases dramatically to 81+15 per cent if the cumulative impact of horizontal gene transfer towards lineages is considered, which reinforces the importance of this mechanism in microbial evolution. #

Mobile genetic elements
https://en.wikipedia.org/wiki/Mobile_genetic_elements
Mobile genetic elements (MGEs) are a type of genetic material that can move around within a genome, or that can be transferred from one species or replicon to another. MGEs are found in all organisms. In humans, approximately 50% of the genome is thought to be MGEs.
^^^^^^^^^^^^^^^^^
6. Implications. Evolution is no Longer Necessary?
DNA can change under certain conditions almost overnight!

Brit-Am does not accept Evolution.
See:

Brit-Am Versus Darwin
https://hebrewnations.com/articles/race/versus.html
We do NOT believe claim that organisms change by gradual adaptation to the environment from one type to another.
We do however understand that within different types of organism exists an inbuilt designer-installed genetic potential to adapt suddenly and totally from one sub-type to another.
For instance we deny that a butterfly can change into a budgerigar no matter how long they try.
Theoretically however all the white butterflies in one region could change into black ones within a  generation or so.
So too, certain DNA types can change into other ones under certain circumstances. This could happen almost at once and involve entire populations.

Evolutionists claim that organisms change from one type to another by gradual adaptation to the environment. They sometimes refer to DNA findings and they believe in DNA science. They however tend to deny that DNA can evolve or change radically in a short space of time.

Creationists seem to say that everything was created as it is at the time of Creation and then no further improvements were needed and neither did they take place.
No so.
In Arctic climes many of the animals have white furs or feathers. The bears, the rabbits, hares, walrus, seals deer, tigers, owls, wolves, foxes, geese, etc. Do an Image search of Arctic Animals on a Web Search Engine and see for yourselves.
And as for human races why we have types of Monkeys that look quite "Caucasoid" with blondish hair and blue eyes and we have other types of monkeys in areas populated by Mongoloid people that also look mongoloid!
Thousands of parallel examples from the natural world exist and in some of our articles we have quoted them.

A population of a certain type reaches a new place. At some time under certain conditions over a very few generations all the specimens of that population will experience DNA changes. At the end of this process the change will be fixed and henceforth all future generations will breed true to the new type. Even if they move after that to another place they will continue with the type they have acquired UNLESS another MASS change takes place and the population reverses back to what it once was.
They borrow the necessary genes from each other.

The Beauty and Attractiveness of Evolutionary Theory in the past was that it enabled Nature to be explained.
It fit the known facts better than anything else it was very convenient.
The problem was that nobody had ever seen it happen.
This was solved by saying that the necessary changes took millions of years and were very gradual.
Now we have gene transfer which is almost immediate ad encompasses whole populations at one and has been observed, with microbes, etc, under laboratory conditions!

^^^^^^^^^^^^^^^^^
7. DNA can change under certain conditions almost overnight!
Implications. Changes in DNA no longer a Problem for Brit-Am!
Brit-Am understands from the Bible and history that the people of Western Europe came from the Middle East and are brothers to the Jews.
Most men in western Europe have Yhaplogroup R1b DNA, some have Yhaplpgroup I DNA, and others have R1a.
Most Jews have ca. 1/3 J (J1 and J2), 1/3 E, 1/3 others), with J being found in ca. 80% of Cohens.
This was a barrier to the acceptance of Brit-Am but now may be explained HGT and environment.
In addition to this it admitted that R1b probably originated in Turkey near to Ancient Israel and also that historically it was associated with J from the Middle East.
None of this necessarily proves anything BUT it makes a physical connection between the Jews and Western Europe scientifically feasible whereas before then it would have seemed much less so.

cf. Arctic Animals as an Example In Arctic climes many of the animals have white furs or feathers. The bears, the rabbits, hares, walrus, seals deer, tigers, owls, wolves, foxes, geese, etc. Do an Image search of Arctic Animals on a Web Search Engine and see for yourselves.
And as for human races why we have types of Monkeys that look quite "Caucasoid" with blondish hair and blue eyes and we have other types of monkeys in areas populated by Mongoloid people that also look mongoloid!
Thousands of parallel examples from the natural world exist and in some of our articles we have quoted them.