The Jews of Yemen were in part also from the Ten Tribes! The implications confirm Brit-Am Studies! 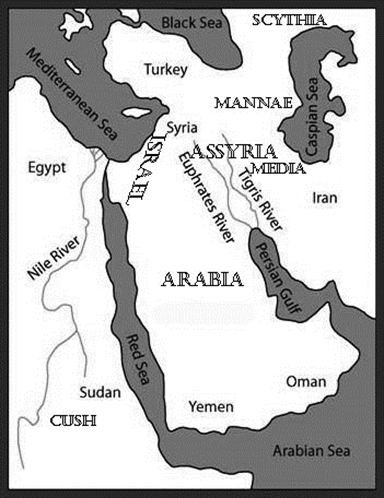 Translation from the Foreword of "Melecet Shlomoh" to his commentary on the Mishna (Zeraim):

# Says the young minister, Shlomoh ben Yishua ben Halpon Ha-Adani... From the House of the father of my father from the cities of Yemen have I  received [the tradition that] we were exiled from the First Exile, as it says towards the end of the Book of Kings, [concerning the Ten Tribes] "and placed them in Halah and in Habor by the River of Gozan, and in the cities of the Medes (2-Kings 17:6).

Who Wrote the Commentary "Melect Shlomoh" ["The Craftsmen ship of Solomon"]?

Rabbi Shlomo Adani - 17th Century Scholar of Hebron http://en.hebron.org.il/history/694 Extracts: Rabbi Shlomo Adani (1567 -1629) is considered one of the greatest commentators on the Mishnah and a part of Hebron's rich history of Torah scholarship. He is referred to in the 1906 Jewish Encyclopedia and in other English sources as Rabbi "Solomon Edni." He was born in Sana'a, Yemen to Rabbi Yeshua Adani, a leading rabbi of the city. The family immigrated to the land of Israel in 1571. ... There  [in Jerusalem] Shlomo studied with the renounced Rabbi Betzalel Ashkenazi, the author of the "Shita Mekubetzet," and with Rabbi Chaim Vital, the noted disciple of the ARI.

The Rabbis mentioned above with whom Rabbi Adani was associated include some of the greatest known to Jewish History and among the most revered.
Rabbi Adani  is saying that his family and by implication the Jews of Yemen in general were descended from the Lost Ten Tribes.

The family (by marriage and offspring) of Yair Davidiy  is partly of Yemenite origin. I also served with them in the IDF and lived alongside them in civilian life. They do not like eing considered as different from Jews in general. The tradition of descent from the Lost Ten Tribes (assuming it is correct) would not apply  to them all. The Jews of Yemen historically had connections with Jews of Egypt. Syria, Babylon, India. They received some settlers from those areas.

How did I come across this source?
It should be well-known but it is not. I have read quite a few Hebrew-language anthologies concerning the Lost Ten Tribes and never before come across it!
I am friendly with the family of a leading Hasidic Rabbi. They know of my Brit-Am researches and activities. They enjoy discussing the matter sometimes challenging conclusions, or commenting on them and adding observations of their own.
One of them came across the source above and showed it to me.

This information also does not detract from our Brit-Am identifications. On the contrary. In the light of previous reseaches it confirms them.
It shows we were on the right track.
In our book, "Ephraim. The Gentile Children of Israel" (first published 1995) we wrote:

# The early post-Christian Jewish populations of Palestine and Arabia appear to have had the notion that the Lost Ten Tribes, or at least part of them, were in the Blessed Isles of the West. This in Classical Terminology meant the Isles of Britain and Ireland!

This concept reflects an earlier tradition.....
Prior to the birth of Mohammed (ca.571 CE) some of the tribes of Arabia practiced Judaism or a primitive form of it. In addition the pagan majority of Arabs had in many cases been exposed to Jewish influences and to early Christian concepts. The Arabian Jewish tribes in some cases were probably native Arabians who had converted to Judaism. Some of them however had first appeared in the 600s BCE shortly after the Lost Ten Tribes had been exiled and so too may have been descended from exiled Israelites.

After the Israelite Tribes were exiled by the Assyrians these Tribes were re-settled in different areas of the Assyrian Empire. Many groups from the Israelite Tribes retained their original Tribal Identity. They usually federated with other Israelite entities and are identifiable as part of the Scythian forces. Most of the Israelites were due to be pushed northwards as part of the Scythian hosts though some groups retained a presence for some time in the Iranian area. In Scythia one group identified by its neighbors as Israelite called itself 'Naphtali.' The Naphtali were also referred to as 'Cadussi.' This people had first been recorded close to Mannae southwest of the Caspian Sea. The area was one of the major regions to which Northern Israelites had been transported by the Assyrians. The Apocryphal Book of Tobias mentions Israelite exiles from the Tribe of Naphtali in Ecbatana and Rages of Media both of which adjoined the Cadussii area.

Tobit 1:
1-2 "This is the story of Tobit, son of Tobiel, son of Hananiel, son of Aduel, son of Gabael, son of Raphael, son of Raguel, of the family of Asiel, of the tribe of Naphtali. He was taken captive in the time of Enemessaros [i.e. Shalmanessar] king of Assyria, from Thisbe which is south of Kedesh Naphtali in Upper Galilee above Hazor, behind the road to the west, north of Peor."

. "After the deportation to Assyria when I was taken captive and came to Nineveh..." (Tobit 1:10).

"All my kinsmen grieved for me, and Ahikar looked after me for two years until he moved to Elymais" (Tobit 2:10).

"Sarah, the daughter of Raguel who lived at Ecbatana in Media" (Tobit 2:7).

"I have often travelled into Media and used to lodge with Gabael our fellow countryman who lives there at Rages" (Tobit 5:6).

The Book of Tobias (Tobit) thus testifies to the presence of Israelite Exiles from the Tribe of Naphtali in the Cadussi area. Later we have evidence of a people to the north in Scythia who were known as Naphtalites also being referred to as Cadussi or 'Kadussi'. The very name 'Kadussi' may be derived from a Hebrew word meaning 'Holy Ones' (Kadoshi). Kedesh Naphtali in Upper Galilee had been the major center in the Territory of Naphtali. This is close to where Tobit says he came from. Kedesh Naphtali is where the name Cadussi (also rendered as 'Kadussi') derives from.

The Naphtalites were called Cadussi by the Greeks, Romans, and Persians but Pliny (N.H. 6:18) reported that they termed themselves "Gaeli". The Cadussi-Gaeli were related to the Sacae Scythians according to Xenophon. [We identify the Sacae as ancestors of the Angles and Saxons who invaded Britain]. The Cadussi (or Kadussi) later moved northwards into Scythia east of the Ural mountains where they were also referred to as Naphtalites or Naphtalite Huns though some sources still referred to them as "Kadassaye" i.e. Cadussi. Legends, their Tribal names, and additional factors link them to the Israelite Tribes of Naphtali, Dan, Judah, and other Israelite Tribes. After a series of wars and migrations the Cadussi-Naphtalites (who were also known as "White Huns" and sundry other names) split up into several groups. The majority went westward and entered Scandinavia to form what later became the Danes and Norwegians. Another portion remained in Scythia to eventually merge with the Khazars who converted to Judaism. ...... Still another small band of Naphtalites went to the South Arabian kingdom of Kinda..

A group of Naphtalites had been employed by the Persians to mind their frontiers in the 420s CE. In the course of time these Naphtalite frontier guards left the Persian domain and took service in the south with the Kinda who had territory between Iraq and Oman. The Kinda rulers intermarried with, and were an offshoot of, the Himyarite Royalty of Yemen. The Kinda kingdom was eventually destroyed due to attacks of an adjacent Syrian regime and its major portion (which had been centered on the south) was  absorbed  by  Himyarite  Yemen.  Many  of  the  Kinda royalty (like the Himyarites of Yemen) had converted to Judaism. The Himyarite Dynasty had existed for several centuries. In later Persian-Moslem tradition the Himyarites were linked dynastically with the Israelites and with the Sacae- Scythians both of whom were represented by the figure of Zohak.

We had explained that the Ten Tribes had gone north and were to be identified with groups who ended up in the west.

Small break-off groups from them returned to Judaism and converted. These included the Kinda Royalty and Himyarites of Yemen who in turn were related to the Scythians! They also had traditions that they came from the Ten Tribes.
They settled in Yemen among the Jews there. The traditions they had of descent from the Ten Tribes are true ones and confirm the Israelite Origins of their brothers who did not convert but kept going and ended up in Scandinavian and the British Isles.