Place Names in Alabama of Biblical Significance and their Implications.

The State of Alabama (like other States in the USA ) contains numerous place-names associated with the Bible.
We list these names and search for Tribal Indications or common themes through them. 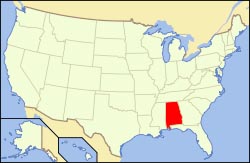 For the sake of convenience in looking the names up on the map we  divided  Alabama into northern and southern sections.
The name of the County is given first followed by the Biblical Name in question.

Birmingham: Ruhamah
Ruhamah is the name a portion of  the Ten Tribes of Israel will receive in the End Times when the ALMIGHTY shall bring them back.
Ruhamah: In Hebrew means "Shown Mercy" .
cf. Hosea 2:
2 Say to your brethren, My people,
And to your sisters, Ruhamah [i.e. Mercy[b] is shown].

Blount: Mount Olive,
Opposite the Temple Mount in Judah.

Calhoun:  Anniston, Bethel, Jacksonville, Mount Olive, Saks, Tarsus,
Anniston is from the name Anna (Chana) who was the mother of Samuel of the Tribe of Levi.
Bethel was on the border of Ephraim and Benjamin.
Ai was near Bethel in Ephraim.
Jacksonville is named after Jacob the forefather of the Israelites.
Mount Olive is in Judah opposite the Temple Mount.
Saks is short for Isaac.
Tarsus was in Cilicia (southeast Turkey) and once pertained to  the Tribe of Dan.

Chambers: Danway, Shiloh,
Danway is from Dan.
Shiloh was in Ephraim.

Cleburne: Ai, Bethel, Lebanon, Macedonia, Palestine
Al and Bethel were mentioned above. They were in Ephraim. Lebanon is part of Israel and belonged to the Tribes of Asher and Menasseh. Macedonia pertained to Javan from Japhet. Palestine is anme derived from the Philistines but was used in the past to denote the LAND OF ISRAEL.

Cullman: Bailleyton, Joppa,
Bailleyton may be named after the pagan god Baal associated with the Ten Tribes.
Joppa initially belonged to Dan (Joshua 19:46) but was taken over by Ephraim.

Dallas: Marion Junction
Marion is another form of the name Miriam who was the sister of Moses and from the Tribe of Levi.

Etowah: Attala, Boaz, Egypt, Gadsten, Sardis City,
Attala reminds us of Athalia the Queen of Judah and daughter of Ahab of Northern Israel (2-Kings 8:18  2-Chronicles 21:6).
Boaz was from Judah. Egypt was a neighbor of Israel and a place of Exile.
Gadsten comes from the tribe of Gad.
Sardis from Lydia.

Franklin: Russellville
The name Russellville means "Little Red Haired" and applies to David of the Tribe of Judah.

Jackson:  Adamsville, Mt Carmel, Pisgah,
Adam was the first man.
Mt. Carmel was in the north, on the coast, on the border of Asher (Joshua 19:26) and Manasseh and pertaining to Manasseh.
Mt Carmel was the scene of the confrontation of Elijah with the prophets of baal (1-Kings 18:16-46).
Pisgah: On the border between Reuben (Joshua 13:20) and Manasseh and belonging to Manasseh.

Marion County
Marion from Miriam of the Tribe of Levi.

Marshall: Boaz, Arab
Boaz married Ruth the convert from Moab. Boaz came from Beth-lehem (Ruth 2:4) in Judah.
Arab is the name of a people descended from Ishmael son of Abraham through his Egyptian concubine Hagar.

Tallapoosta: Daviston, Jackson's Gap,
Daviston is from David of Judah.
Jackson is from Jacob.

Atauga: Mt. Sinai
Mt Sinai was where the Torah was given. It later belonged to Judah or Simeon.

Baldwin: Daphne, Elijah Shoots, Jackson Oak, Josephine
Daphne was another name for Dan. It was also the name of a place a third portion of the Ten Tribes went to.
Elijah was a prophet from Gad, or from Levi, or from a Levite-Priest lining in Gad.. Jackson is from Jacob, Josephine is from Joseph.

Barbour County
Barbour is similar in origin to Barbar. This term could mean Hebrew or it could mean Edomite or other heathen.

Barbour: Bethel, Elamville, Mount Gilead,
Bethel is Benjamin or Ephraim;  Elamville is from Elam which was a place some of the Ten tribes were exiled to (Isaiah 11:11). Mount Gilead was in Manasseh.

Bibb: Antioch, Hebron, Jamesville, Tabernacle.
Antioch was in Northern Syria and once belonged to the Tribe of Asher.
Hebron was in Judah.
Jamesville is from James which is another form of Jacob.
Tabernacle was the precursor tot he Temple in Jerusalem.

Bullock: Sardis, Corinth,
Sardis of Lydia, and Corinth of Greece.

Butler: Mount Moriah, Mount Olive, Providence, Sardis
Mount Moriah is another name for Jerusalem; Mount Olive is in Judah; Sardis is in Lydia.

Chilton: Samaria
Samaria belonged to Manasseh. It was also a nickname for the Ten Tribes in general.

Coffee: Damascus, Jack, Jameston Colony, Tabernacle, Zoar
Damascus was in Syria but in territory pertaining to Manasseh.
Jack is short for Jacob.
Jameston is from James a form of Jacob.
Tabernacle is the Temple..
Zoar was near the Dead Sea probably in the region of Judah.

Covington: Antioch, Beulah, Rome, Shiloh, Valley of Shiloh
Antioch of the Tribe of Asher;
Beulah means the Land of Israel after the Redemption;
Isaiah 62:4
Thou shalt no more be termed Forsaken; neither shall thy land any more be termed Desolate: but thou shalt be called Hephzibah [She who I Desired], and thy land Beulah [con- joined with]: for the Lord delighteth in thee, and thy land shall be married.
Shiloh in Ephraim; Rome of Edom.

Crenshaw: Sardis
Sardis was in Lydia. It may have been once a center for the Cimmerians amongst whom many of the Ten Tribes were to be found.

Dale: Dothan
Dothan was in Manasseh and is associated with Joseph searching for his brothers (Genesis 37:17).

Fayette: Glen Allen,
The name  Allen is from Alon (meaning oak in Hebrew) from the Tribe of Zebulon.

Lee: Salem,
Salem is another name for Jerusalem.

Monroe: Uriah
Uriah was a Hittite in the service of David from Judah.

Pike: Troy, Goshen
Troy of unknown provenance.
Goshen on the border with Egypt and belonging to Judah. Goshen was to the south, in Judah (Joshua 15:51).

Note a recurring pattern: Certain names and themes repeat themselves. For example,  the story of Samuel involved his mother Anna (Chana) and the Tabernacle at Shiloh. These were all recalled in place names at least once and often twice.
We have quite a few from Judah. The Tribes of Joseph (Ephraim and Manasseh) predominate. The theme of the Lost Ten Tribes is recalled.
Dothan where Joseph searched for his brothers is found twice; Daphne where the Ten Tribes went to after bneing exiled is mentioned, as is Sardis which is found several times. The Ten Tribes will be redeemed as recalled in the place names Ruhamah, Beulah, Elam.
The Prophet Elijah will lead the Tribes back to an awareness of their Israelite origins.  He is remembered through the place names Elijah and Mount Carmel.

Ethnic Base.
Wikipedia under entry Alabama tells us: