Biblical Place-Names in Alaska show a predominance of Tribes from which the Jewish People emerged i.e. Judah, Benjamin, Levi. 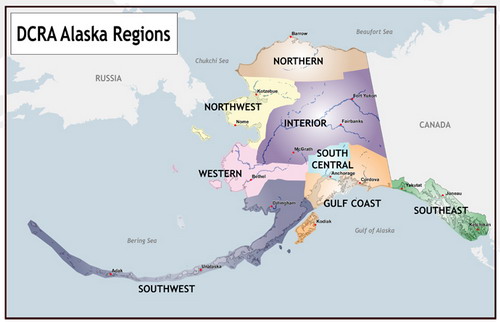 Alaska in Geographical area is the largest state in the USA. Approximately half of Alaska's 722,718 residents live within the Anchorage metropolitan area (South Central Region).
After the discovery of America by Christopher Columbus in 1492 interest in Alaska had been evidenced by both the Spaniards and the Russian. The Russians had prevailed but did little with the territory. The USA purchased Alaska from Russia in 1867.  Alaska is also known as Alyeska, i.e. the "great land" in the Aleut language.

The whites therefore form 77% of the population but only about 50% of the infant children.
The largest group of settlers amongst the whites are of German origin, then come the Irish, after that the English.
Amerindians and Eskimos are about 17% of the population.

The USA is an Israelite country dominated by Manasseh but with elements of all the Israelite Tribes within it.
Many place-names in the USA are of Biblical origin or association. By examining these names we may find clues as to the distribution of Israelite Tribes within the USA.
This idea is not as far-fetched as it may seem. At all events listen to what we have to say and our observations. You will probably enjoy our teaching. You also in many cases may perceive the emergence of patterns in the location of these place names indicating that there really is some significance to their placement.

Alaska probably has the least relative proportion of Israelites in its population. It seems also to have the least number of Israelite place-names. 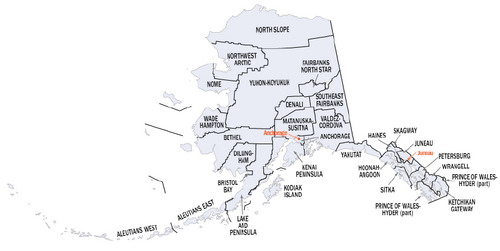 Bethel County (Western Region)
Bethel in Ancient Israel was in the territory of Ephraim near the border with Benjamin. In BenjaminÂ  there was also a place named Bethel. The two places names Bethel (one in Ephraim, the other in Benjamin) may have adjoined each other.

Fairbanks North Star Borough (Interior)
Ester
Esther was descended from King Saul and was from the Tribe of Benjamin.

Haines County (Southeast)
Covenant Life, Davidson Glacier,
Covenant reminds us of the Israelite Covenant with the Almighty.
Davidson is from David, king of Israel.

Matanuska-Susitna County (South Central)
Ammonite Creek
The Ammonites bordered the Israelites. Naamah wife of Solomon and mother of King Rehoboam was from Ammon. This line is probably the one that gives us the future Messiah descendant of David.

Nome (Northwest)
Davidsons Landing
from King David.
Marys Igloo
from Miriam of Levi.
Moses Point
Moses Point Fishing Village
from Moses of Levi.
Saint Michael
Guardian angel of Israel.
Solomon
son of David, king of Israel.
Albion Creek
Albion is a name for England or Britain in general. it may derive from a pronunciation of Lebanon.

Yukon-Koyukuk County (Interior)
Evansville
from Aven in Benjamin.
Galena
Hebrew words such as Geulah redemption, Gilah rejoicing etc. Golan Heights
Abraham Lake
from Abraham
Allen Creek
Allen River
from Elon in Zebulon.
Ruby
from Reuben. Ruby is the name of a red precious gem. In Hebrew it was known as Odem meaning red. The high Priest in the temple Service wore a breast-plate on which were twelve precvious stones. Each stone was ascribed to a particular Israelite Tribe. The Tribe of Reuben had the Ruby (Odem) as its precious stone. The name "Ruby" in English may be derived from Reuben.

Most Biblical Place-names in Alaska are from the Tribes of Judah, Levi, and Benjamin. These are the main tribes amongst the Jews.
There was once a proposal to make a kind of Jewish Reservation in Alaska for refugees fleeing from Nazi Germany.
Nothing came of it partly due to anti-Jewish prejudices of the people of Alaska.
The presence of significant non-Israelite elements in the population of the USA alongside Israelite ones needs to be recognized.