Preliminary Notes.
The Ten Tribes separated from Judah.
They were exiled and they got lost.
Biblical, Rabbinical, Historical, and other proofs trace them to areas of Western Europe.
From there they colonized other places such as Canada, USA, Australia, New Zealand, part of South Africa.
The main  Israelite nation today is the USA. We associate the USA with the Tribes of Joseph, Ephraim and Manasseh.
Manasseh especially helped determine the national character.

Just prior to declaring independence, the Thirteen Colonies in their traditional groupings were:
https://en.wikipedia.org/wiki/Thirteen_Colonies

These are the 13 States with their corresponding Tribes:

This work is still in its preliminary stage. It entails a good deal of speculation and changes will probably have to made later.
Nevertheless even as it now is there is certain rationality behind it serving to confirm the overall direction.

There follows a comparison of the Israelite Tribes in the Land of Israel and their relative locations to each other with our findings concerning the USA.
After that we will go through each of the 13 Tribes discussing VERY BRIEFLY  how we identified each one with a specific Israelite Tribe. 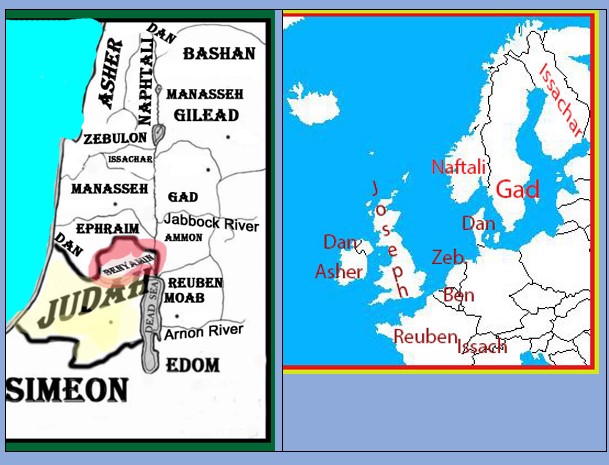 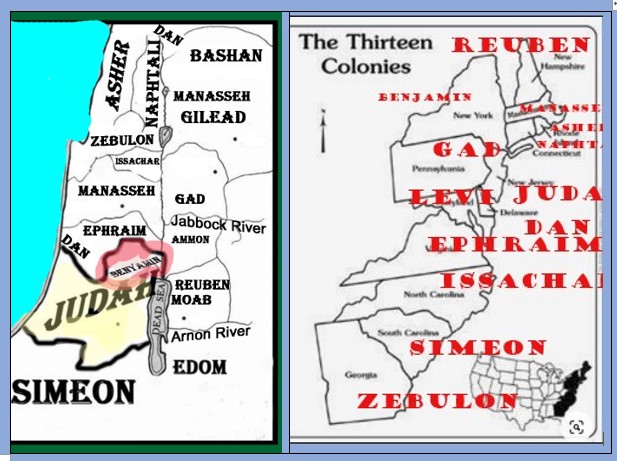 In the USA in the 13 original colonies we find similar configurations as in Ancient Israel. It is however less clear hear sicne the configurations overlap to some degree. We find Simeon in the South (South Carolina). Georgia was named after King George of English. The name "George" means "farmer." Zebulon was named after a "Bait Zebul" or "fertile field." The connotations are similar. Zebulon and Issachar were adjacent in Ancient Israel, in the USA they adjoin each other in the form of Georgia (Zebulon) and Noth Cariolina (Issachar). In Ancient Israel Judah and benjamin were together. Later most of Levi moved to Judah. In America we find New Jersey (Judah), New York (Benjamin), and Maryland (Levi)  close by each other. So too, with the other Tribes. The relative positions are not exactly the same but in most cases they are fairly close.

Even the attributes of the different Tribes, in some cases, are similar to those of their corresponding American States.

Delaware for instance we equate with the Israelite Tribe of Dan. The name "DAN" in Hebrew connotes "Judgement." The Talmud (Pesachim 4;a) describes  a certain person who was always wanting to go to take others to court over some thing or other. He was descended from Dan and through his penchant for litigation he gave expression to his anccestry. Delaware has about a million inhabitants. Only 70% of them are White American. A good portion of the income of Delaware may be traced in some way or other to a preoccupation with legal matters! Delaware allows corporations from other states to register with it. 60% of the companies listed on the New York Stock Exchange are incorporated in Delaware. This provides an income to numerous lawyers, and legal courts, and everything about them, secretaries, assistants, clerks, computer people, maintenance, transport, services, etc. The legal infrastructure and its offshoots also facilitate the functioning of government agencies, insurance companies, financial services, and much else. The modest community taxes paid by all these keeps the State going. In some way or other a good portion of the Income of Delaware may be ultimately traced to courts, litigation, and judgmental processes. This is an aspect of Dan.

Books we found of value in this study include: