Biblical Place-Names and Association in Wisconsin

Duration ca. 27 Minutes. For continuation of article please Scroll Down! 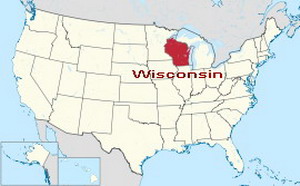 The United States Census Bureau estimates that the population of Wisconsin was 5,711,767 on July 1, 2011

The six largest ancestry groups in Wisconsin are: German (42.6%), Irish (10.9%), Polish (9.3%), Norwegian (8.5%), English (6.5%), and Italian (6.1%).[45] German is the most common ancestry in every county in the state, except Menominee, Trempealeau and Vernon.  Wisconsin has the highest percentage of residents of Polish ancestry of any state.[45] The various ethnic groups settled in different areas of the state. Although Germans settled throughout the state, the largest concentration was in Milwaukee. Norwegians settled in lumbering and farming areas in the north and west. Small colonies of Belgians, Swiss, Finns and other groups settled in their particular areas, with Irish, Italian, and Polish immigrants settling primarily in urban areas.

The economy of Wisconsin is driven by manufacturing, agriculture, and health care.
Of note, in Wisconsin juveniles are nearly three times more likely than adults to be victims of sexual assault, with 11- to 15-year-old children as the highest victimized age group.

Ashland County (north center)
Ashland is named after the Ash tree. It is interesting to note however that according to Nahum Slouschz, the name AS or Ash was a Phoenician form for Asher.

Clark County (center west)
Eadsville
Reminds us of the legendary Aed ancestor of the Celtic British whose name is a form of Ad (Aed) in Jewish-Arabic lore who represented the Lost Ten Tribes.

Crawford County (southwest)
Rising Sun
The Rising Sun was a symbol for Reuben.

Dane County (south center)
Albion
Albion (Britain) is derived from Lebanon which belonged to the Israelite Tribe of Asher.
Dane
Dane from Dan.
Dunkirk
Dunkirk from Dan.
Mt Horeb
This is another name for Mount Sinai.

Dodge County (southeast)
Danville
Danville from Dan.
Jackson
Jackson from Jacob. Jacob applies to all Israel BUT it often has a particular application to Manasseh.
Lebanon
Old Lebanon
Lebanon is in the territory of Asher.

Door County (northeast)
Ellison Bay
Ellison short for Eli who was the High Priest officiating at the Tabenracle in Shiloh in the territory of Ephraim.
Ephraim
Ephraim son of Joseph.
Jacksonport
Jackson from Jacob, often linked with Manasseh.
Namur
Namir is Hebrew for leopard.

Grant County (southwest)
Annaton
Anna from Chana mother of Samuel from the Tribe of Levi.
Cassville

Cass was possibly an Edomite form of the name Esau.
Jamestown
James from Jacob.
Mount Ida
Ida is a form of Judah.  Places named Mt. Ida were also found on the Isle of  Crete as well as in the Troad (Troy) region of Anatolia. Nevertheless Josephus (Versus Apion) suggests that even in these cases the term Ida was originally a form of Judah.

Jefferson County (southeast center)
Ebenezer
Ebenezer (1-Samuel 4:1 in Modern Hebrew pronounced as Even-Ezer meaning the Plain (or Stone) of Help) was probably in the territory of Benjamin. It was the scene of an Israelite defeat by the Philsitines and capture of the Ark that had been taken from the Tabernacle in Shiloh (1-Samuel 4:1-2, 11). It was also the site where the men of Israel led by Samuel defeated the Philistines (1-Samuel 7:9-11).  We are told that Samuel set up a megalithic monument "and called its name Ebenezer, saying, 'Thus far the Lord has helped us' " (1-Samuel 7:12).
Hebron
Hebron was in Judah.
Rome
Rome was founded by Esau also known as Edom.

Lafayette County (southwest)
Avon
Avon was in Benjamin and also in Naphtali.

Menominee County (northeast)
Zoar
Zoar was in Judah and is associated with Lot father of Moab and Ammon.

Portage County (center)
Alban
Alban (Scotland) is derived from a term for Lebanon.
Juda
Juda is Judah.
Ellis
Ellis is from Eli.
Jordan
The Jordan River runs down the center of the southern part of the Land of Israel.

Racine County (southeast)
Caledonia
Caledonia is an area in Scotland but the appellation is derived from a dialectical form of the name Gilead.
Tabor
Mount Tabor is in the north of Israel. It is famous as the scene of battle of  the Prophetess Deborah and her chief of staff Barak versus Yavin (Jabin) king of Canaan and Sisera the head of his armies (Judges ch.4). It was on the border of three tribes: Zebulun, Issachar and Naphtali (Joshua 19:22).

Richland County (southeast)
Boaz
Boaz from Judah was the husband of Ruth and an ancestor of King David.
Jimtown
Jim is short for James which in turn is another form of Jacob.

Rock County (south center)
Avalon
Aval is the name of a place in Naphtali (Aval beth-Maaccha) and probably means a plain, i.e. a flat stretch of ground.
Avon
Avon was in Benjamin.
Evansville
Evansville from Even in Hebrew meaning stone or a straight area. The English word (like many English words) even comes from this source.

St. Croix County (west)
Erin Corner
Erin is another name for Ireland but it probably derives from Eran a clan of Ephraim.

Shawano County (east)
Adams Beach
Adam was the first man.
Almon
Almon in Hebrew means widower. It also means someone who is forsaken or left alone. The Ten Tribes (Israel) are assured that they not an alman.
Jeremiah 51:
5 For Israel is not forsaken [Hebrew: Alman], nor Judah,
By his God, the LORD of hosts,
Though their land was filled with sin against the Holy One of Israel.
Angelica
Angelica is from Angel.
Eland
Eland may be derived from the Hebrew "El" meaning God.

Vernon County (southwest)
Mount Tabor
Mount Tabor is in the north of Israel. It is famous as the scene of battle of  the Prophetess Deborah and her chief of staff Barak versus Yavin (Jabin) king of Canaan and Sisera the head of his armies (Judges ch.4). It was on the border of three tribes: Zebulun, Issachar and Naphtali (Joshua 19:22).

Walworth County (southeast)
Abells Corner
Abells is a form of Abel brother of Cain.
Adams
Adams was the first man.
Allens Grove
Allens is from Elon of the Tribe of Zebulon.
Lake Beulah
Beulah is a name applied to the Land of Israel at the time of Future Redemption.
Sharon
Sharon was a region in the west of Israel. It was mostly in the area of Ephraim.

Washburn County (northwest)
Sarona
Sarona is a form of Sharon.

Washington County (southeast)
Addison
Addison from Ada.
Allenton
from Elon of Zebulon.
Jackson
Jack is short for Jacob.
Saint Michaels
Michael was the Guardian Angel of Israel.
Young America
The name America derives from Ha-Macheri, Macher being the first-born son of Manasseh.

Waukesha County (southeast)
Bethesda
The Pool of Bethesda is mentioned in the NT as located in Jerusalem. The name is believed to be a pronunciation of the Hebrew Beth-Chesed i.e. House of Kindness.
Jericho
Jericho was in the territory of Benjamin.
Wales
Wales is named after the British god Bel which is a form of the Canaanite baal. See:
Origin of the Name "Wales".  A New Appreciation
http://www.britam.org/WalesName.html

Waupaca County (center east)
Baldwins Mill
Baldwin may derive from Bal, see Wales above.
Carmel
Mount Carmel was in the north in the region of the Tribe of Asher.
Evanswood
Evanswood from Even in Hebrew meaning stone or a straight area.
Scandinavia
Scandinavia was oriignally known as Skatanavia i.e. Land of the Scythians. Part of the Lost Ten Tribes confederated with the Scythians and were identified with them.

Winnebago County (center east)
Adella Beach
Allenville
Allenville from Elon of Zebulon.
Elo
Elo from El meaning God in Hebrew.
Medina Junction
In Hebrew Medina (Medinah) means capital city and/or country, or state.
Menasha
Menasha is a form of Mannasseh.
Omro
Omro reminds us of Omri King of Northern Israel. In Hebrew the vowels are often elastic and may interchange with each other.
Zion
Zion is another name for Jerusalem.

Wood County (center)
Bethel
Bethel was in Ephraim and in Benjamin.

TRIBAL ASSOCIATION OF ABOVE NAMES:
We found strong repeated links to Dan. Other Tribes that came up several times included Asher, Zebulon, Reuben, and Manasseh. Ephraim and Benjamin were also recalled.