Biblical Place Names in Wyoming and their Possible Significance 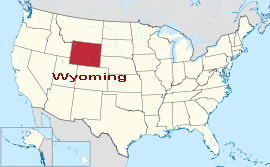 Wyoming has the least number of people and the second lowest population density of all US States. Wyoming seems to consist of mostly mountains and open ranges.

The economy is reasonably stable with grazing agriculture, mineral wealth, and tourism. 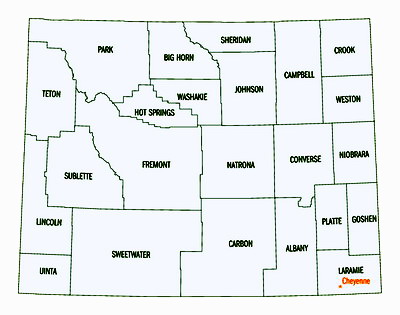 Counties (only those counties that have Biblical Place Names are listed below):

Albany County (southeast)
Albany is probably a form of Albion (Britain) or Alban (Scotland) both of which were named after Lebanon of the Tribe of Asher.

Campbell County (notheast)
Adon in Hebrew means "Lord". Joseph was referred to by his brothers as "Lord of the Land" (i.e. of Egypt).

Carbon County (south center)
Leo means lion. A lion is found in the symbolism of several Israelite Tribes e.g. Judah, Dan, Gad.
Milo in Hebrew means "filling". It is mentioned in the Bible (e.g. 2-Samuel 5:9) as part of Jerusalem. What exactly the intention was is not certain but since Jerusalem is built on hills it probably means a space that was filled in for the sake of settlement as occurred in several areas. There was also a House of Milo (Beth Millo) in the region of Manasseh in the vicinity of Schechem. Alternately Beth Milo may have been another name for Schechem. The Milesian rulers of Ireland may somehow have been connected to this group.

Judges 9: 6 And all the men of Shechem gathered together, all of Beth Millo, and they went and made Abimelech king beside the terebinth tree at the pillar that was in Shechem.

Converse County (east center)
Ammon neighbored Israel. Naamah the mother of King Rehoboam of Judah came from Ammon.
Esterbrook is named after Esther from the Tribe Benjamin.
Orin
Orin Junction: The name Orin could be derived from the Hebrew word "Or" meaning "light" or from "Oren" meaning pine tree.
Orpha was the companion of Ruth who like her was from Moab and had married a son of Noami and been widowed. Unlike Ruth however Orpha turned back and did not continue to accompany Noami when she returned to Judah. The name Orpha reminds us of the word "Oreph" in Hebrew meaning "back of the neck" (nape). Orpha turned her back on Redemption. In the Hebrew Bible, different names have a significance of their own.

Crook County (northeast)
Aladdin is the name of an Arab boy made famous by a popular fairy tale.
Alva in Hebrew means the white froth of waves.
Beulah is a name applied to Israel in the final Redemption (Isaiah 62:4). It means literally behusbanded.
Devils Tower reminds us of a darker side of existence.
Mona is a name said to be of Irish origin and short for Madonna. It is also used in modern day Israel as a girls name and perhaps has an alternative explanation.

Goshen County (southeast)
Named after Goshen in Egypt, place of sojourn of Israelites bequeathed through the influence of Joseph, later belonged to Judah,

Natrona County (center)
Allendale reminds of Elon a clan name in Zebulon and of the Alon meaning oak tree.
Evansville could derive from several different Biblical names. There was Beth-Aven in Benjamin and Aven beth-Maachah in Naphtali.

Sublette County (west center)
Daniel
Daniel Junction:  Daniel is the name of one of the sons of David and later of the prophet, Daniel in the Lions Den, who was also descended from David.
Temple Creek Summer Home Area reminds us of the Temple in Jerusalem.

Sweetwater County (southwest)
Eden was a place in northern Syria in the territory of Manasseh or of Â the Tribe of Asher.
James Town: The name James is a form of Jacob which is another name for Israel.

Uinta County (southwest)
Evanston. Evanston (like Evansville) could derive from several different Biblical names. There was Beth-Aven in Benjamin and Aven beth-Maachah in Naphtali.
Urie is short for Oriel (Uriel). Oriel (God is my light) is the name of an angel in Rabbinic Tradition. There was also Uriah the Hittite whose name means the same. There was also Uriah son of Shemaiah from Kiriath-jearim (Jermiah 26:2) in Judah on the border with Benjamin. One of the Priests in the time of Isaiah was also named Uriah (Isaiah 8:2).

Possible Biblical connotations show a connection to Joseph (including Manasseh), Asher, Judah, and Benjamin. The theme of Redemption also recurs.