The Tribe of Asher in Traditional Rabbinical Sources or works based on them. 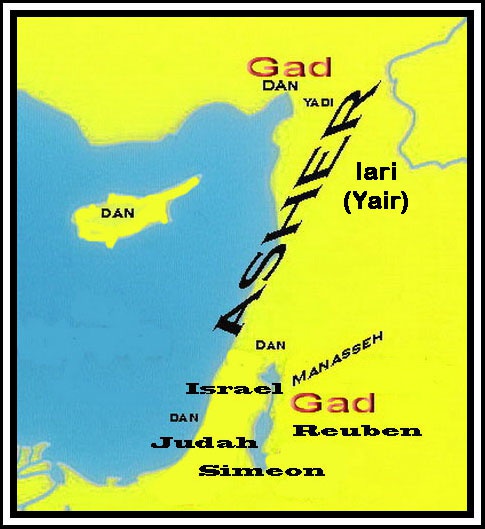 Abraham the first Hebrew begat Isaac. Isaac begat Jacob. Jacob was also known as Israel. Jacob married two sisters, Rachel and Leah.
From Leah Jacob begat Reuben, Simeon, and Levi, and after that Yehudah (Genesis 29:35).
Rachel, the sister of Leah, saw that for the moment she was not producing any children so she gave her handmaiden, Bilhah, to Jacob.
From Bilhah Jacob begat Dan and Naftali (Genesis 30:8).
After that Leah who also momentarily had stopped bearing, gave her handmaiden, Zilpah, to Jacob. From Zilpah Jacob begat two sons, Gad and Asher.

Genesis 30:
13 Then Leah said, 'I am happy, for the daughters will call me blessed.' So she called his name Asher.

At all events, we see from the above that Asher was the full brother of Gad through Jacob and their mother Zilpah the handmaiden of Leah.

Genesis 30:
13 Then Leah said, 'I am happy, for the daughters will call me blessed.' So she called his name Asher.

Genesis 49:
20 'Bread from Asher shall be rich, And he shall yield royal dainties.

Deuteronomy 33:
24 And of Asher he said: 'Asher is most blessed of sons; Let him be favored by his brothers, And let him dip his foot in oil.'

Asher was rich. His land was very fertile and brought forth bountiful produce of a superior type (Genesis 49:20).
Asher had the quality of being able to mix with common people yet maintain his distance and sophistication.
"Blessed among the sons is Asher yet he will be acceptable to his brothers" (Deuteronomy 33: 24).

In the word "Pri Tsadik" (Rabbi tsadok HaCohen from Lublin, Mamamarim Chodesh Sivan 6), "The Oral Torah has the ability to purify a person of all their sins."
This is symbolized by the olive oil of Asher.
Asher and the month Sivan (on which was given the Torah, Feast of Shevuot) and the Torah are inter-connected.
The Tribe of Asher were known for their olive oil and for their wisdom.
Just as the Afternoon Prayer (Minchah) is a bridge between day and evening so too the Tribe of Asher was able to  bring together contrary forces.
================

3. Lubavitcher Rabbi: High and Low Instinct in Unison, Rehabilitation and Rectification, Education of the Next Generation

The Land of Asher was overflowing with olive oil which is helpful for learning and memorizing (Igeret HaKodesh, A, 242).

Deuteronomy 33:24
And of Asher he said: 'Asher is most blessed of sons; Let him be favored by his brothers, And let him dip his foot in oil.'

The foot represents the lower instinct of a person whereas the oil symbolizes the height of wisdom. Asher was able to bring the two contradictory forces together.
Asher had the ability to serve the Almighty with his whole being and to subjugate all other needs to helping him fulfill that goal.

Asher was not exceptionally numerous in the number of his descendants but quality-wise he was blessed through them.

The expression  'Asher is most blessed of sons,' may mean not only that Asher is the mosty blessed among the sons (i.e. his brother tribes) but also that he will produce sons of his own and these will be blessed, in their good attributes.

Asher was part of the Camp of Dan i.e. Dan, Naphtali, Asher in the north, with Dan at the head. Asher preferred it this way instead of leading his own sub-section. He wished to partake in the task of Dan who would gather up the lost objects of the other Tribes and return them to their owners. This indicates an attitude towards wrongdoers of Rehabilitation and Rectification..

Asher emphasized the Education of the Next Generation. This is hinted at by the foot dipped in oil in the blessing of Moses to Asher.
===============
4. Victory of Spiritual Light over the Darkness

The Tribe of Asher had the ability to reveal the spiritual light hidden in the physical olive oil.
The oil used in the Temple was taken from the Tribe of Asher, so too, the  oil in  the Western  Lamp of the Menorah.
[This Western Light represents spiritual survival despite adversity.]

From the blessing of Moses we see that Asher had the aspect of the "foot," the last section of the body. Asher was born last out of the sons of the Maidservants of Jacob.
The oil of Asher is Linked to the Feast of Chanukhah which celebrates the victory of Spiritual Light over the Darkness.

Asher symbolizes the Divine Light reaching into the darker places.

Asher had the quality of making peace between the different Tribes and bringing them together.
Asher is connected with the name of Israel, "Yishuron."
[We have shown elsewhere that this in its turn indicates potentially great military prowess].

Olive oil has the quality of renewal and refreshing. The Tribe of Asher had something of this.

The wealth of the Tribe of Asher was a cause of temptation for them.

Pekach ben Ramaliyahu King of Israel was from the Tribe of Asher.
The Talmud describes him as a prodigious eater.

2-Kings 15:
24 Pekahiah the son of Menahem became king over Israel in Samaria....
25 Then Pekah the son of Remaliah, an officer of his, conspired against him and killed him in Samaria, in the citadel of the king's house, along with Argob and Arieh; and with him were fifty men of Gilead. He killed him and reigned in his place.

The Prophet Amos was from the Tribe of Asher (according to some, e.g. Abarbarbenal. Others disagree). Amos condemned excessive pleasure and indulgence.

The mother of Yonah the Prophet came from Asher.  Yonah prophesied against the cty of Nineveh in Assyria (Ashur). [The name for Assyria in Hebrew is "ASHUR" similar to that of ASHER. Perhaps there was to be somer king of association between the two as som,etimes happens when two different bodies have similar names?]

The Gentiles (Canaanite Phoenicians) of Sidon worshipped the ASHIRAH (goddess of the sacred tree) and Sidon was in the territory of the Tribe of Asher. [Here too, we find a similrity of name].

The name of Asher is similar to that of Ashur (Assyria).

The names Ashur (Assyria) and Ashirah indicate pride and the Tribe of Asher may also bear some of this.

The unique way of worshipping God adopted by Asher combines love and pleasure.
This is in contrast to that of Gad which involves abnegation and abnstinence, limitation.

For More Articles Concerning the Tribe of Asher see Asher.