The Vandals Moved to Ireland! 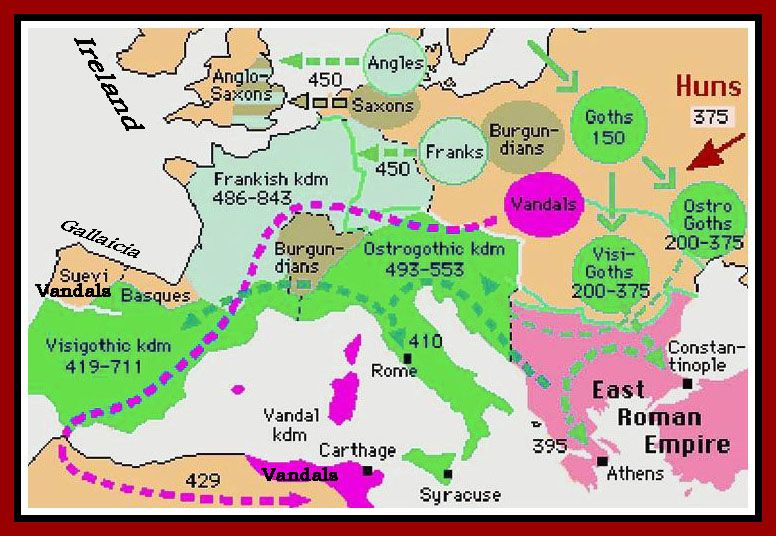 Source of Map (prior to adaptation): https://subratachak.wordpress.com/2017/09/16/migration-of-germanic-tribes/

THE VANDALS BECOME "AFRICANS"
We found descendants of the Tribe of Asher in several different regions and identifiable with various peoples. These included the Vandals who were also known as the Lygii. Their main divisions at the beginning were the Boreoi, the Omani, and the Heissi. These parallel the sons of Asher (Beriah, Yimnah, Ishuah, and Isui). These were once of a Celtic Culture but had received an overlay of Germanic-speaking structure. Other groups from Asher, such as the Veneti in Gaul and Britain, had also been subject to Celtic influence.   From the Vistula Region in present-day Eastern Poland the Vandals moved south and for a time were subject to the Romans in Pannonia (Hungary). In the 400's CE the Vandals participated in the Barbarian invasion of Roman Gaul and then in 409 penetrated Spain where Andalusia (Vandalusia) still bears their name. The Hasdinga Vandals, Siling Vandals, as well as Alans, and Suevi entered the area and reached an agreement with the local Roman rulers. The Alans received rulership over Lusitania (Portugal), the Siling Vandals received Baetica (a formerly Israelite area) in the south which henceforth was renamed in their honor "Andalusia" i.e. Vandalusia. The Hasdinga Vandals with some of the Suevi got Gallaecia in the northwest. Shorlty afterwards, the Vandals in Gallaecia fought wars with the Suevi and incoming Goths. They moved south to Baetica joining the Siling Vandals and then moved to North Africa. From North Africa the Vandals raided and plundered the city of Rome (Italy) in 445 CE. A tradition states that in their raid on Rome the Vandals "liberated" treasures taken from the Temple in Jerusalem that the Romans had destroyed in 66 CE. Some of the treasures were retaken by the eastern Roman Byzantines (who ruled from what is now Turkey) and may have been "liberated" again later by the Goths. The possibility also exists that part of the Temple treasure went with the Vandals to Ireland and then to Britain.
The East Roman Byzantines in 533 CE crushed the last vestiges of the Vandal kingdom in North Africa. Most of the Vandals however appear to have left the province of North Africa previously. At all events after their defeat, Procopius records that the entire Vandal nation took ship and sailed away.  In the Vandal period North Africa via Spain had been invaded by related groups such as the "Massagetae" (probably Nephtalites), Suebi, Franks, and others and these must have joined the Vandals and moved with them to Ireland and from there to Britain. [Zaharias P. THUNDY, 1998, traced the Mercian Saxons in England to remnants of this same mixed group in Spain!].
Meanwhile some of the Hasdinga Vandals in Gallaecia instead of going southward appear to have set sail for Ireland! Gallaecia (sometimes referred to as Galatia) had been a place of Israelite settlement from the earliest times. There were several migrations from Gallaecia to Ireland. The last of these was that of the Vandals who intermixed with the locals and followed their pathway across the sea. The "Book of the Invasions of Ireland" ("Leabhar Gabhala") appears to have conflated all these movements into one and accredited them to the Milesians. This is discussed by Manuel ALBERO and by LITTLETON/MALCOR. These scholars discuss whether references to the Milesians having come from Scythia before invading Ireland could not have originated from the Alans who had been part of the Vandals host.  This is a possibility but it was been raised mainly since the connection  between Scythia and the Vandals was not known to these learned savants. They were  aware only that the Alans did originally come from the Caucasus area. Since however the Vandals were the majority in Gallaicia and they also (as we have shown) came from Scythia then a Scythian connection is more likely to be descriptive of them.
Archaeology has revealed connections between Northwest Spain and Ireland from the earliest times. Both areas were dominated by Celtic culture as shown by similarities in place-names, language, fortifications. Just as Celtic Britain and Ireland received settlers from this region so too did migrants from Britain move there in the 400s CE. Similarities have been noticed between the folk-tales and legends of the region and those of Ireland. The Irish Chronicles speak of a tower in Gallaecia from which the Island of Ireland was visible. This tower still exists and has been dated to Roman times. The Irish sources tells us that when the Milesians came to Ireland they spoke the same tongue as the inhabitants who were already there. On the other hand there are also words in Irish indicating contact with the Greeks, Thracians, and others who bordered on the Scythian area. The Irish legends and archaeology indicate a series of migrations lasting over centuries from Gallaicia to Ireland. One of these evidently incorporated some of the Vandals. The movement of Vandals and local Celts from Gallaecia to Ireland would have taken place shortly before their fellow Vandals in North Africa also moved there. The two movements may have been connected and in a de facto sense even coordinated. A migration from North Africa to Ireland is not far-fetched. For centuries afterwards Barbary pirates from North Africa were wont to raid the coasts of Ireland and Britain in search of plunder and slaves.

Africans in  Ireland
Geoffrey of Monmouth (History of the Kings of Britain", ca. 1136) reported that 160,000 "Africans" from Ireland joined the Saxons in invading Britain. These so-called "Africans" may have been Vandals and kindred bands who had arrived after having previously sojourned in North Africa.  Other early inhabitants of Ireland, e.g. the Ancient Fomorians, according to some sources could also be referred to as Africans.

ALBERRO, Manuel. 'Milesians and Alans in the Northwest of the Iberian Peninsula and the Mythical Invasion of Ireland,' Proceedings of the Harvard Celtic Colloquium,Vol. 23 (2003).

LITTLETON/MALCOR. LITTLETON, C. Scott, and MALCOR, Linda A. "Did the Alans Reach Ireland? A Re-assessment of the Scythian References in  the Lebor Galala Erin," in GREPPIN, A., and POLME, E.  eds. "Studies in Honor of Jaaan Puhvel, Part Two. JIES, 21, 1997.

Bible Codes confirm the connection of the Tribe of Asher with Ireland. The name IRELAND  (vertical column) is intersected by YISRAEL  and adjoins the name ASHER. The name ASHER appears again just above that of Ireland and just above this second appearance of the name ASHER we find the name EIRE meaning Ireland. [At a sequence of 32. From Deuteronomy 1:37-40]. Other Code results confirm this and also link Ireland with Tarshish.