The Hebrew Calendar and the Tribe of Each Month

Contents:
Lunar Years with Solar Considerations.
The Hebrew Calendar in Western Terms.
Nissan the 7th Month becomes the First Month!
Judah and Numbering the Months. Prophecy Fulfilled.
How the Months are co-related with the Tribes.
^^^^^^^^^^^^^^^^

The Hebrew Calendar is a lunisolar calendar, meaning that months are based on lunar months, but years are based on solar years. The calendar year features twelve lunar months of twenty-nine or thirty days, with an intercalary lunar month added periodically to synchronize the twelve lunar cycles with the longer solar year. These extra months are added seven times every nineteen years. When an extra month is added the last month of the year, “ADAR,” is doubled giving as “ADAR-A” and “ADAR-B” or in Hebrew “Adar-Aleph” and “Adar-Beit.”

The beginning of each Jewish lunar month was originally based on the appearance of the new moon.  Although originally the new lunar crescent had to be observed and certified by witnesses,  the moment of the true new moon has now been approximated arithmetically. The Sages used the authority given them by the Torah (Deuteronomy ch. 17) to determine the calendar indefinitely.

The mean period of the lunar month (precisely, the synodic month) is very close to 29.5 days. Accordingly, the basic Hebrew Calendar year is one of twelve lunar months alternating between 29 and 30 days.

Concerning the Month of Nissan, Moses was told,  “This month shall be for you the head of months, the first of the months of the year” (Exodus 12:2). It is in this month that we celebrate the eight-day Feast of Pesach (Passover), from the 15th through the 22nd of Nissan. It is called “chodesh ha-aviv” i.e.  the Month of Spring.

Exodus 23:
15 You shall keep the Feast of Unleavened Bread; for seven days you are to eat unleavened bread, as I commanded you, at the appointed time in the month of Abib ["Abib" i.e. Aviv" means "Spring"], for in that month you came out of Egypt. And no one is to appear before Me empty-handed.

Nissan is the first month from the Religious Point of View (Exodus 12:2) though actually the 7th month according to the counting of months that had been held from the beginning. In the Hebrew Calendar it is still considered the Seventh Month.

When for instance, the Bible says,
# Then in the seventh month, on the seventeenth day of the month, the ark rested upon the mountains of Ararat # (Genesis 8:4), it means by the "seventh month" the month of Nissan.

When however the “seventh month” is referred to for religious purposes it means the 7th month counted from Nissan which is the month of Tishrei and considered the first month of the civil year, e.g.

Leviticus 16:
29 This shall be a permanent statute for you: in the seventh month, on the tenth day of the month, you shall humble yourselves and not do any work, whether the native, or the stranger who resides among you.

Here the intention is to Yom Kippur (the Day of Atonement) which occurs on the 10thy of Tishrei which is the first month of the Civil Year.

The months are recalled by their numbers in Prophecy: 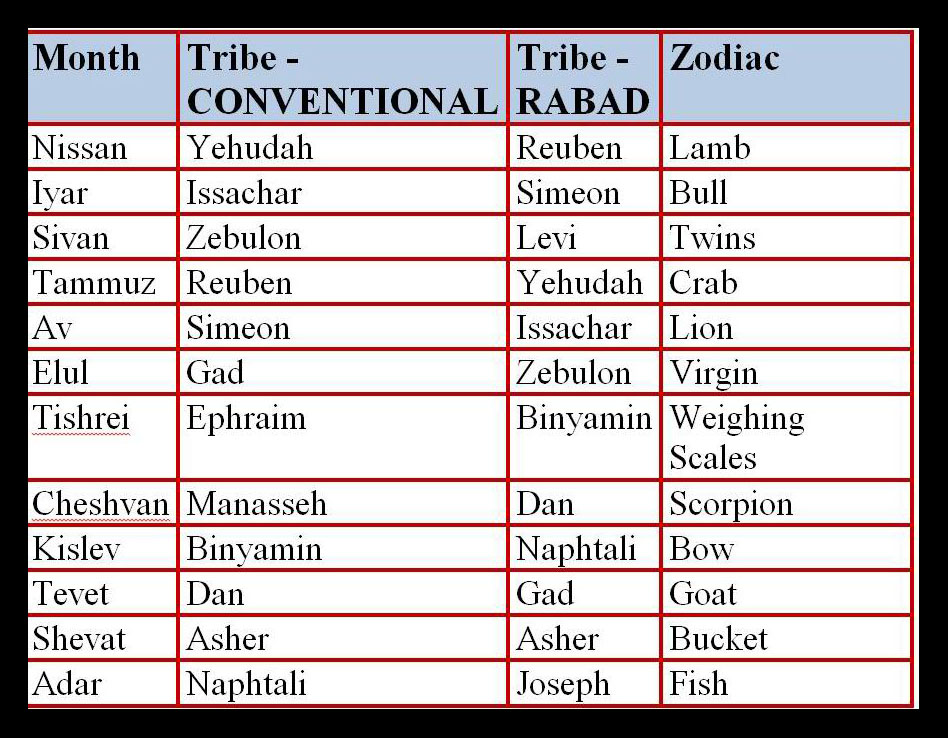 Note that the CONVENTIONAL listing begins with Judah on the right and proceeds in a clockwise direction according to the Encampment around the Tabernacle with Judah in the east leading issiachar and Zebulon (Numbers chapter 2), then goes to Reuben in the south who headed  Simeon and Gad; then goes to Ephraim inthe west who headed Manasseh and Benyamin; then goes to Dan in the North who headed Asher and Naphtali\. It counts Ephraim  and Manasseh as separate Tribes but does not include Levi.

How the Months are co-related with the Tribes accprdomg to the RABAD (pronounced "RIEBAD").

The RABAD Rabbi Abraham ben David (c. 1125 - 1198, Provence, France counts Levi and counts Joseph but does not number Ephraim  and Manasseh as separate Tribes  UNLESS there is a Leap Year with Two Months of Adar, Adar-A and Adar-B.  In such a case Adar-A becomes that of Ephraim and Adar-B that of Manasseh. He lists the sons of LEAH (Reuben, Simeon, Levi, Yehudah, Issachar, Zebulon), then  recalls BINYAMIN son of Rachael,  then Dan and Naphtali (sons of Bilhah, handmaiden of Rachel), then Gad and Asher sons of Zilphah (handmaiden of Leah), then Joseph son of Rachel.

The order of the RABAD is based on the listing of the Tribes when they came down to Egypt.

Exodus (NKJV) 1:
1 Now these are the names of the children of Israel who came to Egypt; each man and his household came with Jacob: 2 Reuben, Simeon, Levi, and Judah; 3 Issachar, Zebulun, and Benjamin; 4 Dan, Naphtali, Gad, and Asher. 5 All those who were descendants of Jacob were seventy persons (for Joseph was in Egypt already).

This explains the order given by the RABAD. This order seems to be that followed by most (or all) of the great Chasidic authorities, "Kedushat Levi," "Sefat Emet," "Bais Yisroel," :"Pri Tsadick," "Benai Issachar," etc.