Identifications with Modern Peoples in a Nutshell.

To see the sub-title captions press Watch on YouTube. 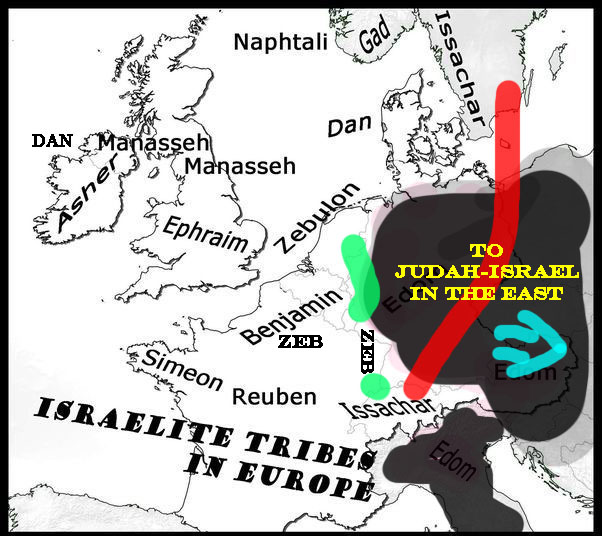 The Bible in Numbers chapter 2 describes the encampment of the Israelite Tribes  around the Tabernacle. The 12 Tribes are divided into 4 groups of 3. The arrangement of the Tribes to each other reflected to some degree their relative positions after inheriting the Land. It was also repeated in our time in the Israelite Tribes of Europe.
The Bible describes the encampment of the Tribes in a-clockwise direction. Judah, Issachar, and Zebulon, were in the east; followed by Reuben, Gad, and Simeon in the south. Then came Ephraim, Manasseh, and Benjamin in the west.
The last grouping mentioned was that in the north of Dan, Asher, and Naphtali.

Dan
Dan was to be found mainly in the Danes of Denmark. In Ireland the Tribe of Dana was to be found in the North. It had once sojourned in Scandinavia.
Ireland however pertains more to Asher. The Judge-Savior Samson came from Dan. The apparent good and bad traits of Samson are found in different ways among both the Danes and Irish.
The Danes of Denmark apparently like things to be correct, predictable, and organized. Agreements should be kept.
The name "Dan" in Hebrew connotes Judgment.
Samson according to the Midrash had a Danite father and a mother from Judah. The future Messiah will have a father from Judah and a mother from Dan.
Dan has a brooding nature and this too reflects the Danes of Denmark as depicted in the play "Hamlet' by William Shakespeare.

Asher
Asher was to be found among the Irish who also contain several other Israelite groups among them.
North Ireland was also from Asher but included elements from Ephraim, Manasseh, and Judah.
Asher also gave rise to the Vandals and these too came from Asher. In the area of Poland the Vandals had been known as Lygians and their groups were the Boreoi, the Omani, and the Heissi.These names are similar to those of the sons of Asher (Beriah, Jimnah, Ishuah, and Isui).    The name "Lygian" means “union”  the same as the name given to  Heber a forefather of one of the Milesian (Gaedhals) who conquered Ireland.
The Vandals moved to France and from there to Spain and North Africa.
From both Spain and North Africa there were movements of the Vandals to Ireland some of whom continued onward into Britain as allies of the Picts and Anglo-Saxons.
The name Asher in Hebrew  connotes happiness. Many of the Irish have an innate natural happy attitude. They are known all over the world for it. A friend of mine, when he was young, travelled to many different countries. What struck him most about the Irish was that they always seemed to be smiling.
There is even a famous song about it by Chauncey Olcott and George Graff, Jr., in the USA (1912), music by Ernest Ball.

"When Irish Eyes Are Smiling, sure 'tis like a morn in spring.
In the lilt of Irish laughter you can hear the angels sing."

Naphtali
Naphtali was to be found partly in Ireland.
The ancient capital of Ulster in North Ireland was known as 'Emain Macha.' In Ancient Israel "Abel-beth-Maacha" was a center of Naphtali (2-Kings 15:29).  The names 'Emain Macha' in Ireland and 'Abel-beth-Maacha' in Biblical Hebrew have virtually the same meaning!
Nevertheless, Naphtali was more predominant in Norway.
In the 400s CE Scandinavia was invaded by descendants of Dan and Naphtali though other groups of these Tribes had been there previously. The Naphtalites had been federated with the Huns and are sometimes referred to as Naphtalite Huns.
They were also known as Gaeli and as Kadussi after Kadesh-Naphtali (Judges 4:6) which had been their former center in the Land of Israel. The border between Norway and Russia is marked by a river known as the River of Jacob.

Dan, Asher, and Naphtali comprised the northern group. The Tribal characteristics of these Tribes as described in Rabbinic Literature fit the peoples identified. Norway was named after the Neuri. This name connotes the Hebrew word "Naar" meaning youth, apprentice, and reflecting an aspect of Norwegian character.

According to sources quoted by Fishel Mael, Naphtali was blessed with the attributes of inner happiness, alacrity, and being able to ASSOCIATE with others and bring them together.  The Norwegians have these qualities.

Petroleum nowadays supplies Norway with much of its wealth.  The petroleum industry accounts for around a quarter of the country's gross domestic product (GDP).
Petroleum in  Hebrew is "NeFT." The name Naphtali literally means "Petroleum [NaFT] from God [EL]!"

Naphtali was the son of Bilhah maidservant of Rachel. Jacob begat Naphtali from Bilhah after Rachel had given her to her husband.
Rachel was in a kind of competition with her sister, Leah, as to which of them could merit (directly or indirectly) to bless their mutual husband (Jacob) with male offspring.
When Naphtali was born it was a minor victory of Rachel so she said,

Genesis ()NIV) 30:
8 Then Rachel said, 'I have had a great struggle with my sister, and I have won.' So she named him Naphtali.

The name "Naphtali" is derived from the root "PTL" meaning to weave from which it was also applied to struggle: Wrestlers when they wrestle interlock their bodies together and twist around each other.

Despite this, since the name NAFTALI in Hebrew does have three letters NFT which do mean "petroleum" we can also interpret the name to have this secondary meaning.