The Eye above the Pyramid in the Great Seal of the USA. 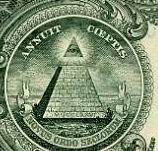 In previous articles and video clips and in our books we have discussed the Great Seal of the USA as depicted on an American dollar bill.

The US Dollar
Symbolism Identifies the USA with Israel, with Joseph, and with the Tribe of Manasseh
https://hebrewnations.com/articles/tribes/dlrsymbolism.html

God is the Shepherd of Israel
The Blessings of Jacob to Joseph Re-examined. Genesis 49:22-26 Retranslated
https://hebrewnations.com/articles/biblical-proof/joseph/shep.html

We noticed numerous points of Israelite Significance illustrated on the US Dollar, such as the repetition of the number 13 (stars, arrows, berries, stripes, etc) representing the 13 original constitutional States of the USA but also parallel to 13 Israelite Tribes, etc.
Also the Star of David configuration of the stars connotes an association with Judah and the House of David.
And so on.
A problem with some of our presentations might not that we lack sufficient evidence but rather too much of it!

In this short essay we have therefore decided to concentrate on two main points alone.

(1) The Pyramid as representative of Joseph.
(2) The Eye above the Pyramid as predicted in Prophecy concerning Joseph.


(a) The Pyramid as representative of Joseph. Sphinx a Spinx?

Each of the Tribes had its own Flag or Standard:

Numbers 2:
2 Everyone of the children of Israel shall camp by his own standard, beside the emblems of his father's house....

In addition to the emblems on the Tribal Standard each of the Tribes had its own precious stone on the Breastplate of the High Priest.

Exodus 28:
15 Fashion a breastpiece for making decisions, the work of skilled hands. ... 21 There are to be twelve stones, one for each of the names of the sons of Israel, each engraved like a seal with the name of one of the twelve tribes.

Previously we had the idea that when Joseph and Manasseh acted together they used the standard of Joseph with a picture of Egypt, and when they acted independently of each other Ephraim used the bull as its symbol, and Manasseh the RAEM (unicorn).

The only images that immediately conjure up  the idea of Egypt are the Pyramid and possibly the Sphinx of Giza.
The Pyramid however is more obviously Egyptian.

Someone (we have lost the source) once claimed that Britain also once had the equivalent of  the Great Seal in the shape of the Sphinx at Giza. We failed however to verify this or even find a reference to it when we searched.
A sphinx is a mythical creature with the head of a human and the body of a lion with the wings of a falcon.
The Great Sphinx of Giza... it stands on the Giza Plateau on the west bank of the Nile in Giza, Egypt.

# The original shape of the Sphinx [at Gaza was] cut from the bedrock, and has since been restored with layers of limestone blocks. It measures 73 m (240 ft) long from paw to tail, 20 m (66 ft) high from the base to the top of the head and 19 m (62 ft) wide at its rear haunches.[4] Its nose was broken off for unknown reasons between the 3rd and 10th centuries AD.
# The Sphinx is the oldest known monumental sculpture in Egypt and one of the most recognizable statues in the world. The archaeological evidence suggests that it was created by ancient Egyptians of the Old Kingdom during the reign of Khafre (c. 2558-2532 BC).

A statue of a sphinx was found at Colchester possibly in association with the remains of a Roman Temple. The Celtic-British Roman-influenced coins of Cunobelin (Colchester, Essex, east England) depict a sphinx. The Gentleman's Magazine, January 1822.

At all events the pyramid represents Egypt and it is found on the Great seal as illustrated on the dollar bill and universally representative of the USA.

This may alternatively be rendered:

Genesis 49:22
Ben Porat [son of fertility] Yoseph; ben porat [son of power], under the Eye; the daughters marched as one [towards or for the sake of] the bull

See Also:
God is the Shepherd of Israel
The Blessings of Jacob to Joseph Re-examined. Genesis 49:22-26 Retranslated
https://hebrewnations.com/articles/biblical-proof/joseph/shep.html

Re-translation:
Genesis 49:22
Ben Porat [son of fertility] Yoseph; ben porat [son of power], under the Eye; the daughters marched as one towards [for the sake of] the bull.

In the King James, "Ben Porat" is translated as "A FRUITFUL BOUGH":
In Hebrew "Ben Porat" can also mean "A Powerfully Fertile Son" or "A Son of Power".  Or both
"BY A WELL" in Hebrew: "ali ayin" which can also mean "eye above," or "under the eye."
"AYIN" in Hebrew means "eye." It can also indicate a natural spring but not a well.

The Hebrew text says "ali ayin" meaning literally "the eye above."
The Sages recognized this in the Talmud in 2 places. They said,

# Ali Ayin. Do not read [only] ali ayin [eye above] but [also] ooli ayin [above the eye] for over the seed of Joseph the evil eye does not prevail. (Talmud, Beracot 20;a).
# Ali Ayin. Eye Above. .. the eye that did not want to enjoy and feed on  what was not his (when Joseph refused to be seduced by the wife of Potiphar (Genesis 39:7-9) shall merit to enjoy as far as the eye can see. (Talmud, Zevachim 118;b).

From these two sources it is quite plain that the Sages understood the expression "ali ayin" at its simple immediate straightforward level to mean "Eye Above."

Genesis 49:22
Ben Porat [son of fertility] Yoseph; ben porat [son of power], under the Eye; the daughters marched as one towards [for the sake of] the bull.

We thus have a "Powerful Son" overseen by the Eye of Providence as depicted on the Great Seal of the USA overlooking the Pyramid (Picture of Egypt) symbol of Joseph ( Midrash Numbers Rabah 2;5).

The expression translated here as "towns and villages" in Hebrew is "banotayah" meaning literally "its daughters."

In the case of Joseph his "daughters" could therefore refer to his colonies of offshoots, and in the USA individual states.

Re-translation:
Genesis 49:22
Ben Porat [son of fertility] Yoseph; ben porat [son of power], under the Eye;  the colonies marched as one towards [for the sake of] the bull.

Other nations attached themselves of their own volition unto him.

The word "SHOR" (sometimes written as "SHUR") in Hebrew can mean "wall," or "bull" (Joseph, as well as Ephraim could be represented as a bull, Deuteronomy 33:17), or an area on the border of Egypt sometimes representing Egypt in general, or perhaps being Biblical Hebrew for a pyramid?

Shur (Bible)
From Wikipedia, the free encyclopedia
Shur, sometimes rendered in translations as Sur, is a location mentioned several times in the Hebrew Bible.
When Hagar ran away from Sarah (Abram's wife, her owner), "the Angel of the Lord found her ... by the fountain in the way to Shur" (Book of Genesis, Genesis 16:7, KJV).

Shur is also mentioned in -Samuel 15:7  "Then Saul slaughtered the Amalekites from Havilah all the way to Shur, east of Egypt." According to the Book of Exodus (Exodus 15:22-23), Marah is located in the "wilderness of Shur".

Easton's Bible Dictionary (1893) says that Shur is "a part, probably, of the Arabian desert, on the north-eastern border of Egypt, giving its name to a wilderness extending from Egypt toward Philistia (Gen. 16:7; 20:1; 25:18; Ex. 15:22). The name was probably given to it from the wall which the Egyptians built to defend their frontier on the north-east from the desert tribes. This wall or line of fortifications extended from Pelusium to Heliopolis."

This is how the verse is usually translated:

[Genesis 49:22] JOSEPH IS A FRUITFUL BRANCH , EVEN A  FRUITFUL  BRANCH  BY A SPRING; WHOSE BRANCHES RUN OVER THE WALL:

This may alternatively be rendered:

Genesis 49:22
Ben Porat [son of fertility] Yoseph; ben porat [son of power], under the Eye; the daughters-colonies marched as one [towards or for the sake of] the bull.

The bottom line is that:

The PYRAMID was the symbol of Joseph. The Pyramid is the symbol of the USA. Joseph was blessed that the EYE would be above him. On the Great seal the eye is above the pyramid.

We identify the English-speaking peoples as descendants of the Ten Tribes and especially of the two sons of Joseph, Ephraim and Manasseh.
In our times, drawing closer to the End Times, the USA especially embodies the forces and physical descendants of Joseph.
The USA is represented by a pyramid with an EYE above it.
This was the symbol of Joseph.