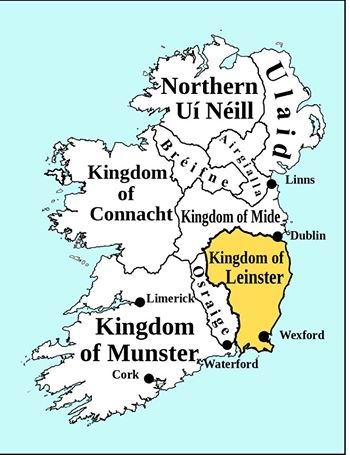 All accounts of Ireland relay the same message, mythical or historical. As each wave of claimed 'Israelite' origin  is beaten back by the newer wave the "Israelites" became contained in  Connacht in the West.

One older name for this area was Coiced Ol nEchmacht  occupied by the Fir Ol nEchmacht, or the "People of the Real God."

This was a non-fictitious ancient people named "Fir Bolg."  We are unearthing their graves and DNA is confirming our traditional teachings.  Three skeletons recently found under a pub confirm this was our people 3000 years ago, as they were both related to Canaanite and modern Irish populations. This pub was owned by Bertie and Currie in county Antrim and they dug up a tomb roof lintel while working.  Media accounts are plentiful with the details.

So we turn to the words left by the people for their input:
The names Connacht, Conn, Coinn, have all been given modern etymologies as the change from Middle Irish to Modern was made, however they are Middle Irish and older in origin.

The historical people are the Conmhaicne.
The suggested meaning of this name and other cognate to it relate to the hero  'Conn of One Hundred Battles.' A close inspection however reveals that these and related terms predate the famous ruler by a few centuries, so they could not be named after him.

The Proper etymology of the ethnonyms break down as such:

This clan was known as Muintir Ghoillagain or  "The Men of the Minister's Servants." This was a small clan   Three families of its ranks pertain to our research, the O' Coinn, the MacLeavy, and the O' Ferrell families.

A keen eye will quickly spot the superficial likenesses. A deeper delve will reveal an all too familiar system of social structure.

O'Ferrall or grandsons of Fir EL, (Grandsons of the men of El, i.e. God in Hebrew)

The Irish prefix O' = "grandson of" (middle and modern Irish).

The O'Ferrell were the ruling family of the Muintir Ghoillagain with whom we are occupied.

O Coinn or "Grandsons of Priesthood.  O'Cohen was an Anglicized later adopted spelling.

These are the Kohanim of Israel, i.e. Priests descendants of Aharon brother of Moses (Exodus 28:1, 41, etc.). Their identity is barely hidden under names almost identical to the Hebrew original, e.g. Levi being changed to MacLeavy. Their identities were concealed in plain view! The Kohanim were part of the Israelite Tribe of Levi.

Members of these groups were mostly unlikely to marry outside their tribe just as the Cohens (Kohanim) in Israel remained endogamous, to protect the genetic trait.
Their heraldry is that of a heavenly horse, whose marking trait is being able to exist in this world but still visit heaven. This is a hint as to the role of the Kohanim.
The name "MacLeavy" indicate "Sons of Levites, " again the correspondence is so poorly hidden, so obvious - that nobody sees it! Only the confounding of minds holds the secret back .......

So using the old Irish clan system, we may classify people by their different groups and subgroups:

O' Coinn  from the lineage of the Kohanim, 'highest duties in the tribes calling.'

MacLeavy  - sons of Levites or their descendants.

Add all these to the fact that historians of the past have made claims that the  Conmhaicne were allegedly non-Goidelic or not Gaelic in origin.

We still have a very compelling lineage saying the same thing for centuries.

Forced west, the oldest story overlooked
Successive waves of the oldest thoughts and theologies on earth driven to contain itself in one area on the most hidden western part of the Ancient World.