Did Simeon go with the Ten Tribes or Remain with Judah?

Adapted from:
Shouldn’t be there 9 lost tribes, instead of 10? Is the Simeon tribe really lost?
https://www.quora.com/Shouldn-t-be-there-9-lost-tribes-instead-of-10-Is-the-Simeon-tribe-really-lost/answer/Yair-Davidiy
Contents:
1. Introduction
2. Rabbi Fishel Mael : Simeon Remained with Judah. The Tribe of Manasseh divided into two halves and were counted as two separate Tribes!
3. The Brit-Am Opinion
4. Proofs that Simeon was Exiled with the Ten Tribes
5. Archaeological Evidence
6. Conclusion 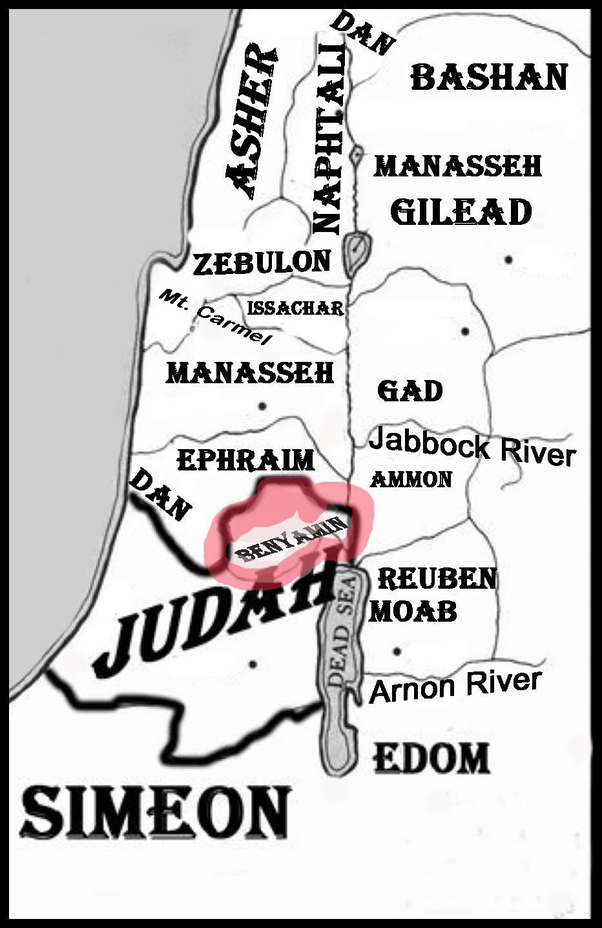 The Tribe Simeon was to the south of Judah and often considered as incorporated with it. Did the Tribe of Simeon go into Exile with the Northern Tribes who were exiled by Assyria or did Simeon remain in the south within the confines of Judah? Without Simeon there would have been only nine Tribes in the Northern Kingdom of Israel i.e. Reuben, Gad, Manasseh, Ephraim, Asher, Issachar, and Zebulon, Dan, and Napthali.

The Bible gives different aspects of the case concerning Simeon. We understand that the northern Ten Tribes included most of Simeon even though Simeon was in the south.

There are those who disagree. They say that Simeon was swallowed up by Judah and is included with Judah.

2. Rabbi Fishel Mael : Simeon Remained with Judah. The Tribe of Manasseh divided into two halves and were counted as two separate Tribes!

Rabbi Fishel Mael also says the Tribe of Simeon became absorbed by Judah. He says there nevertheless there were still 10 Tribes in the north since the Tribe of Manasseh was divided into two and counted as two separate Tribes. See: Which Tribes? - Hebrew Nations

Rabbi Fishel Mael ("SHIVTEI YISRAEL" [Hebrew Language], "The Twelve Tribes of Israel. An Anthology and Novellae Based on Biblical, Talmudic, and Midrashic Sources," Baltimore, MD, USA, 5757/1997) adduces the fact that the Tribe of Manasseh was in effect divided into two. One half was west of the Jordan ("Cisjordan") while the other was east of the Jordan ("Transjordan") and more to the north. The second half of Manasseh east of the Jordan is referred to in the Bible as the "half-Tribe of Manasseh" (e.g. Joshua 1:12, 4:12, 12:16, 13:7, 29, 22:1,7, etc, 1-Chronicles 5:23, 26, etc.). This half-Tribe was dominated by descendants of Machir the first-born son of Manasseh (Joshua 17:1). Rabbi Fishel Mael quotes sources that the two halves of Manasseh were different in character from each other and were each counted as separate Tribes in their own right. This opinion is also that adopted by some of the present-day non-traditional Academic commentators on the Bible.

In effect Rabbi Fishel says that the Ten Tribes were Reuben, Simeon, Issachar, Zebulon, Gad, Asher, Dan, Naphtali, Manasseh in the west; the half-Tribe of Manasseh in the east. He quotes, the "Maharsha" (Rabbi Shmuel Eidels 1555 - 1631, Poland, on the Talmud, Sota, 70;a) who in effect says that Simeon remained with Judah.

The Bible says that Simeon had been absorbed by Judah.

We also find in Rabbinical Tradition that quite a few descendants of Simeon were to be found among the Jews. One opinion says that Simeon among the Jews (of Judah) comprised the Teachers of Children, the Scribes, and the indigent poor (Midrash Breishit Rabah 88:10, Rashi on Genesis 49:7).

NEVERTHELESS, our understanding of Mainstream Rabbinical Opinion and the overall Biblical Message is that:

The two halves of Manasseh were counted together as one Tribe, not two. The Kingdom of Judah originally included mainly only Judah and Benjamin. Later they were joined by most of Levi and minority representative elements from the others. A good portion of Simeon may have also remained with Judah but most of Simeon  was exiled with the Ten Tribes and is counted as part of it.

4. Proofs that Simeon was Exiled with the Ten Tribes

The Tribe of Simeon had been located south of Judah. Simeon is listed among the Tribal territories whose inhabitants had been exiled and which King Josiah of Judah later purified (2-Chronicles 34:6). See: Tribal Clans: Simeon

The Bible says that there were Ten Tribes (1-Kings 11:35) who came to comprise the Northern Kingdom whose inhabitants were later exiled by Assyria.

Nachmanides (i.e. "Ramban" [Rabbi Moshe ben Nachman] 1194-1270) in the “Book of Redemption” ("Sefer Ha-Geulah" part one) points out that none of the Ten Tribes, including those from Simeon, are recorded as returning with the Jews from Babylon:

# Behold I will recall a matter that is expressly mentioned many times in Scripture. It is known that with the Return of the Exiles under Ezra only the Tribes of Judah and Benjamin returned. These had been exiled to Babylon by Nebuchadnezzar….

# There was no Redemption for the Ten Tribes who remained in exile.

# It has been made quite clear from our study that the only ones who returned from the Babylonian Exile were they who belonged to the Kingdom of Judah. Those however who are termed the House of Ephraim, or The House of Israel, meaning the Ten Tribes are still in Exile in Assyria. These Tribes did not have any participants in the Second Redemption, as I have noted...

# The Ten Tribes had already been exiled and they are still in Exile, in the area of the Canaanites, even unto Zaraphath:

'And this first exile of the children of Israel who are [now] from Canaan unto Zaraphath' [Obadiah 1:20].

# These places are at the extremes of the north. ...

Note: Nachmanides also quotes the Midrash Seder Olam to the effect that a large number of refugees from the Northern Tribes (comprising about 20% of the total later population of Judah) did in some way or other gravitate to Judah. They may have been many from Simeon among them. Nachmanides explains that they were not mentioned in the Census of Ezra and Nehemiah since their destiny as Distinct Tribes was to be realized among the Exiled Ten Tribes more than in Judah. 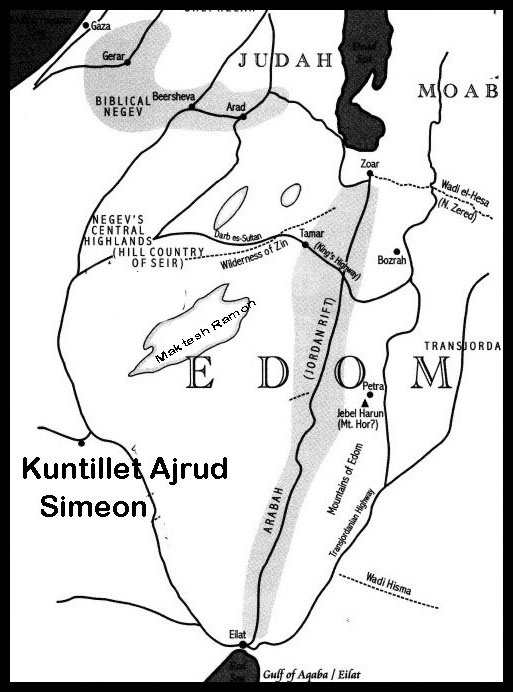 Archaeological evidence indicates that Simeon had been under the hegemony of the northern Kingdom. Kuntillet Ajrud is a site in the Northern Sinai. We associate the site with the Tribe of Simeon. Archaeological findings show that this site was culturally and apparently also politically associated with the northern Kingdom of Samaria of the Ten Tribes. It may have been ruled from Samaria. The archaeological finds are consistent with a provenance from northern Israel. See: Kuntillet Ajrud - Wikipedia

Midrashim such as Seder Olam (quoted by Abarbanel) also say the Tribe of Simeon was exiled around the same time as the Northern Tribes though separately from them. See: Baal - Hebrew Nations

Concerning Simeon we are told:

1-Chronicles 4: 40 They found rich and good pasture, and the land was broad and quiet and peaceful; for those who lived there formerly were Hamites. 41 These, recorded by name, came in the days of Hezekiah king of Judah, and attacked their tents and the Meunites who were found there, and destroyed them utterly to this day, and lived in their place, because there was pasture there for their flocks. 42 From them, from the sons of Simeon, five hundred men went to Mount Seir, with Pelatiah, Neariah, Rephaiah and Uzziel, the sons of Ishi, as their leaders. 43 They destroyed the remnant of the Amalekites who escaped, and have lived there to this day.

Here we have two different movements of Migration of Simeon during the reign of Hezekiah of Judah which overlapped the Final Stage in the Exile of the Ten Tribes. First one group moved moved eastward. Then another group separated from them and went to the north. Apart from Mount Seir in the south there was another area called by the same name in the region of Armenia. The Exiles of Simeon went there and later moved further northward. They became the Khazars. The leaders of Simeon who led their followers to Mojnt Seir are here listed as "Pelatiah, Neariah, Rephaiah and Uzziel, the sons of Ishi."

The Talmud (Baba Batra 123;a) considers "the sons of Ishi" who were the leaders of Simeon to be descended from Ishi who is listed later among Princes of half-Manasseh east of the Jordan, "Epher, Ishi, Eliel, Azriel, Jeremiah, Hodaviah and Jahdiel" (1-Chronicles 5:23-26). These were taken into Exile by the Assyrians. The Talmud says that the particular branch of Simeon who moved east and northwards accepted the rulership of the House of Ishi of Manasseh over them.

The Tribe of Simeon who were taken into Exile was to be scattered throughout the Ten Tribes. They who were led by Princes of Ishi of half-Manasseh, according to Jewish and Khazar traditions (see Eldad HaDani and other sources), created the core population of the Khazar people.

We thus find that there really were 10 full Tribes who were exiled by the Assyrians. The Bible said there would be 10 Tribes (1-Kings 11:35). The Tribe of Simeon was listed among the desolated lands of the Tribes that King Josiah purified.

2-Chronicles (NASB) 34: 6 In the cities of Manasseh, Ephraim, Simeon, even as far as Naphtali, in their surrounding ruins.

1. No-one from Simeon, as pointed out by Nachmanides, is mentioned in the Census Lists found in the Books of Ezra and Nehemiah among those returning with the Jews from Babylon.

2. Archaeological and other findings indicate that Simeon had been ruled by the Northern Kingdom of the Ten Tribes from Samaria even though it was in the south

3. Biblical evidence indicates that at least a portion of Simeon separated themselves from the others.

4. The Talmud and Midtrashim count at least a portion of Simeon as being exiled with the Ten Tribes.

5. The Khazars, who converted to Judaism, claimed descent especially from Simeon in addition to other Tribes.

It follows that Ten Full Tribes were exiled and the Tribe of Simeon was one of them.