Bah... You missed out Leicestershire (a whopping 62% are HG R-M269
according to Balaresque et al).

Despite it's vanishingly small Jewish population Leicestershire has
been represented in Parliament by quite a few Jewish politicians,
including:

I don't know what the percentage of HG R-M269 means in terms of the
LTTs, but it probably makes Leicestershire one of the most Celtic
places in Eastern England.
====
====
3. Hanah Hawkins and mtDNA K
"Hawkins, Hanah"Â  wrote:

Hi,
I am a Jewish convert (Orthodox through a Beis Din).Â Â  I have been connected with the Jewish people since I was in my 20s (I am 58 now).
Â
I had a DNA test done a while back in hopes that a Jewish lineage would be found through my mother (female cannot be tested for father's side), and no Jewish heritage was found.Â Â  My Haplogroup is K, and I have ancestry from UK area, Scotland, Italy, Belgium, Germany,Â  may be a few more areas that I have forgotten (there was a smorgasbord of a list : ).Â Â Â  If I remember correctly, the largest area was Scotland.
Â
I was reading one of your articles regarding Haplogroups, Â I guess Â K Â isn't included in the Jewish DNA (I am still grabbing at straws to have just a drop of Jewish ancestry : )
Â
I really hope your views are correct, Â it would be great if the lost tribes (whoever they/we are) would join up with Judah and return to the Torah.Â Â  Oh, and that would also mean that Mashiach would be here!!Â Â  Woo Hoo!!
Â
Thanks!!Â
Chana Rivka Bas Avarham/Sarah
(proud to be a convert and connected with the Jewish people!)Â
Â

Female mtDNA haplogroup K is very strong amongst Ashkenazic Jews and also found in other near Eastern populations.


Haplogroup K (mtDNA)
From Wikipedia, the free encyclopedia
http://en.wikipedia.org/wiki/Haplogroup_K_(mtDNA)
Haplogroup K appears in West Eurasia, North Africa, and South Asia and in populations with such an ancestry. Overall mtDNA Haplogroup K is found in about 6% of the population of Europe and the Near East, but it is more common in certain of these populations. Approximately 16% of the Druze of Syria, Lebanon, Israel, and Jordan, belong to haplogroup K. It was also found in a significant group of Palestinian Arabs.[5] K reaches a level of 17% in Kurdistan.[6]

K is closly related to HV which with its offshoots (H and V) covers most of Europe.

In our article on mtDNA we overlooked a discussion of mtDNA.

Concerning DNA in general we know very little.
We do however understand that environmental influence does play a part.
The Creator made biological beings with an in inbuilt ability to adapt and change according to circumstance and then to transmit those changes through heredity.
DNA is part of this.
Where heredity begins and environment ends etc however is the question.
DNA definitely can tell us something but how much beyond the relatively recent past is not clear.

====
====
5. Hungarians are Mainly Germans!
Historical Changes in the Population of Hungary
Slumbery said...
This is a good example of what you talking about in general actually. Because of the Turkish invasion, most of the population of the area of the current Hungary was replaced. I am quite sure that the population of (current) Central and Eastern Hungary around 1800 has less than 50% ancestry from the population of the same area around 1500.

Generally it is a common knowledge in Hungary (for those who are interested).

Just a tiny example of the first: there is a before-after map in one of my history atlases that show the settlements of the closer central Hungary before the Turkish war and after it. The "after" part is colour coded based on the ethnicity of each settlement. There is no comment in the atlas, but this pair of maps show that about 80% of the settlements were downright obliterated (especially the smaller ones) and in the 18th century Hungarians were clearly a minority in the area where the modern Budapest is. In this particular area most of the new settlers were Germans but Slovakians and Serbians are also significant. Southwest from this area Croatian elements start to dominate, mixed with Germans.Â
====
====
6. R1b amongst Bronze Age Bell Beaker People? A ControversialÂ  Claim.

Lee et al. (May 2012) analysed the ancient DNA of human remains from the Late Neolithic Bell Beaker site of Kromsdorf, Germany identifying two males as belonging to the Y haplogroup R1b.[15] Analysis of ancient Y DNA from the remains of populations derived from early Neolithic settlements such as the Mediterranean Cardium and Central and North European LBK settlements have found an absence of males belonging to haplogroup R1b.[16][17]
====
====
7. Native Americans and Northern Europeans More Closely Related Than Previously Thought
http://www.sciencedaily.com/releases/2012/11/121130151606.htm
Extracts:

ScienceDaily (Nov. 30, 2012) Using genetic analyses, scientists have discovered that Northern European populations -- including British, Scandinavians, French, and some Eastern Europeans -- descend from a mixture of two very different ancestral populations, and one of these populations is related to Native Americans. This discovery helps fill gaps in scientific understanding of both Native American and Northern European ancestry, while providing an explanation for some genetic similarities among what would otherwise seem to be very divergent groups.

The statistical tools for analyzing population mixture were developed by Patterson and presented in a systematic way in the report. These tools are the same ones used in previous discoveries showing that Indian populations are admixed between two highly diverged ancestral populations and showing that Neanderthals contributed one to four percent of the ancestry of present-day Europeans.
====
====
8. Genetic Makeup of Hispanic/Latino Americans Influenced by Native American, European and African-American Ancestries
http://www.sciencedaily.com/releases/2010/05/100503161421.htm
Extracts:
ScienceDaily (May 31, 2010) Â A new study from researchers at NYU Langone Medical Center found that the imprint of European colonialism and imperialism is evident in the genetic makeup of today's Hispanic/Latino American populations. Scientists discovered that Europeans, Native Americans, as well as West Africans brought to the U.S. and Latin America by the trans-Atlantic slave trade, have influenced the genes of the current Hispanic/Latino populations. However, a large variation in genes among individuals within each population were still found to exist.

....Currently, Hispanic/Latino Americans comprise 15.4% of the total United States population, or 46.9 million people, and account for the largest ethnic minority in the United States.

Through their analysis of the entire genome, the researchers found evidence of a significant sex bias consistent with the disproportionate contribution of European male and Native American female ancestry to present day populations. The scientists also found that the patterns of genes in the Hispanic/Latino populations were impacted by proximity to the African slave trade. In fact, Puerto Ricans, Dominicans and Columbians from the Caribbean coast had higher proportions of African ancestry, while Mexicans and Ecuadorians showed the lowest level of African ancestry and the highest Native American ancestry.

European migrant contributors were mostly from the Iberian Peninsula and Southern Europe. Evidence was also found for Middle Eastern and North African ancestry, reflecting the Moorish and Jewish (as well as European) origins of the Iberian populations at the time of colonization of the New World. The Native Americans that most influenced the Hispanic/Latino populations were primarily from local indigenous populations.
====
====
9. New Results? Alternate DNA.Â  27% of Finnish from East Mediterranean? 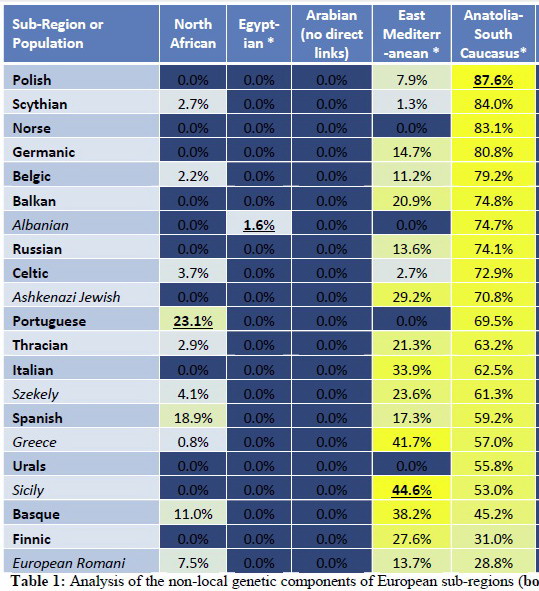