Publications that describe the composition of the human Y-DNA haplogroup in different ethnic or linguistic groups and geographic regions provide no explicit explanation of the distribution of human paternal lineages in relation to specific ecological conditions. Our research attempts to address this topic for the Caucasus, a geographic region that encompasses a relatively small area but harbors high linguistic, ethnic, and Y-DNA haplogroup diversity. We genotyped 224 men that identified themselves as ethnic Georgian for 23 Y-chromosome short tandem-repeat markers and assigned them to their geographic places of origin. The genotyped data were supplemented with published data on haplogroup composition and location of other ethnic groups of the Caucasus. We used multivariate statistical methods to see if linguistics, climate, and landscape accounted for geographical differences in frequencies of the Y-DNA haplogroups G2, R1a, R1b, J1, and J2. The analysis showed significant associations of (1) G2 with well-forested mountains, (2) J2 with warm areas or poorly forested mountains, and (3) J1 with poorly forested mountains. R1b showed no association with environment. Haplogroups J1 and R1a were significantly associated with Daghestanian and Kipchak speakers, respectively, but the other haplogroups showed no such simple associations with languages. Climate and landscape in the context of competition over productive areas among different paternal lineages, arriving in the Caucasus in different times, have played an important role in shaping the present-day spatial distribution of patrilineages in the Caucasus. This spatial pattern had formed before linguistic subdivisions were finally shaped, probably in the Neolithic to Bronze Age. Later historical turmoil had little influence on the patrilineage composition and spatial distribution. Based on our results, the scenario of postglacial expansions of humans and their languages to the Caucasus from the Middle East, western Eurasia, and the East European Plain is plausible.

Updated Mail-order genetic testing kits, which are all the rage right now, have been put through their paces by identical twins, and the results are a little baffling.
These test kits collect your DNA, typically by you spitting into a tube, and then you have to send the package back to the manufacturers for analysis. The results are shared electronically when ready.
To check out the accuracy of these test kits, Charlsie Agro...  and her identical twin sister Carly used them to submit their DNA to five separate consumer-grade genetic-testing outfits, and compared their results.

And their results were surprisingly varied. For one thing, the tests couldn't agree on where exactly their ancestors actually physically came from. ...
Two of the tests reported that the twins had no Middle Eastern ancestry, while the three others did, with FamilyTreeDNA saying 13 per cent of their sample matched with the region.

On top of this, each test couldn't quite agree on the percentages between the sisters, which is odd because the twins share a single genetic profile. In other words, each of the tests should have come back exactly the same for the pair. From 23andMe, though, Carly's result stated she is 13 per cent broadly European, while Charlsie was said to be just three per cent.

"Despite having virtually identical DNA, the twins did not receive matching results from any of the companies," the investigative team noted in their report this week.

"In most cases, the results from the same company traced each sister's ancestry to the same parts of the world,  albeit by varying percentages," they added. We note that, according to their family, the sisters' ancestors hailed from Sicily, Poland, and Ukraine.

The discrepancies may stem from a lack of proper testing. A DNA sample is typically made up of around three billion base pairs, though off-the-shelf gene kit testers usually only look at around 700,000. And each test kit maker probably uses their own proprietary software and datasets to determine someone's ancestry from their genes.

Talking of DNA, I recently read that 75% of British DNA can be traced
back to before the arrival of the so-called Celts (Gaels and Britons) in
these isles (link:
https://pintsofhistory.com/2014/09/22/the-english-are-celtic-or-something/).
How does that affect Brit Am's identification of the British people with
the tribes of Jpseph?  Could the first wave have been Israelites moving
up from Spain or does it reflect a non Israelite component (ignoring the
7.5K latest date of arrival for the moment)? 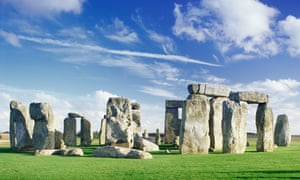 During the building of Stonehenge, around 2500BC, gene records show Stone Age Britons were replaced by Bronze Age Beaker folk.

The men and women who built Stonehenge left an indelible mark on the British landscape. However, researchers have discovered that their impact on other aspects of the nation may have been less impressive. In particular, their input into Britain's gene pool appears to have fizzled out, having been terminated by light-skinned Bronze Age invaders who arrived just as Ancient Britons were midway through their great Stone Age project. In the end, these newcomers may have completely replaced the people who were building Stonehenge.

This startling conclusion is the result of a huge gene study of humans in prehistoric Europe. It shows that around 2500 BC,  when the main sections of Stonehenge were under construction, a race of people known to archaeologists as the Beaker folk arrived in Britain. Their genetic profiles were similar to individuals who were living in the Netherlands at the time. In just a short period, all genetic traces of early Stone Age Britons were replaced by those from these continental newcomers, although work on Stonehenge continued.

'It is very striking. There seems to have been a complete replacement of the original folk of Britain with these newcomers,' said Garrett Hellenthal, a statistical geneticist based at University College London. 'Normally you get some older DNA surviving with a wave of immigrants, even a fairly large wave. But you don't see that in this case. Frankly it looks more like an invasion.'

The arrival and spread of the Beaker folk is one of the most intriguing puzzles of European prehistory. These people made complex, very distinctive ornaments in silver and gold and constructed distinctive bell-shaped pots or beakers from which they get their name. 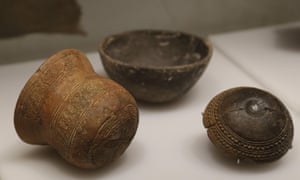 Around 4,500 years ago, this distinctive style of pottery suddenly appeared in the archaeological record and spread across Europe before arriving in Britain.

The study was one of the largest ancient genome analyses ever undertaken. Led by Inigo Olalde and David Reich of Harvard Medical School, it involved more than 100 scientists working at several dozen research centres in different countries and included analyses of more than a million pieces of DNA taken from remains found at burial sites of people who had lived across Europe between 4700BC and 1200BC. The results were startling.

'Essentially, two different patterns were discovered,' said archaeologist Marc Vander Linden, of University College London. In continental Europe, when Beaker artefacts appear in the archaeological record there is no change in the DNA profiles from the remains of people who lived then. There was no replacement. 'In Europe, it was the pots,  and other fashionable artefacts that moved, not the people,' added Linden. In other words, Beaker artefacts spread across the continent as an idea or fashion, or cultural craze.

But there was an exception. In Britain, the arrival of Beaker pots and artefacts was very different. It coincided exactly with the disappearance of the genetic signatures of the Stone Age people who had been living there. This was replaced with DNA associated with a group of Beaker users who have been traced to a region in the modern Netherlands. In other words, Beaker artefacts appeared not as an exported fashion, but as items carried by waves of immigrants or by people carrying out an invasion. Once in Britain, these incomers, bearing Beaker items, replaced the Stone Age people who had been living there. Whether this was a violent takeover is unclear. No evidence of battles has ever been found.

Nevertheless this replacement is definitely surprising, Pontus Skoglund, a Harvard Medical School geneticist, says in this week's Nature. It suggests the Stone Age farmers who were building Stonehenge were abruptly elbowed out by Beaker folk invaders. 'The people who built Stonehenge probably did not contribute any ancestry to later people or, if they did, it was very little,' Skoglund states. However, Durham University archaeologist Ben Roberts sounded a note of caution.' There is no doubt that ancient DNA studies are redefining our prehistory, but this work is based on a fairly small sample.

'The conclusion that there was almost complete replacement of DNA at this time is pushing the data a bit too far. However, this has certainly triggered a renewed debate about the Beaker. We just need more data.'

This point was backed by Linden. 'This apparent replacement is very striking, but it is possible our results are being skewed. In particular, the introduction of cremation at this time could have destroyed bones that would otherwise have provided DNA samples and which could change results. This is certainly not the end of the story.'