You asked for the weirdest examples of natural selection, not the weirdest resulting creature. So, here are some related examples that I thought were interesting when I first heard about them.

You may have heard about cane toads in Australia. 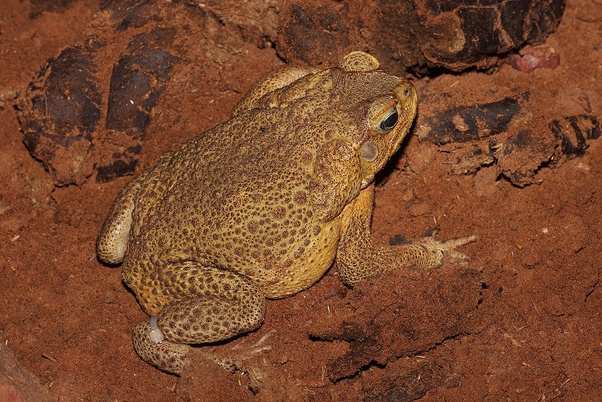 ABOVE: Cane Toad in Tanamai desert in Australia
SOURCE: Wikipedia

They're a classic example of an introduced animal turning into an invasive species. They're native to Central and South America, and were first brought to Australia in the 1930s. The plan was for the toads to eat beetle grubs that were eating the crop at sugar plantations. Well, cane toads are themselves poisonous, and none of Australia's predators were adapted to eating them, so the cane toads spread, and spread, and spread. 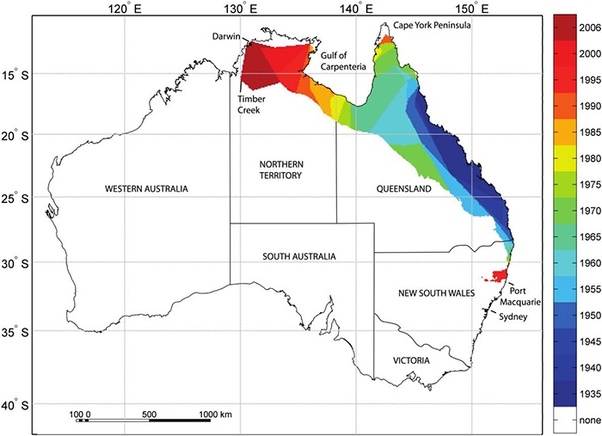 ABOVE: Map showing the spread of cane toads across Australia over time
SOURCE: ABC (Australian Broadcasting Corporation, not the American ABC)

So, the first examples of 'weird' selection are among cane toads themselves. Because there's so much 'unsettled' territory in front of them, there's a kind of spatial sorting that goes on at the edge of this invasion. As Professor Rick Shine put it, "All you get at the front are the offspring of the fastest toads who were themselves the offspring of the fastest toads who themselves were the offspring of the fastest toads. Genes for fast dispersal end up concentrated at the invasion front." So, the cane toads at the front of the invasion are remarkably different from other cane toads. They've evolved behaviorally to hop every night in straight lines (unlike other cane toads that more so meander), and they've evolved anatomically to have longer legs. Whereas the cane toads in Australia originally expanded their territory about 10 km per year when they were first released, the toads at the invasion front have now evolved to expand their territory at 55 km per year.

This is 'weird' because , in the words of Rick Shine on his website, "Unlike conventional evolution, that is driven by natural selection, we think that the accelerated toad invasion results from 'spatial sorting'. Genes for moving faster and further become concentrated at the increasingly fast-moving invasion front." Personally, I would think this is still natural selection - if there wasn't a benefit to the toads getting out in front of the competition, why would they be continually evolving to get faster and faster? There has to be some selection pressure for it. Still, it's interesting, and a type of spatial sorting that you don't see in established species.

The other example of weird natural selection involves snakes that would try to eat cane toads. Recall that cane toads are poisonous. Red bellied black snakes are sensitive to that poison, and can die from eating a cane toad. Now, if you're like me, you might think that the most 'straightforward' way to adapt to poisonous prey is to evolve immunity or at least resistance to the poison. And there is evidence that some amount of resistance has evolved. But what I think is more interesting, or 'weird', is that the red bellied black snakes living in proximity with the cane toads have evolved to have smaller heads. You see - the smaller the head, the smaller the toad that a snake can eat, and the smaller the toad, the smaller the dose of poison, so the snake is less likely to die. It makes sense, but it seemed novel to me when I first learned about it. 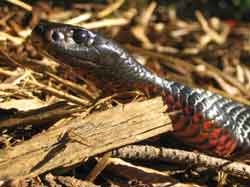 ABOVE: The Red-bellied Black Snake has evolved rapidly to help it deal with toxic cane toads
SOURCE: CaneToadsInOz.com

So, those are my examples of weird natural selection - spatial sorting in an invasive species, where the cane toads at the front of the invasion have evolved behaviors and anatomy that differentiate them from other cane toads, and a predator, red bellied black snakes, evolving to deal with a poisonous new species by evolving a smaller head to limit the size prey they can eat, thereby limiting the dose of poison they'll receive.

^^^^^^^^^^^^^^
2. Feral Hogs Change Color
https://www.quora.com/How-is-it-that-docile-farm-raised-pigs-when-let-into-the-wild-become-such-aggressive-wild-boars
Sure enough, feral hogs (see above) undergo morphological changes in response to their environment and living conditions, and have their bodies changed from the color pink (typical domestic swine coloration) to the color black (typical wild boar coloration);

The Moken people, who live at sea and on small islands, are incredible under the water.
Their children have developed the ability to hold their breath for long periods, slowing down their heart rates to help preserve oxygen.
They also know how to squint their eyes in special ways to see underwater.
They do this to help them hunt and fish.
Squinting their eyes alters the shape of their eyeball and trains their vision to help discern through the rippling waters.
A study from the University of Lund revealed that they can see twice as well underwater as an average person, simply through practice and development of this skill.
Being nomads, living off of the sea, and on small islands, they have become increasingly adapted to ocean living. Who knows, before long they�ll probably be growing gills :)