Relevance. Different types of Dolmens in Israel. Links to dolmens in Syria and Turkey

Additional Extracts:
These new discoveries support the suggestion that the dolmens of the Golan (north of the Yarmuk River) and Galilee should be distinguished from the dolmens east of the Southern Jordan Rift Valley. The Golan dolmens differ from the southern dolmens in the type of rock used for their construction (basalt vs limestone and sandstone), in size (they are typically much larger), in their design (typically passage tombs covered by a constructed tumulus), building technology (unworked stones), and in their chronology. It seems that the Golan and Galilee dolmens find their cultural roots in the north, in the megalithic traditions of Syria and Anatolia. In all of the many dolmens excavated and surveyed in the Golan and its escarpments, the earliest material unearthed clearly belongs to the Intermediate Bronze Age [24,25,34]. The Balkan megaliths are concentrated in the East and South-East regions of Bulgaria, some dolmens are registered also in North-East Greece and in North-West Turkey.

Menhirs are found in principle not only as isolated stone blocks but also as combinations of rock pillars fixed into the ground, each combination being planned and interpreted as a common sacralobject: alignments, cromlechs and grids

800 to 200 dolmens.
In Thrace only 'camera type' dolmens have been built with a great diversity of constructions

The most perfect example of stone plates circle on the Balkan Peninsula is situated in Mycenae and enveloping
the famous kings tombs. We present a review of the typology, construction and the present state of the Balkan megaliths (menhirs and dolmens) using examples from Bulgaria. The dolmen field in Sakar mount. is the most uniform and preserved in Bulgarian territory and gives good examples for studying the constructive principles in building dolmens. The need of preservation and protection of these objects is discussed as well as their socialization and inserting in the touristic routes. 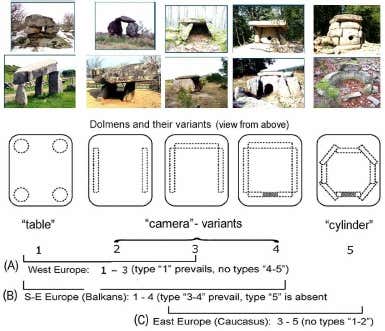