This week Cambridge University Press is publishing my new book, Undeclared Wars with Israel: East Germany and the West German Far Left, 1967-1989. I examine a spectrum of antagonism by the East German government and West German radical leftist organizations, ranging from hostile propaganda and diplomacy to military support for Israel's Arab armed adversaries, Â from 1967 to the end of the Cold War in 1989.

The book is about ideas and politics as well as about details of arms deliveries and military training.

Undeclared Wars with Israel provides new insights into the West German radicals who collaborated in "actions'" with Palestinian terrorist groups in Entebbe and in West Germany. The evidence confirms that East Germany, along with other member states in the Soviet Bloc, had a much greater impact on the conflict in the Middle East than has been generally known, and certainly played a more important role than the media savvy West German terrorist organizations.

Philanthropist and founder of leading healthcare company Vitabiotics says Britons should be proud of how the British Empire shaped India.
http://www.express.co.uk/news/uk/663663/millionaire-businessman-Kartar-Lalvani-British-Empire-India-country-Vitabiotics
By Katie Mansfield

Speaking about the book, the businessman said: 'I hope this publication will help motivate millions of Britons to be proud of the great role of their ancestors in the making of India and in helping it to become what India is today.'

He added: 'When the British arrived India was a fragmented country. The British helped build a new nation and the audacity and skills of this endured.

'Within half a century of independence are we not obliged to look back dispassionately and give credit where credit is due.

'It is worth pausing to consider what India would be like today if the British had chosen to stay at home.

'The British introduced the English language and created lasting political and social structures including the Indian civil service, professional army and independent judiciary.

'They also established the first universities and went on to found the first museums and libraries unknown to India before, engineering, medical colleges and hospitals.

'The British united and restored a fractured India - take for instance the battered and devastated city of Delhi that the British inherited in 1803 in contrast to the glorious New Delhi the restored capital of the unified progressive new India as left by the Raj in 1947.' 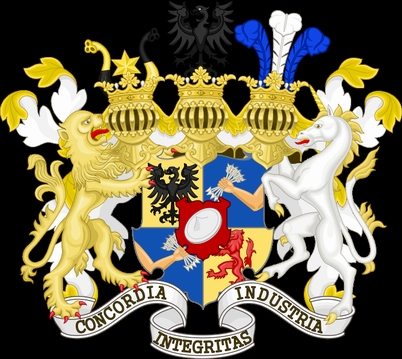 The expression 've-et' in Hebrew was probably pronounced in Ancient Times as "we-eth." This is how it is still rendered today by the Jews from Yemen.

Â This may have given rise to the English word "with".

Concerning the word "with":
The Online Etymological Dictionary tells us:

with (prep.)
Old English with "against, opposite, from, toward, by, near," a shortened form related to wither, from Proto-Germanic *withro- "against" (cognates: Old Saxon withar "against," Old Norse vithr "against, with, toward, at," Middle Dutch, Dutch weder, Dutch weer "again," Gothic withra "against, opposite"), from PIE *wi-tero-, literally "more apart," suffixed form of root *wi- "separation" (cognates: Sanskrit vi, Avestan vi- "asunder," Sanskrit vitaram "further, farther," Old Church Slavonic vutoru "other, second").

Note the expression,
# Often treated as a conjunction by ungrammatical writers and used where "and" would be correct.#
This is similar to the usage of "ve-et" in Hebrew!

The Online Etymological Dictionary tells us:
Welcome
welcome (n.) Old English wilcuma "welcome!" exclamation of kindly greeting, from earlier wilcuma (n.) "welcome guest," literally "one whose coming suits another's will or wish," from willa "pleasure, desire, choice" (see will (n.)) + cuma "guest," related to cuman (see come). Similar formation in Old High Germanwillicomo, Middle Dutch wellecome. Meaning "entertainment or public reception as a greeting" is recorded from 1530. The adjective is from Old Englishwilcuma. You're welcome as a formulaic response to thank you is attested from 1907. Welcome mat is from 1908; welcome wagon is attested from 1940.