Contents:
1. Islamophobia is Rational. Judeophobia is not! by Yair Davidiy
2. A 2,700-year-old greeting from a man called 'Matanyahu'
3. Ancient Jewish Depiction of Samson .
Stunning Synagogue Floor Discovered in Galilee by Gil Ronen

Islamophobia means Fear (or Hatred) of Islam.
Antisemitism literally implies antagonism to members of the Semitic Race BUT its usage is always applied to prejudice against Jews. In the past Antisemitism was known as Judeophobia. A rabid calumniator of the Jews, Wilhelm Marr, in the 1870s began using the term in its modern sense. Marr was a German Gentile journalist but he looked quite Jewish. This may somehow explain his later vicious hatred of the Jewish people.
Judeophobia has always existed. It has no rational explanation and may be instinctive.

Islamophobia has a logical justification. Islam really is a menace for non-Muslims.

Attempts are sometimes made to find a common denominator between Islamophobia and Antisemitism.
This to our mind is misleading and may even be dishonest, as explained below.
Â
Islamophobia may be justified on the basis of contemporary opinions and actions of Muslims.
There may be a degree of objectivity behind it. Practitioners of Islam and their ideological mentors often openly declare their intention to take over certain countries.
They work towards it and discuss their progress. They also oppress Christians, and females. They attack Jewish women and children when they can.
Muslims do not usually hide or deny their actions. They rather quote Islamic sources as justification for them.
Apologies for Islam, who state that all of the above is not a true reflection of the religion, usually emanate from sources that are not those of practising Muslims.

Antisemites on the other hand rationalize their hatred of Jews by claiming that Jews do all kinds of things and have various inimical goals.
The Antisemites cannot point to unequivocal facts. Neither can they find Jewish authorities or recognized Jewish sources that confirm their claims as to Jewish aims.
The impression is that they who hate Jews do not really care what the Jews do or want.Â  For them, any excuse to hurt Judah is a good one.

Those who are against Islam may point to Islamic doctrines that are taught, practised, and upheld.
Critics of the Jews cannot show negative aspects of Judaism according to Jewish sources and as Judaism is put into practise.
They point to mythical invented sources such as the Protocols of Zion. They then claim that day-to-day events, as they understand them, prove the truth of the myth.
By contrast, Critics of Islam can quote from the words of prominent Islamic teachers, show how the actions of Muslims reflect their teaching, and also find Muslim Sages who agree that such is Islam and such are its aims.

Fear of Islam may be explained as a reaction to reality.
Hatred of Jews springs from hatred of self and of others but at base it is not rational.
There is a difference.
In other words Islamophobia and Antisemitism should not be compared.
Islamophobia may emanate from fear of a real menace.
Antisemitism, on the other hand, is fueled by imagination and blood-lust.

There are those who wish to mollify the trepidation of Islam by drawing parallels to Judeophobia or Antisemitism as we now call it.
In effect such pro-Islamic apologists may be propagating in academic circles an unmerited tolerance for Islamic extremism .
The effects of this may be intended to lessen support for Israel and for the Zionist cause. It also leads to the adoption of an ambivalent stance towards Islamic acts of terror.
These pro-Islamic apologists may therefore justifiably be suspected of harboring a de facto anti-Semitic (i.e. anti-Jewish) agenda themselves.

Archaeologists find personal seal in remains of ancient building near the Western Wall, Excavation director: "The name [on the seal] Matanyahu, like the name Netanyahu, means giving to God.'
Yori Yalon and Israel Hayom Staff 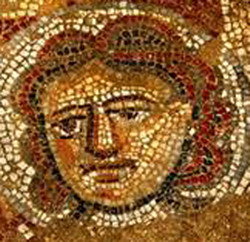 Extracts:
A monumental synagogue building dating to the Late Roman period (around the 4th-5th centuries CE) has been discovered in archaeological excavations at Huqoq in the Galilee.

Huqoq is an ancient Jewish village located approximately two to three miles west of Capernaum and Migdal (Magdala). This second season of excavations has revealed portions of a stunning mosaic floor decorating the interior of the synagogue building.

The mosaic, made of tiny colored stone cubes of the highest quality, includes a scene depicting Samson placing torches between the tails of foxes (as related in the book of Judges 15).

'This discovery is significant because only a small number of ancient [Late Roman] synagogue buildings are decorated with mosaics showing biblical scenes, and only two others have scenes with Samson [one is at another site just a couple of miles from Huqoq - ed.],' said Jodi Magness of the University of North Carolina at Chapel Hill, the Kenan Distinguished Professor in the department of religious studies in UNCï¿½s College of Arts and Sciences.

The excavations are being conducted by Prof. Magness and David Amit and Shua Kisilevitz of the Israel Antiquities Authority, under the sponsorship of UNC, Brigham Young University in Utah, Trinity University in Texas, the University of Oklahoma and the University of Toronto in Canada. Students and staff from UNC and the consortium schools are participating in the dig.