I love you and pray for you each day.  The Message is penetrating.  Many Americans are prostrate in repentance at this time.

My eyes are soaked with tears.  I want to be reconciled with God for the sake of the Little Ones.

It was your message that God first used to touch my heart. Praise be to God.  Blessed friend Yair.

I found your [re-]post on Jeroboam changing Sukkot to the 8th month interesting: (https://hebrewnations.com/articles/bible/sunday.html)

I had just been studying the topic of Aaron's sons, Abihu and Nadab, offering strange fire in their sacrifices. Your post was, to me, another example and admonition to us to be very attentive to how we approach the Most High in the manner He has prescribed and not to follow our own hearts and inclinations in a matter. The consequences to us can be very dire. While our Creator is our Father in heaven and is long-suffering and patient, He is holy. As the example of the consequences to Aaron's sons when they offered strange fire in the sacrifices, He is serious about how we approach Him. We must come before Him in reverence and awe. As He regathers us to Himself, we should be careful to do all that He requires after being lawless and serving our own fleshly desires for so many generations! (Ezekiel 36).

In his commentary, Josephus seems to indicate that Abihu and Nadab were engaged in a competition between themselves, and it caused them to not heed the injunctions of Moses regarding the sacrifices. Their hearts went astray, and it caused them their lives. Likewise in your example, Jeroboam devised in his own heart to change the set time for Sukkot when he instituted a feast for the sons of Israel in the 8th month. We need to watch our hearts that we do not miss the mark and substitute our own judgment and willfulness in a matter contrary to His commands, judgments and laws!

http://www.earlyjewishwritings.com/text/josephus/ant3.html  Josephus: Antiquities of the Jews - Book III, Chapter 8 "But on the eighth day he appointed a feast for the people and commanded them to offer sacrifice according to their ability. Accordingly, they contended one with another, and were ambitious to exceed each other in the sacrifices which they brought, and so fulfilled Moses's injunctions. But as the sacrifices lay upon the altar, a sudden fire was kindled from among them of its own accord and appeared to the sight like fire from a flash of lightning, and consumed whatsoever was upon the altar. Hereupon an affliction befell Aaron, considered as a man and a father, but was undergone by him with true fortitude; for he had indeed a firmness of soul in such accidents, and he thought this calamity came upon him according to God's will: for whereas he had four sons, as I said before, the two elder of them, Nadab and Abihu, did not bring those sacrifices which Moses bade them bring, but which they used to offer formerly, and were burnt to death. Now when the fire rushed upon them, and began to burn them, nobody could quench it. Accordingly they died in this manner."
Thank you for reposting your article!

So I copy and pasted the following statement here....
Mr. Yair Davidiy ....."  Since the founding of the State of Israel in 1948 the USA has often helped protect the State of Israel from destruction. The USA has not however really helped Israel expand her borders. On the contrary the USA has often forced Israel to give up territories it had liberated and to constrict her borders, but maybe that will change. Maybe the USA and Britain will help Israel expand her borders in the future as the MESSIAH SON OF JOSEPH is supposed to do. Ingathers the Exiles 'Kol HaTor' says [2.40] 'His [i.e. Joseph's] bow abode in strength' (Genesis 49;24). This should be an important principle for us. We have to stand obstinately strong in the holy work of gathering in the exiles which is the task of the first redeemer [i.e. of the MESSIAH SON OF JOSEPH]. Purifies the Land of Israel 'Kol HaTor' says [2.41] And Joseph was governor over the land (Genesis 42;6). This means he will overcome all the forces of impurity. This is one of the great tasks of the First Redeemer [of the MESSIAH SON OF JOSEPH]: to extirpate the spirit of impurity from the country by means of settling the Holy Land. When the Holy Land is not settled [with Israelites] a spirit of impurity settles over it. [When the Holy Land is settled with Israelites the Land becomes pure]. Joshua ben Nun Was a Forerunner  Kol HaTor says [2.44]

The First Redeemer [MESSIAH SON OF JOSEPH] fights against Amalek with total warfare [he fights against the forces of anti-Semitism]. This was the task of Joshua ben Nun who was [a forerunner and ancestor of] the Messiah Son of Joseph. Aroused by Elijah 'Kol HaTor' says [2.71] 'Behold I will send you my prophet Elijah, and he will return the hearts of the fathers to their sons' (Malachi 4). One of the tasks of Elijah is to arouse the spirit of the MESSIAH SON OF JOSEPH. Comment:

[Malachi 4:5] BEHOLD, I WILL SEND YOU ELIJAH THE PROPHET BEFORE THE COMING OF THE GREAT AND DREADFUL DAY OF THE LORD: [Malachi 4:6] AND HE SHALL TURN THE HEART OF THE FATHERS TO THE CHILDREN, AND THE HEART OF THE CHILDREN TO THEIR FATHERS, LEST I COME AND SMITE THE EARTH WITH A CURSE." (Orthodox Jewish scholar and historian Mr. Yair Davidiy).

^^^^^^^^^^^^^^^^^
4. Rosh HaShana and Scripture
Based on the Bible and various Commentaries.
https://hebrewnations.com/articles/biblerosh.html
Contents:
1. The Year has a Beginning and an End!
2. Objections to Rosh HaShanah and Biblical Feast Days
3. Different New Year Days.
4. We are now in a  Sabbatical Year!  Half the Farmers in Israel will be observing it!
5. Tishrei and the Ten Tribes.
6. Tishrei and a New Beginning
7. More Hints in the Biblical Text.

The God of Israel had threatened the Israelites that if they departed from the Right Track HE would hide HIMSELF:

Deuteronomy (NASB) 31: 16 The LORD said to Moses, 'Behold, you are about to  lie down with your fathers; and this people will arise and play the prostitute with the foreign gods of the land into the midst of which they are going, and they will abandon Me and break My covenant which I have made with them. 17 Then My anger will be kindled against them on that day, and I will abandon them and hide [Hebrew "HiSTaRti" from the root "STR"] My face from them, and they will be consumed, and many evils and troubles will find them; so they will say on that day, 'Is it not because our God is not among us that these evils have found us?' 18 But I will assuredly hide [Hebrew "HiSTaRti" from the root "STR"] My face on that day because of all the evil that they will have done, for they will have turned away to other gods.

According to the Bible Codes the Hebrew name Sambation is linked is sich a way that it connects tot he word "Daniah" meaning Denmark in Modern Hebrew which is juxtaposed between the word "TEN" on opne side and again by the Same Wprd on the other side. Ten suggests the Ten TLost tribes who disappeared by and beyond the Sambation. We also found other associations of SAMBATION with TEN TRIBES, with JOSEPH, and with AMERIKA. 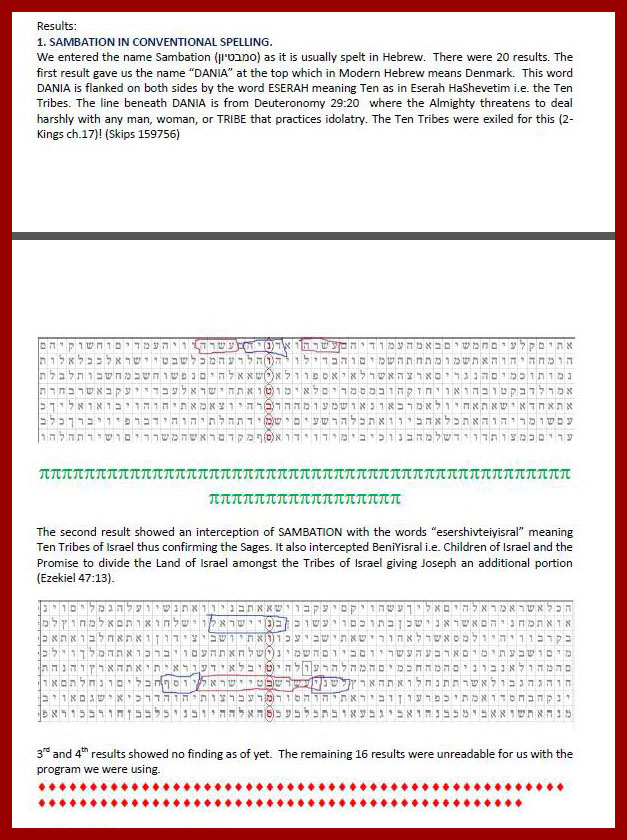 Malachi 3: 10 Bring all the tithes into the storehouse, That there may be food in My house, And try Me now in this,Says the LORD of Hosts, 'If I will not open for you the windows of heaven.  and pour out for you a blessing until it overflows.