Is there apartheid in Hebron, West Bank? Are Arabs and Jews treated the same there?
https://www.quora.com/Is-there-apartheid-in-Hebron-West-Bank-Are-Arabs-and-Jews-treated-the-same-there/answer/Yair-Davidiy
^^^^^^^^^^^^^^^^^^^^^^^^^^^^^
2. New Video Clip.
Yair Davidiy: Naftali, Scandinavia, and Canaan
https://www.youtube.com/watch?v=tBIs26jOLbM&t=194s
Duration: 41.56 minutes.
Updated Sub-Titles.
The Tribe of Naftali is to be found in Norway. Other Israelite  Tribes are present in neighboring Scandinavian countries.
Some of these nations have been at times pro-Jewish and on other occasions reserved about  the Jews in the past. At present some of them contain elements that spread anti-Jewish libels and calumnies
about the Jewish State of Israel. Part of the reason for this may be traced to the dominance of women in their leadership. Other more important factors however are also responsible. These include the presence
of non-Israelites and Canaanites who intermixed with their ancestors. All Israelite Entities today have this problem. Hasidic Rabbis in the past opined that we all have some of this within us and need to overcome it by improving ourselves.
This applies to both Jews from Judah and Israelite Descendants from the Lost Ten Tribes.
See:
Norway and Naftali. Points to Note
https://hebrewnations.com/articles/tribes/norwaypoints.html

Watcher
The word Viking means free king. King/kung in Scandinavic language comes from the old Asian word khun which means ruler/monarch.
===========
Analgesic Balm
The problem with demonizing Germans is to ignore the hundreds of thousands of US, Canadian, Australian, Kiwi, and even British soldiers of German ancestry who fought Hitler.
===========
anita vanput
The date of this video is many years.Are you still with us ? Indeed ,looks like there is hidden Israelite  ancestry. Idk if it is Jewish.It is a good time to know, imho.Thank you ,Rabbi.
^^^^^^^^^^^^^^
4. New Article.
Nordic Links.
More Notes on Naftali and Norway.
https://hebrewnations.com/articles/tribes/nordic.html
Contents:
1. Naftali and Neptune.
2. Norway and the Fjord Horse.
3. Thor Heyerdahl, and Azerbaijan
4. Dan and Naphtali in Scandinavia
5. Hebrew Warriors - A valuable source on the Israelite origins of many in Scandinavia.
^^^^^^^^^^^^^^
5. "Hebrew Warriors.  The Khazars"
by Yair Davidiy, Jerusalem, 2019
218 pages.
https://hebrewnations.com/publications/books/warriors.html
ANYONE IN OUR TIME WHO WISHES TO KNOW ABOUT THE TEN LOST TRIBES OF ISRAEL AND WHERE THEY WENT NEEDS THIS BOOK! 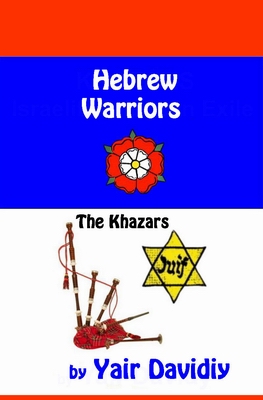 The "KHAZARS" became prominent in southern Russia and its neighborhood in the 600s to 900s CE.  They were  powerful with a far-reaching influence and well-developed civilization. They protected the Jews while giving full citizenship rights to Christians and Moslems who served them faithfully. The "KHAZARS" converted to Judaism and henceforth were Jewish.

The Khazars were related to the Picts of Scotland and to other groups who settled in Scandinavia, France, and the British Isles.
Proofs concerning the Israelite origins of the Khazars of necessity also do the same for the nations they were of kinship with.

The Khazars were descended from a mixture of remnants of the Ten Tribes, Jewish refugees whose religious affiliation had blurred, and Gentile descendants of Gomer. A movement to return to Judaism began among them. Due to the uncertainty of their lineages the Rabbis declared them all Gentiles and then converted them to Judaism as the Bible and Tradition allowed them to do.
Descendants of the Khazars may still be found among some Jewish communities but only as a minority element and indistinguishable from other Jews.
Nevertheless, it is both important and of interest to know more about them.
The Khazars are symbolic of the Israelite People in general. It should be worth our while to be aware of this.
That is what this book is for.

Genesis (NIV) 28:
18 Early the next morning Jacob took the stone he had placed under his head and set it up as a pillar and poured oil on top of it.
19 He called that place Bethel, though the city used to be called Luz.
20 Then Jacob made a vow, saying, "If God will be with me and will watch over me on this journey I am taking and will give me food to eat and clothes to wear
21 so that I return safely to my father's household, then the LORD will be my God
22 and this stone that I have set up as a pillar will be God's House, and of all that you give me I will give you a tenth."

The Lost Ten Tribes are now among Western Peoples. Brit-Am spreads this message and develops it through Bible Learning and Related Researches.
Descendants of the Lost Ten Tribes NEED to know who they are.
Help us do this.
Jacob associated the giving of tithes to his return to the House of His Father (28:31).
This too is the Brit-Am Message!

============
Malachi 3:
10 Bring all the tithes into the storehouse,
That there may be food in My house,
And try Me now in this,
Says the LORD of hosts,
'If I will not open for you the windows of heaven
And pour out for you such blessing
That there will not be room enough to receive it.
============
Proverbs 3:
9 Honor the LORD with your wealth
and with the first of all your produce,
10 so your barns will be filled with abundance,
and your vats will burst open with new wine.