Contents:
1. New YouTube Clip. Proverbs3. The Right Way.
2. Michelle Bowie: Jubilee Events 1917 and 1967?
3. The Rose (Shoshana) of Jacob Used Elsewhere. Picture.
4. Pictures taken from the roof of Aish HaTorah in Jerusalem.
5. Out of the mouth of babes and little boys. The [missile] Arrow of Judah and the bow of Ephraim.
6. Andy: David as a messianic shadow picture.
7. New Feature: Rabbi Akiva, the Bar Kokhba Revolt, and the Ten Tribes of Israel
by Alexander Zephyr (in Preparation).

The Almighty wants you to go in the Right Way because it is Good. It is good and right in itself and also it is the best thing for you.
See: Proverbs (BAC) ch.3

Shalom Yair,
As Torah is written with regard to Jubilees, it will be a coming back to the land as is written in Leviticus chapter 25. That being said, I have studied history a little over the years, but in recent months it has been a little more. Imagine my surprise when seeing a list of events concerning the land of Israel, I noticed this:
1. The Balfour Declaration of 1917
2. The Six Day War of 1967
I saw two things in common for which other significant 20th century events surrounding Israel, do not "add" up.
In both cases, these were events which allowed for the land to belong to Israel;The Balfour Declaration established the land as a national homeland.In the case of the Six Day War, to increase that land.
In both cases, they are 50 years apart. Coincidence? I wonder since I have been told and have read that in Hebrew, nothing is coincidental.
Which leads me to wonder.....is it possible that in 50 years from 1967, that Israel will regain more land back?
I found the possibility intriguing to consider to say the least. Certianly none of us could say for certain, but out of the 8 significant historical dates concerning the land of Israel, that have occurred in the 20th century, no others than those two can be calculated out at 50 years apart.I have gone over it a couple of times, but I am mathematically challenged so if anyone else comes up with something showing otherwise, it would be good to know, since I feel sometimes, the things I see might be more wishful thinking on my part :)
Since that will put us at the year 2017, one can only keep it in mind when that year rolls around.
If this is the case, then we all have a lot of work to do for the Kingdom to gather as many of Israel as possible. What I mean is to bring this knowldege of who they are to them.
Blessings, mb

3. The Rose (Shoshana) of Jacob Used Elsewhere. Picture.
The Brit-Am symbol is based on the Tudor Rose (symbol of England) and the Rose of Jacob symbol of all Israel.
See:
The Brit-Am and Tudor Roses
Recently we participated in an informal tour, led by Rabbi Avraham Feld, of parts of the Old City of Jerusalem.
In one of the Aish HaTorah Yeshivah Learning Halls Rabbi Feld pointed out a plaque on the wall. 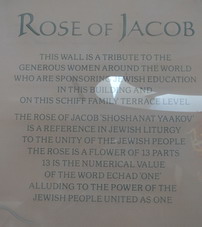 Text: Rose of Jacob
This plaque is a tribute to Jewish women around the world who are sponsoring Jewish education in this building and on the Schiff Family Terrace Level.
The Rose of Jacob, "Shoshanat Yaacov", is a reference in Jewish liturgy to the unity of the Jewish people. The rose is a flower of 13 parts. 13 is the numerical value of the word echad, "one", alluding to the power of the Jewish people united as one.

4. Pictures taken from the roof of Aish HaTorah in Jerusalem.

Yair on the roof. 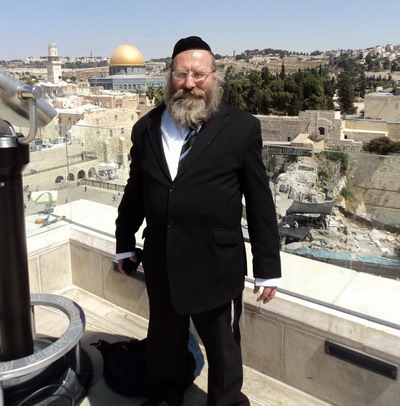 Model of the Temple 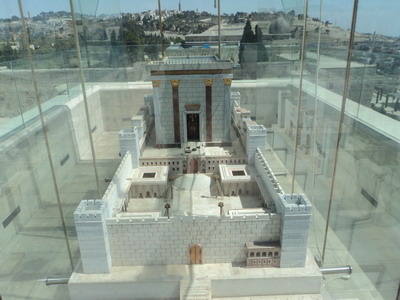 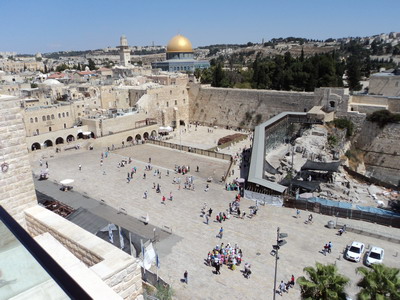 Rabbi Feld on the Roof.

Model of the Temple 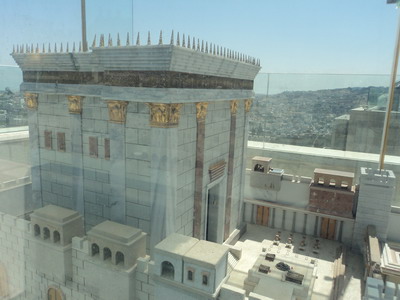 5. Out of the mouth of babes and little boys. The [missile] Arrow of Judah and the bow of Ephraim.

Psalms 8:
2 Out of the mouth of babes and nursing infants
You have ordained strength,
Because of Your enemies,
That You may silence the enemy and the avenger.

Shlomoh Eliyahu Feld (son of Rabbi Avraham Feld), aged 8 and a half, collects pictures of weapons and weapon system in a special scrap book.
Recently he received a picture depicting the Arrow Missile System.

From Wikipedia, the free encyclopedia
The Arrow or Hetz (Hebrew: , pronounced [h-ets]) is a family of anti-ballistic missiles... Jointly funded and produced by Israel and the United States..
The Arrow is considered one of the most advanced missile defense programs currently in existence.[8][11] It is the first operational missile defense system specifically designed and built to intercept and destroy ballistic missiles... Dr. Uzi Rubin: "The Arrow program used practically no U.S. technology, just U.S. money. It was almost entirely based on Israeli technology, though we bought some components in the U.S. because they were cheaper." (2003).

Little Shlomoh asked about the picture he held. He was told that the USA funded the development of the system for the use of Israel.
He commented, "Maybe this is the arrow of Ephraim to be fired by Judah"?

Zechariah 9:13 For I have bent Judah, My bow,
Fitted the bow with Ephraim,
And raised up your sons, O Zion,
Against your sons, O Greece,
And made you like the sword of a mighty man.

Yair,
If you are considering a book on King David, you might want to entertain the 10 tribes aspects of the study. I personally believe that the events that will surround a regathering of the 10 tribes in Israel (I think the 12 tribes will also be united outside of Israel, hence the Joseph/Judah messianic typology contrast) will mirror things that happened in David's life, especially if David is a messianic shadow picture. I think his journeys and places of battles are of particular significance (like the reconciliation in Hebron). Obviously, as David ran from Saul, Saul was out of line and the northern 10 were allied with him. I think there remain certain Saul/Benjamin/Philistinian/Modern Palestinian connections. It would be interesting hearing this study from a Hebrew perspective.

7. New Feature: Rabbi Akiva, the Bar Kokhba Revolt, and the Ten Tribes of Israel
by Alexander Zephyr (in Preparation).

A lengthy article of near-booklet size was sent to us under the above title. It contains interesting insights and some valuable information.
We intend to post it out in sections.