This was your first book at all, and without knowing what you wrote
then, nobody will understand what you have been publishing in your
successive books and articles.

I am very sure that many people worldwide are looking for that.

Yours faithfully,
Roberto Bravo
====
Brit-Am Reply: Lost Israelite Identity was our third book.
We publishedÂ  the first edition of "The Tribes" in 1993;Â  "Ephraim", 1995;
In 1996 was published "Lost Israelite Identity. The Hebrew Ancestry of Celtic Races".
This is a large work. For a while we were selling it in three different sections as .pdf files to serve as ebooks.
At present we are preparing a new edition of Role to Rule which may be ready soon and will be sold as an ebook.
After that we shall do the same for "Lost Israelite Identity". We are already preparing ourselves for this.
In the end it will be re-edited, new material added and it may be presented as two or three separate works.

The Celtic Council Of Australia
http://www.celticcouncil.org.au/

See below a depiction of stamps from the Isle of Mann showing different flags of the Celtic Nations.
Take fromÂ  the Celtic Council of Australia website. 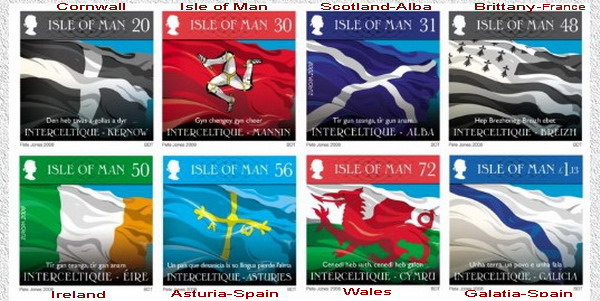 Additions to Investigative Article.
[Since writing the above lines there have been some new developments. The three men who were arrested were all released shortly afterwards. One of my neighbors whose judgment I feel could be relied upon knows one of those who was arrested and spoke with him. In his opinion the person is innocent. That is also what the police say. Acts may or may not have been committed. It is not certain. If they were, and there appears to be no real evidence that there ever were, the guilty parties have not been found . I also spoke with someone who has some experience with such cases in a counselling and law enforcement capacity. He also knew Yochanan. He agrees with us that there was nothing whatsoever about Yochanan that could give rise to such suspicions apart possibly from his living alone. ItÂ  may therefore be concluded that Yochanan was falsely accused. The question remains, WHY WAS HE MURDERED?]
====
====
4. Cristian Sildan: Are the Moabites in Romania?

I hope you had a nice holiday and will have a nice year 2013.
Now, the passage above is great!
It's exactly what I thought about Europe!
First, a basis of Japhetite peoplement that later went to Asia and America, especially North America.
Then, a strata of Pelasgians, sons of Peleg.
Then all sorts of Edomites, Israelites, Elamites, Assyrians etc.
It's just great to read that.
I personally have an intuition that Moabites must be quite well present here in Romania, besides the Pelasgians.
Zalmoxis of the Thracians could come from Zaul-Moxis, the god Mosch. That could mean "the old god" but could also be close to Kemosh, the god of the Moabites, who knows?
I also have an intuition that, if there are some Israelites around here, they must be mainly from Issachar. Central Europe has always been torn apart between Eastern and Western powers, like a donkey between two burdens. It's quite a place to be for at least some Issacharites.
Take care, and all the best.
Cristian
====
====
5. Ancient Star of David Delineated by Megalithic Stone Formations in Finland?
From: "T. Kupar"
Hiivanainen Stones (Rocks)

Shalom Yair!
It looks like the first settlers of the tribes, that moved north to the end of the earth (like Finland) also erected Stone markers. These stones are 999 metres apart, as you see in the pictures. If you continue with line of the each marker stone, it forms a Star of David. This can be seen only from the airplane. As the 4th Century map shows, the Finnish tribes were living in that area. I am including also the shortcut to the site, where anybody can look at the pictures and much more. Sorry, it's written in Finnish.
T. Kupar
http://www.sinikivi.com/foorumi/6-arkeologit/12862-hiivanaisenkivet.html?limit=10&start=30