However the reconciliation referred to appears to be limited to the Jewish people and Christians.

To me reconciliation does not mean the obliteration of differences but rather respect for those differences.

In this sense surely we all should hope for reconciliation with all peoples and this in the end should not be confined to Jews and Christians.
Â
In Genesis 22:18 it is said that in the seed of Abraham shall all the nations be blessed.

Is there no grounds for hope that one day there will be greater reconciled between all peopleÂ  whatever their history or faith?

Surely this was the ultimate hope of Jews and Christians? 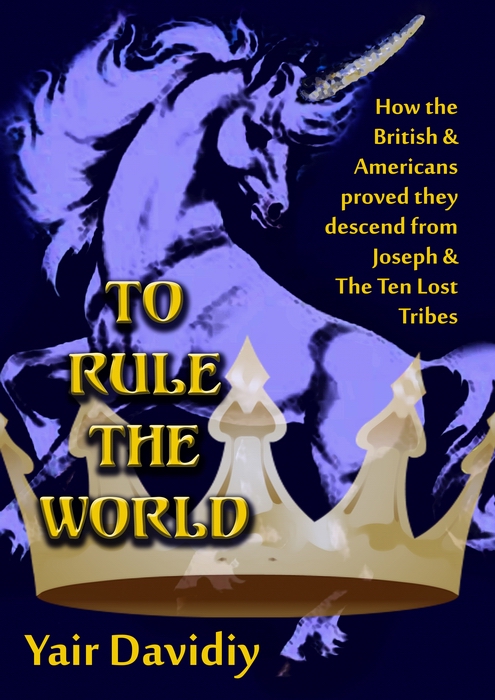 New Publication: "To Rule the World.

How the British and Americans Proved they Descend from Joseph and the Ten TribesÂ  ofÂ  Israel"
by Yair Davidiy, 198 pages, 2015
http://hebrewnations.com/publications/books/ruleworld.html
http://www.britam.org/RuleWorld.html
Special Introductory Price: $20
Joseph has a duty to reform mankind. It was prophesied that Joseph would be granted the ability to fulfil his national task. This book explores the Task of Joseph in the light of Biblical, Rabbinical, Historical, and Up-to-date Geo-Political analysis. This work contain important and interesting information much of which is not available elsewhere.

The Lost Ten Tribes went to the West. Descendants of Joseph are to be found primarily within the English-speaking nations of North America and the British Isles and their overseas offshoots.
Joseph had a predetermined role in world history to fulfill.
"To Rule the World" examines the destiny and duty of Joseph, how it was fulfilled, and what remains to be done. This in itself is proof according to the Bible of Israelite descent.
Joseph was required to become a blessing for others, a light to the world, and a civilizer of the non-Israelite heathens. The sons of Joseph, Ephraim and Manasseh, were each to have their own national distinctions. Joseph was blessed that he would possess the "Gates" of his adversaries meaning the control of strategic points exposing the vulnerabilities of potential enemies. This was a characteristic of British Imperial Policy in the past and if anything it is EVEN MORE a feature of US strategy in the present. Joseph was to be involved in Egypt, Africa, and India and to populate Australia and New Zealand.

Appendices include a full improved translation of an article from the Rabbinical Scholar, Nachmanides (1194 - c. 1270 CE), proving that the Lost Ten Tribes had been exiled, were in the North, and were destined to defeat the Heathen Edomite Powers and return to reunite with Judah.
A Prophesy (Deuteronomy 28:68) that the Exiles from the Land of Israel would be taken to Egypt in ships was fulfilled in Judah as recorded by secular historians.
Rabbi Avraham HaCohen Kook (1864 - 1935) was the first Chief Rabbi of the State of Israel and the Spiritual Guide for all Modern Religious Zionism. A translation of an article by Rabbi Kook confirms our understanding of the roleÂ  ofÂ  Joseph, and of Judah.

"To Rule the World" is at present the ONLY source where much of this information and more of equal importance may be available.
"To Rule the World" studies Biblical Messages concerning Joseph in the light ofÂ  Biblical Passages, Rabbinical Tradition,Â  up-to-date expert geo-political analysis, and historical anecdote.

This book is indispensable for an understanding of the USA, Britain, and the West today.
It is also interesting and very readable.
Buy it now!

The work has a specially designed cover by Estelle Schutte, a young mother in South Africa, and a veteran supporter of Brit-Am. The cover is a work of art in its own right and is consideredÂ  as probably the best we have ever had.

The price is not high and the work is worth it.

Purchases may be madeÂ  via PayPal or Surface Mail.
http://hebrewnations.com/publications/books/
http://www.britam.org/books.html