What a blessing to hear from Rabbi Avraham Feld. I hope we can hear from him more often.

Numbers (ESV) 1:
1 The LORD spoke to Moses in the wilderness of Sinai, in the tent of meeting, on the first day of the second month, in the second year after they had come out of the land of Egypt, saying, 2'Take a census of all the congregation of the people of Israel, by clans, by fathers' houses, according to the number of names, every male, head by head. ....
24 Of the people of Gad, their generations, by their clans, by their fathers' houses, according to the number of the names, from twenty years old and upward, all who were able to go to war: 25 those listed of the Tribe of Gad were 45,650. 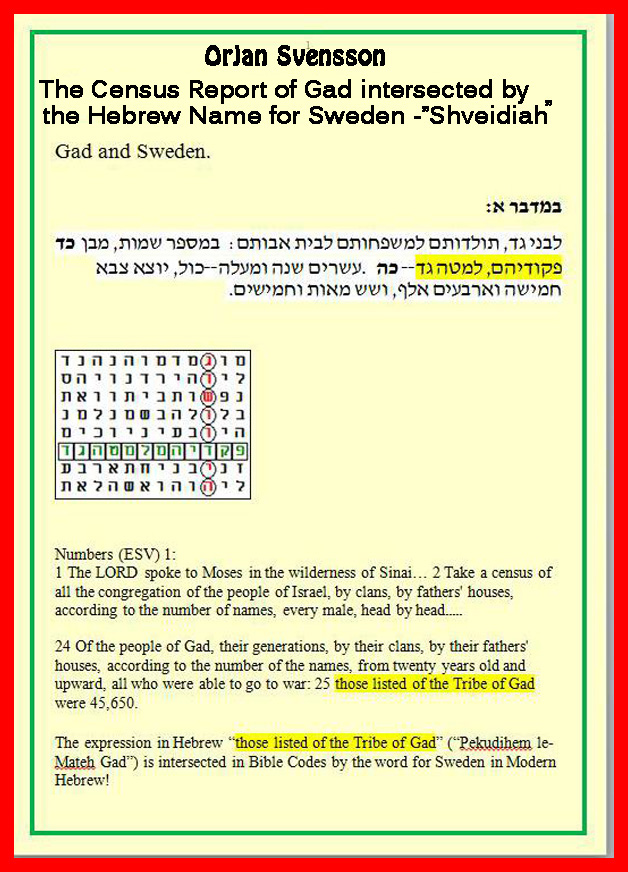 The name Angle is the same as Aegel and means Bull-Calf in Hebrew. It was a nickname for Ephraim.  We find this name used for "the Angles" who gave their name to England and to the term Anglo-Saxon.

The Term "Anglo-Saxon" as usually used today in the Media refers to a nationality that is predominantly white, speaks English, and is of British cultural affiliation. This term fits the same group of peoples we identify as descended from Joseph and whom the Bible often refers to as Ephraim. The USA and Britain with its offshoots are the Anglo-Saxon nations. They are also Ephraim in Biblical Terms. The Angle in Anglo-Saxon was also pronounced in Ancient Europe as "Aegel." In the Bible Ephraim is referred to as a bull-calf which in Hebrew is "Aegel." The Hebrew world Aegel could also be pronounced as Angle.  We thus have the two forms of the same name pronounced in two different ways amongst the Ancient Hebrews  concerning the Bull Calf meaning Ephraim AS WELL as amongst the ancient Angles and Saxons who gave us the term Anglo-Saxon. We identify these peoples as descended from Ephraim. We who believe in Divine Providence attach importance to names. It is therefore significant that the very same peoples we identify as physical descendants of Ephraim are still today identified by the same name for them as found in the Bible.

It seems to have been assumed (cf. Klaiber) that Aegel was a diminutive (nick-name) for an Angle. This however may be mistaken. The two words may in effect have been different ways of pronouncing the same word, as in Hebrew.
Angle is the source of the name "England," i.e. "Angle-Land," i.e. Land of the Bull-Calf, Land of Ephraim, Land of "John Bull", a nick-name for England!

Jeremiah 31:
18 Indeed I heard Ephraim pleading:
You disciplined me, and I took the discipline;
I was like a bull-calf [Hebrew: aegel] untrained.
Bring me back, let me come back,
for you are the LORD my God.

Isaiah 27:
10 For the fortified city is solitary,
a habitation deserted and forsaken, like the wilderness;
there does the bull-calf [Hebrew: aegel]  graze,
there lie down, and devour all its branches.