Contents:
1. New Article. The Hebrew Khazars
Reply to Claim that Khazars Did Not Become Jewish.
2. Proverbs 19:15-18 Do What You Can While You Are Able!
3. Appreciated YouTube Clip

Contents:
1. New Academic Claim that the Khazars Did not Become Jewish
2. Academic Monopoly on Access to Information Perpetuates a Tyranny of Prejudice Based on Class Warfare!Â  The Real Revolution is on the Way! Be Warned.
3. Probably The Best Book Ever Written on the Subject was Our Own!
4. Proofs from Archaeological Findings and Historical Sources that the Khazars Became Jewish.

A lot of information is out there but often only those with the university connections are allowed to access it.
Why do they do this?
What are they afraid of?
Most of them are left-wing pink liberals with rich antecedents whose generosity ends at the portals of knowledge.
They speak of democracy and of equal rights BUT when it touches, even in a peripheral manner, on their own specialities it becomes a different story. 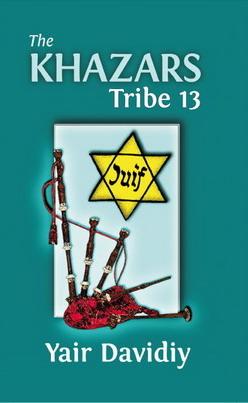 The Khazars. Tribe 13 is Â a good book containing valuable, otherwise not available, information.
It is well written, humorous, and revealing.
It is also disappearing. The book sells and it gets lost.
Some books seem to have a life of their own.
The Khazars. Tribe 13 is about a portion of the Ten Lost Tribes. The book does that. It gets lost. ...
It is a disappearing object.... A few copies are still available. Buy it while you can...

In Sweden a coin was found (part of the Spillings Hoard) dating fromÂ  830 to 840 CE.Â  Markings show its provenance was from the Kingdom of the Khazars, a realm in southern Russia between the Black and Caspian seas. It was an imitation of Arab coins that at the time passed for common currency. It bore anÂ Â  Arabic inscription reading ''Moses is the messenger of God". This apparently was a Jewish variant on the Islamic credo "Mohammed is the messenger of God."

Eldad HaDani (ca. 850 CE) , himself a Khazar, said the Khazars came from Simeon and Manasseh.Â  ....
The Schecter Text, written by a Khazar, refers to the Khazars as Jews descended in part from converts from the Tribe of Simeon.
Â The Midrashic-Rabbinical source, Akton De Mar Yaakov, confirms the Schecter Text....
The Cochin Scroll gives the Khazar origin as from Simeon and Manasseh....
Arab sources (Ibn Fadlan, Maquadasisi, Ibn Hawkal, Masudi) identify the Khazars as Jews.
The Russian Chronicle and Russian folklore also identify Khazars as Hebrews or as Jews....
Â Â Â Â Â Â Â Â  We may also add to our list of sources affirming an Israelite origin for the Khazars identifications of Khazar Areas being those of the Lost Ten Tribes. ... Mountains of Darkness, the Mountains of Snow, etc....The Sambation River ... Dneister River. ... Adiabene had been a place to which Israelites were taken by the Assyrians. All of these areas were points of origin of the Khazar Peoples.

Proverbs 19:
15 Laziness brings on deep sleep;
Â Â  an idle person will suffer hunger.
16 Those who keep the commandment will live;
Â Â  those who are heedless of their ways will die.
17 Whoever is kind to the poor lends to the Lord,
Â Â  and will be repaid in full.
18 Discipline your children while there is hope;
Â Â  do not set your heart on their destruction.

New comment on your video
Anglo Saxons and Angels
https://www.youtube.com/watch?v=aBA4mNdRVzg&google_comment_id=z12txfow3vjcwngyf04cc1t4wqisurnqb0c&google_view_type#gpluscomments
Jonathan Wind Dragon Baez
Thank you sir, I really appreciated this video with all my heart. God has revealed to me, that I am Israel, a descendant of the 10 lost tribes. I'm still learning, so thank you so much, for sharing.