Hebrews at the Ends of the Earth

The Lost Ten Tribes were to be found at the Geographical extremities of the Continental Masses.

Irish Hebrews at the Ends of the Earth. 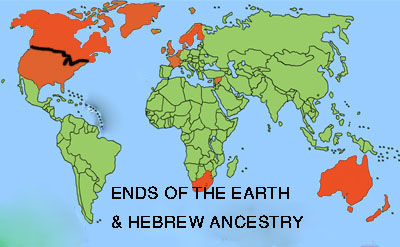 The Center of the Earth

The Land of Israel is at the Center of the Earth according to the Hebrew Bible (Ezekiel 38:12).
Ezekiel describes the attack of Gog and Magog against the Israelite Tribes in the End Times. The Israelites will have been gathered in and re-united as described in Ezekiel 37. Gog and Magog will intend to attack the Israelites who are described as living "in the midst of the land" .

Ezekiel 38: 10 Thus says the Lord God: 'On that day it shall come to pass that thoughts will arise in your mind, and you will make an evil plan: 11 You will say, I will go up against a land of unwalled villages; I will go to a peaceful people, who dwell safely, all of them dwelling without walls, and having neither bars nor gates'' 12 to take plunder and to take booty, to stretch out your hand against the waste places that are again inhabited, and against a people gathered from the nations, who have acquired livestock and goods, who dwell in the midst of the land.

In Hebrew the words translated as "in the midst of the land" are tabur ha-aretz literally the navel of the earth i.e. the geographical center.

One of the names of Ireland was Crioch Fuinidh signifying the Final or remote country or more literally the Limit of the World. Another name was  Inis Ealga signifying the noble or excellent island. These two names were BOTH mentioned by Isaiah in connection with the Ten Tribes. Isaiah linked the Ten Tribes with the end(s) of the world and with the most noble parts of it. e.g "But thou Israel, my servant Jacob whom I have chosen, the seed of Abraham my friend...Whom I have taken from the ENDS OF THE EARTH and called thee from the most noble parts hereof" (Isaiah 41:8-9). The Hebrew word "Atzil" is related to the Nordic "Aedil" meaning noble. So too, in Exodus 24:11 the plural of atzil is translated as nobles, "the nobles of the children of Israel".
We have here two of the names of Ireland linked with the Ten Tribes and the Ends of the World according to the Bible.

The Names of Ireland and the Ten Tribes.

ISLES OF THE SEA

Isles of the Blessed.

Another name mentioned in the Annals of the Four Masters was Insula Sacra or Sacred Isle.  This is another way of saying the Blessed Isles or Isles of the Blessed. Britain (and Ireland) were the Isles of the Blessed that in Jewish Tradition where were the Ten Tribes were to be found. This was also repeated in Roman Mythology. The Romans identified Israel with Saturn (Cronos). They said that Saturn had been driven out of the Middle East and had gone with his followers to one of the Isles of Britain.