Genesis and the Lost Ten Tribes of Israel (Scroll Down) 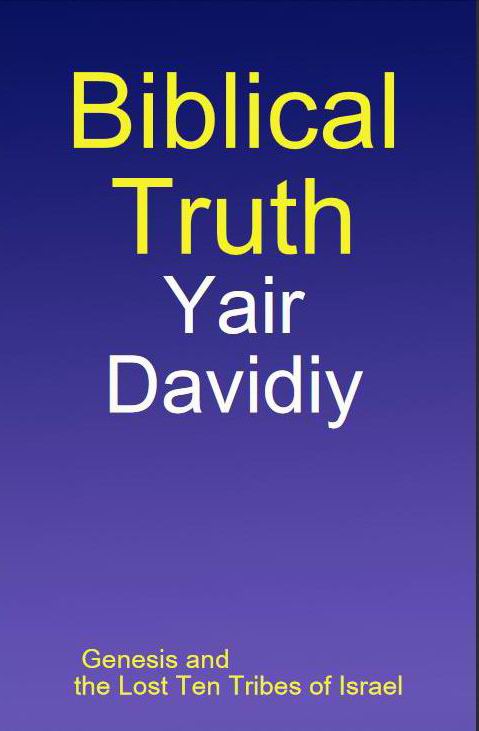 Biblical Truth goes through the Book of Genesis chapter by chapter and discusses every issue and verse that is pertinent to understanding who the Lost Ten Tribes are today.
These matters are considered alongside the verse(s) in question.
This is an important work and is designed to enhance Biblical study.
See Below: The New Edition, "Biblical Truth. Genesis and the Lost Ten Tribes of Israel," 2018, has been published. It should be available to the public within ca. 2 weeks or less.

The new work has 266 pages compared to ca. 240 pages in the first edition.
Unlike the first edition the present one does not include an Index (which took up ca. 10 pages) so more text with information has been  included.
On the other hand the print is slightly larger so this also accounts for some of the difference in size.

The first edition dates from 2003. It was quite good. The present 2nd edition is not much different from the first one. For the present edition some improvements have been made, extra maps and illustrations added, a,long with additional insights and information including updates that have become available since 2003.

The Bible is concerned mainly with the descendants of Israel. There were twelve tribes of Israel. Over the course of time the Children of Israel multiplied and became a great nation. Eventually ten out of the twelve tribes were exiled and lost their identity. Only part of the Israelites were not exiled by the Assyrians and remained as a distinctive entity - these are the Jews of "Judah". Most of the Israelites were exiled by the Assyrians and disappeared. They are commonly referred to as "The Lost Ten Tribes of Israel". Scripture tells us where these lost tribes are today. An explanation of how and where the Bible reveals to us the present-day identity of the Lost Tribes is the aim of "Biblical Truth".

"Biblical Truth" concentrates on evidence derived from Scripture, especially from the first book of the Bible, the Book of Genesis. The simple meaning of scripture is explained according to the Hebrew text as well as Rabbinical Tradition concerning this text, along with the opinions of revered Classical commentators, and relevant background information. The basic message is extremely important and in some ways the most significant revelation of this age. Genesis tells of the creation of the world and the emergence of the Israelite people. It tells us who the forefathers of the Hebrew people were, what they did, and what promises they received. The deeds of the Patriarchs and the events of their lives often foreshadow what would happen to their descendants. Part of their offspring lost their identity. We can discover who these "Lost Israelites" are by the prototypical actions of the forefathers and the blessings they received and comparing them with historical reality. This is what "Biblical Truth" does.

"Biblical Truth" tells us what the Book of Genesis says concerning the present-day identity, and future destiny, of the Israelite Tribes including those whose descendants are unaware of their Hebrew ancestry.

"Biblical Truth" is the Truth of the Bible. Genesis predicts that the descendants of Israel would number many millions, that all other peoples would be blessed through them, and be dependent upon them. They were to rule over other nations, become exceedingly prosperous and possess vast natural resources. Monarchs of several nations, ruling at one and the same time, were to emerge from them. This is now the case with the monarchies of Western Europe. There were twelve different tribes, ten of whom were to loose their identity. Each tribe had its own distinctive qualities. After being exiled, the tribes evolved into the dominant elements of several western nations. National characteristics of the countries in question reflect the original tribal distinctions. The USA with Britain and her daughters descend from Joseph who was to receive extra magnified blessings peculiar to their offspring.

The Israelites (especially Joseph) were to possess the "gate of his enemies" (Genesis 22:17) and "the gate of those who hate them" (Genesis 24:60). This means major strategic points giving an edge over all potential adversaries. Maintaining and expanding strategic overseas vantage points has become an intrinsic aspect of their foreign and military policy. The USA and Britain are essentially unique amongst World Empires in this respect. The USA and Britain have had this advantage and still do. Israelites (especially Joseph), were to become the most powerful nations in the world, and to bring a blessing to all the peoples of the earth. Genesis identifies the Lost Ten Tribes of Israel with the USA, Britain, and related nations.