The Israelite Identity of Celtic Races 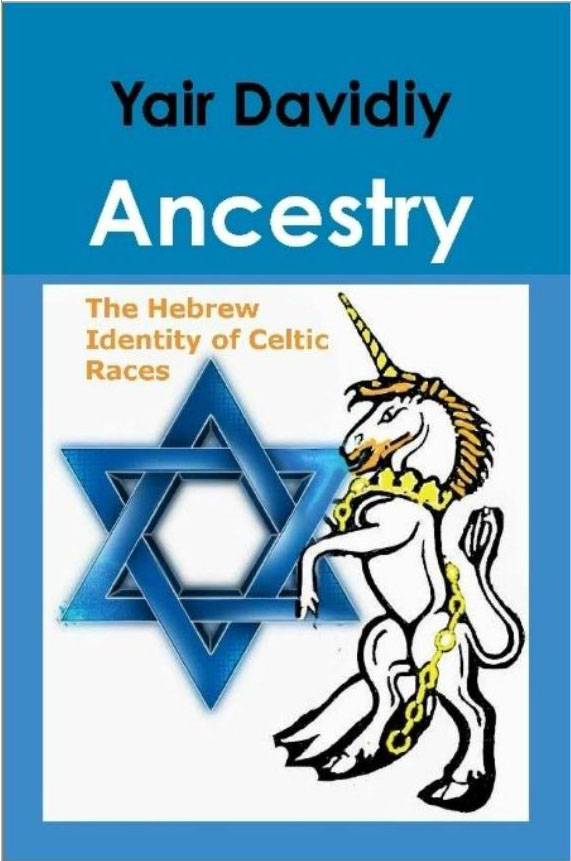 "Ancestry. The Hebrew Identity of Celtic Races,"  provides Proof that amongst Celtic Peoples (especially those of Britain and Ireland) were to be found many Hebrews from the Lost Ten Tribes. This still applies today, to their descendants.
The Ten Tribes were exiled in stages to a few major regions.
One section became part of the Cimmerians and helped give rise to Celtic Civilization. Another portion were transported under Assyrian-Edomite direction in Philistine (Minoan), and Phoenician (Tyrian) ships to Spain and from there moved to Ireland, Gaul, and Britain. This is confirmed by archaeology and written accounts including those from Ireland, Wales, Britain, and Scotland.
Celtic Mythology in the west encompasses proof of Israelite ancestry.
The Picts of Scotland were otherwise known as Agathyrsi. They were related to the Khazars who in Scythia recognized their Israelite origins and converted to Judaism. The Picts were also linked to people in the Netherlands.
Samuel Bochart (1600s) proved how the names of deities, religious beliefs, and so on of the Celts in Gaul and Britain may be traced to Phoenician influence. This in effect meant Israelite Ancestry.
The Celts did not call themselves "Celts" but rather "Iberi" meaning "Hebrews" in the Hebrew tongue. Jewish legends help trace the Lost Ten Tribes to Celtic peoples. Numerous names associated with Celtic groups are similar to those associated with Tribal groupings among the Hebrews, e.g.   GEBER = Gabar of Manasseh;  Parissi = Peresh of Menasseh; Uladah (Ulster) = Eladah of Ephraim; Isru and Isurium (of Britain) = Israel; etc. The same applies with the names of gods and place-names.
Sources for the evidence  in this regard include the Geography of Ptolemy concerning the British Isles and other areas.
The Celts practised the Druidic Religion which has similarities with ancient Canaanite paganism as well as parallels to the Levites of Ancient Israel and the Pharisees of Judah. In Scotland there existed strong taboos against swine and other foods interdicted by the Bible. The languages of Celtic Ireland and Gaelic Scotland show Hebrew substructures and many words of Hebrew origin in their vocabularies.
The figure of Yair son of Manasseh who was a Biblical Patriarch reappears in Ireland and Scotland. Irish legends confirm the presence of Israelites among their ancestors.
The Tribes of Dan and of Judah had representatives among the ancient inhabitants of Ireland and Ulster.
Archaeological findings lend substance to the above conclusions. The dolmens describe a pathway of migration stretching from the general area of Ancient Israel to Western Europe.
This had been predicted by the Prophet Jeremiah concerning the Lost Ten Tribes and how they would return.

Jeremiah 31:
20  Is Ephraim My dear son?
Is he a delightful child?
Indeed, as often as I have spoken against him,
I certainly still remember him;
Therefore My heart yearns for him;
I will surely have mercy on him,  declares the LORD..

21 Set up for yourself roadmarks [Hebrew: "Tsionim," i.e. Megalithic Monuments],
Place for yourself guideposts [Hebrew: "Tamrurim," i.e. Cairns],
Direct your mind to the highway,
The way by which you went.
Return, O virgin of Israel,
Return to these your cities.

Jeremiah 31:20-21 in effect (in the light of Hebrew language analysis by Renowned Rabbinical Scholars of the Past) says that there will be a Pathway of DOLMENS (Megalthic Monuments) stretching from the Place of the Lost Ten Tribes in the End times all the way back to Israel.
Such a Pathway exists.

Jeremiah tells us to take notice of this, to set our heart to it.
It is PROOF of Israelite origin.
It provides the MEANS for  Lost Israelites to return to the cities that once belonged to them!!!!!

Proof from the Dolmens and evidence of such nature (Archaeology, history, mythology, linguistics, BIBLICAL EVIDENCE, Rabbinical indications , etc.) is what  this work , "Ancestry" (along with other Brit-Am publications) provides.

The Prophet Jeremiah says that this is what is needed!!!!!

The Prophet Jeremiah exhorts the Descendants of Israel in our time to take heed of this evidence!!!!!!! It concerns their "Ancestry."